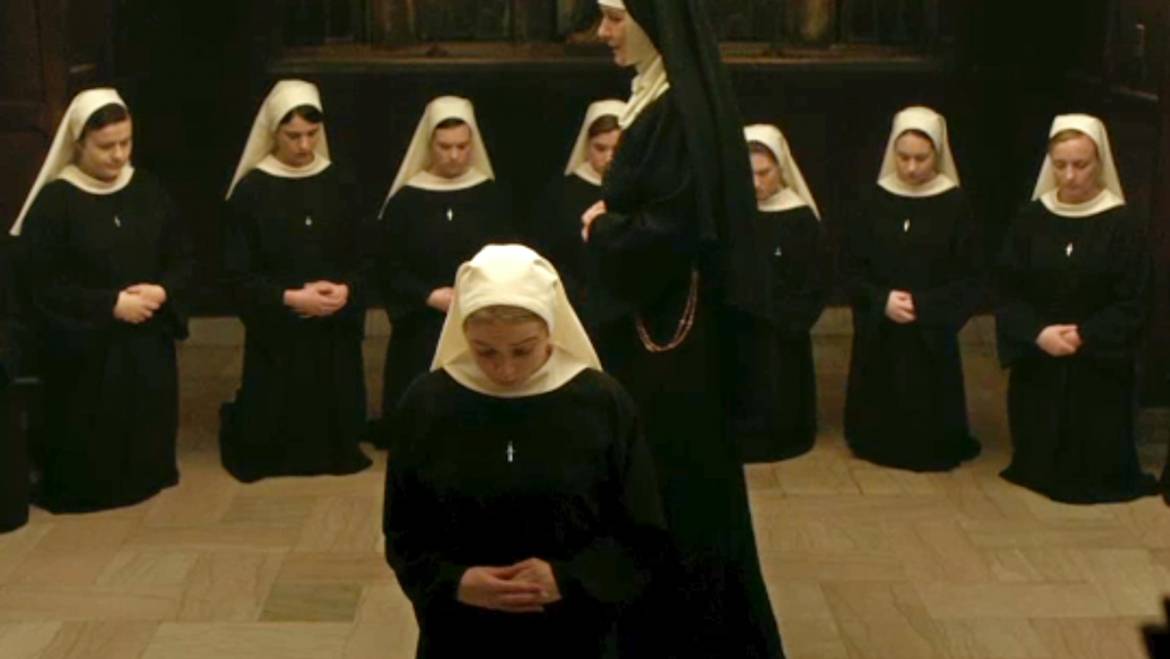 Margaret Betts’ Novitiate is the perfect example of what happens when you let an interesting theme get away from you. She knows the themes she’s working with, and she knows how to craft character (as seen in the Reverend Mother), but she doesn’t have a clear vision of where she’s going with it, and she certainly doesn’t know how to tie all the strings together into one coherent narrative. In the end, she leaves us with a capable, but flawed narrative about love, faith, and their similarities and differences.

Cathleen Harris (Margaret Qualley) has had a rough life. Raised in a broken home by a drunken father who leaves at a young age and a bitter mother (Julianne Nicholson) brazen in her atheism, Cathleen eventually finds the solace and peace she’s always seeked in her Catholic School education, praying in the school’s chapel. She eventually decides to become a nun with the Sisters of the Rose, a strict convent run by the stricter Reverend Mother Marie St. Clair (Melissa Leo) and the kindly-but-doubting Sister Mary Grace (Dianna Agron). As Cathleen begins her first two years of training in the order, we watch her and the sisters deal with their own personal doubts, the human urges they are required to overcome, and the aggression of the power-hungry Reverend Mother, herself strung out with doubts over the looming “threat” of Vatican II.

There’s a really good chance for an exploration of the way faith evolves in each person here, and for the most part, Betts takes advantage of it, through her script and her direction. By putting Cathleen in the middle of the struggle between her mother and the Reverend Mother, we get to see the median result of a woman’s faith in between the two polar extremes. Nora Harris has no faith whatsoever, having grown up in a broken home and left by a douche of a husband, but her attitude isn’t meant to be praised. Instead, she’s a lonely, bitter woman for whom we feel nothing but sorrow for her lot in life. She cannot understand her daughter because she cannot fathom someone feeling love (the way religion is supposed to make us feel). Meanwhile, the Reverend Mother is the opposite. She is the ultimate stickler for the rules, refusing to allow any change or straying from the beaten path, and refuses the novitiates in her charge the basic understanding necessary when they come to her to confess. While Nora shows the pain of a life without love and religion, Reverend Mother is what happens when you allow the dogma and the rules to become to strict, forcing Cathleen into a crisis of faith. What this teaches us, hopefully, is that religion has the capacity for net good, as long as it’s focused on the love and change it is intended for, and not used as a tool for intolerance, abuse, and more that it is often corrupted into. Furthermore, it is this idea of love that ends up driving the story forward. As a character, Cathleen’s sole purpose is to find love, having been deprived it as a child. When she eventually finds it with God, we are supposed to feel supportive and relieved that she finally has something to help that longing in her heart. However, as she begins to see the way that love is tainted by certain rules and regulations, so that we, like her, begin to doubt if that longing she feels is for a spiritual love or any love. It’s an interesting question, and watching the ways that Betts explores the eventual explosion of energy that eventually comes forth from a lack of love (rarely sexual, the longing Cathleen feels is, indeed, closer to intimacy and general human contact). These are interesting questions, and the way the film runs through them all is occasionally breathtaking to watch.

Meanwhile, the film’s final theme explores how doubt leads to stricter regimes inside institutions, and there may not be a better metaphor in the film than the behavior of the Reverend Mother. What Melissa Leo and Margaret Betts manage to put together in Reverend Mother Marie St. Clair is one of the most fascinating characters of the year. We are introduced to the Reverend Mother’s tyrannical grip in her opening monologue, where she implies her God complex, feeling she is better than anyone else (even priests, cardinals, and bishops) for hearing God’s instructions for us all. Everything from this moment on feels like some sort of brilliant, twisted power play. At her lowest moment, she breaks Grand Silence (the most important period of silence during the day for a nun) in order to berate and humiliate a novitiate for only just missing the beginning. It’s a brilliant, spit-filled scene of fire and brimstone, and is perfectly representative of her behavior. In another scene, she holds her own version of confession for the novitiates, using the information to emotionally crack and control them in the future. She’s a real piece of work, a cross between The Sound of Music’s Mother Superior and One Flew Over the Cuckoo’s Nest’s Nurse Ratched. However, the more brilliant moments, and the ones that drive to the heart of the film. The Reverend Mother has serious fears about the impending Vatican II, feeling it will take away the power the nuns have in the church. Furthermore, after thirty-plus years as a Bride of Christ, Marie is beginning to suffer from doubts, as seen in a series of brilliantly delivered monologues in the chapel. It is here that Betts’ vision comes to life. Afraid that everything she knows will be pulled out from under her, and afraid to comp to her own weaknesses and very-human doubts, the Reverend Mother doubles down and makes the normal, everyday rules of the Order into a form of strict penance. For every act of doubt in this movie, there is a scene of the character inflicting an ancient, angry punishment upon herself and others. Even Cathleen punishes her doubts with a whip. The film’s message is clear: when humans doubt the faith they know, they double down, and this can often lead to strict, violent results that could eventually harm everyone.

However, while these are interesting concepts, and the film is competently made, the film does still have some very serious flaws that keep it from reaching Paradise. For example, about two-thirds of the way through the film, it seems to lose sense of the plot altogether, seeming to forget the thematic look at faith and focusing on a half-formed relationship between the nuns that never really comes together. Some scenes never go anywhere at all, like a scene of a nun having a mental breakdown and walking through the mess hall naked. This scene is never explained, hinted at, or mentioned again after it ends, and I’m not sure it was necessary in the slightest. Meanwhile, Nora keeps entering the film at random, almost as an afterthought, except somehow transformed into a caring mother who just wants to save her daughter from torment. It’s an angle that doesn’t quite feel earned, and when it gets the coveted final shot of the film, as if to represent the themes as a whole, it seems to be a disservice to both character development and the film’s message. And speaking of that ending, the way it chooses to go for the most trite, clichéd ending you could possibly think of feels like the biggest cop out of the year. I really enjoyed what this film was setting up, it just left too many unfilled holes and unfinished themes for me to wholly commit to it.

I’d love to praise the cast of this movie, as it altogether feels fairly well-acted, and yet considering I can’t tell you a single thing about any of the nuns outside of Cathleen, I can’t tell you anything good about any of the individual performances. I can say that Margaret Qually is solid as Cathleen, bringing an emotional depth to her scenes, and Dianna Agron does her best to make us see her beyond her Glee days (she’s good, but there are mixed results to that question. Denis O’Hare had a solid scene as the Archbishop. And, of course, there’s Melissa Leo as Reverend Mother, who truly chews each and every bit of scenery put in front of her. She is capable of mastering the subtle(ish) scenes in the chapel and the more grand scenes in the courtyard. In the meantime, I thought Julianne Nicholson tried her hardest to make her role stand out, but it’s just a bad role, and as mentioned above, it never really comes into fruition. I’m not sure it’s quite her fault, but it is her character, and she does need to own that.

Novitiate is close to being a very good film. There’s a lot to dissect in the surprisingly simple story, from the observation of faith to the way it compares a growing church to the growing of young girls, through puberty or otherwise. I commend Margaret Betts for a valiant effort in her screenplay and direction, both of which show promise, but while it’s a respectable, well-acted film, it never quite gives itself over the way it needs to in order to be truly great.