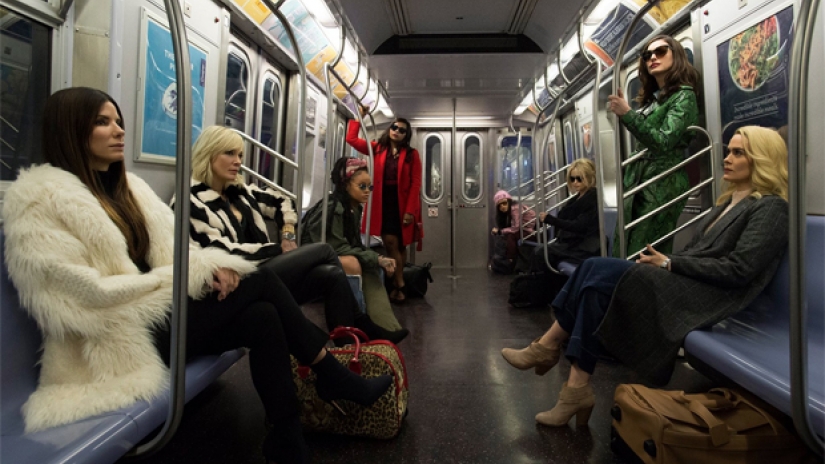 The 2001 Ocean’s Eleven was a perfect, breezy hit, giving audiences four suave heroes and seven suave-ish cohorts and an effortless, simple plot dressed up to look smart. The 2018 all-female follow-up, Ocean’s Eight, does away with any attempt to convince the audience it’s smarter than them, and it certainly isn’t perfect, but it does give audiences something its predecessor never did: eight equally-awesome leads kicking ass and taking names.

Debbie Ocean (Sandra Bullock), the younger sister of the infamous Danny, has finally been released from jail after serving a five year prison sentence. Betrayed, bitter, and filled with a zest for the old life, she decides to pull off her supposedly-late brother’s final heist. Together with a team including her best partner Lou (Cate Blanchett), a diamond expert (Mindy Kaling), a profiteer (Sarah Paulson), a pickpocket (Awkwafina), a hacker (Rihanna), and a fashion designer (Helena Bonham Carter), Debbie plans to use actress Daphne Kluger (Anne Hathaway) as a pawn to pull off the heist of the century: stealing a rare 19th-century diamond necklace from the Met Gala in plain sight!

I’m going to jump straight to the point and answer the question you’re all wondering: “Is this film as good or as fun as Ocean’s Eleven?” And the answer is simple, albeit with a caveat: No, but it’s not the cast’s fault. The problem with Ocean’s Eight is at the core of its storytelling, as well as its filmmaking. Quite simply, it takes too long to get to the heisting. Nobody in the theater gives a flying f*ck about how the team is assembled, or extended sequences of backstory. It is tacitly understood that the audience only cares about two things: how the characters are going to pull off the heist, and how cool they’re going to look doing it. By spending thirty minutes to introduce the plan, and then another thirty minutes to actually begin executing the heist. It’s way too much unnecessary exposition for the story, and it isn’t fleshed out enough to matter. Perhaps this first portion would be more interesting if director Gary Ross had the same visual flair that, say, Steven Soderbergh had directing the first one. Unfortunately, his direction remains par for the course throughout the entirety of the film’s run. Seeing them waste this much time in the beginning is absolutely baffling, especially considering there was not nearly enough buildup to make the twist at the end anywhere near as fun as it should be. Furthermore, and even more striking, one of the most overwhelming flaws in the film is the characters. Now, don’t get me wrong: the actresses in this film are wonderful, and they are the reason you should see this film (I will be dedicating my next two paragraphs to explaining this). However, there is not one discernable detail about any of these characters that makes them stand out. Sandra Bullock is a Sandra Bullock type. Anne Hathaway is an Anne Hathaway type. Mindy Kaling is a Mindy Kaling type. Rihanna is…actually, Rihanna is just straight up Rihanna. In a film where the character is king, you’ll constantly find yourself in awe of how charming these women are, and how awesome it is to see them pulling off their plan, but ultimately disappointed that you really don’t know or care about any of these clichéd archetypes (One wants to not live with her mom anymore! One is a wacky stoner! One is a bored housewife!). It’s a real shame that the characterization does not match up to the already-existing expectation of the actresses onscreen.

And yet – and YET – this is still an incredibly fun film. I’m not sure what it is about heist movies, but to quote Hannibal Smith: “I love it when a plan comes together.” When this film focuses on these women conning, there is actual music in the air (speaking of, the literal music is constantly good, from the score to a pitch-perfect usage of “These Boots Are Made For Walking”). An early sequence of Bullock pulling off a series of scams immediately after leaving prison is truly marvelous to watch. The series of plans and deceptions that lead to the museum is a true joy (including a one-take sequence set in the Met that is every bit the lighthearted zippiness that is needed earlier on). And the heist itself is just masterfully done, filled with joy and humor and wit in a way that makes it the quintessential summer breather, even if I wished they’d kept things minimal as opposed to introducing nonsense like “special 3D printer glasses.” And even beyond the heist, the film has a lot more fun with itself once they get rid of that pesky introduction. There’s a completely unnecessary, but absolutely funny recurring joke involving Tinder. Bullock and Blanchett have incredibly powerful chemistry, straddling the line between friendly banter and sexually charged banter with great ease (it’s one of those films where two characters stare at each other and you just want to yell “KISS!”). And it even has a throwaway line about the all-girls angle – when asked why they need an all-girls team, Debbie explains that when it comes to heists, “Hims get noticed. Hers don’t.” – that not only works in context, but actually makes a lot of sense. It might not be a perfect film, but let it not be said that this isn’t a fun film.

As for the acting, that’s really what this film is all about. I would only say a handful of people are actually great in this film, but as a whole, there isn’t one person that isn’t giving it their all and having a blast whenever they’re onscreen. Perhaps the most disappointing is Bullock, who for some reason is never allowed to fully revel in her charm and have a ball the way she has in the past. I mean, she’s not bad in the film – as stated above, her chemistry with the other women is charming and fun – it’s just that I wanted her to be her usual wildcard self, and instead I got a no-nonsense straight man. Much more entertaining are Blanchett and Awkwafina. Blanchett in this film is walking sex appeal, sporting a series of pantsuits and smirks that give her a level of effortless cool that not even Brad Pitt sported in the 2001 hit. Meanwhile, Awkwafina’s fast-talking pickpocket is so charming and funny and obnoxious in all of the best ways, and I can’t wait for her to inevitably become the star she’s destined to be. Most of the other women are serviceably fun inside of weak characters, like Kaling and Carter and Rihanna, while Sarah Paulson is a joy for the sole reason of being Sarah Paulson (she may otherwise be the weakest character of the bunch), but there’s really only one reason to see this film: Anne Hathaway. My God is Hathaway a joy in this film. She really does it all, from playing a spoof of airheaded actresses to acting and overreacting as the situation calls for it, and even dabbling in a level of physical comedy she hasn’t given us since her days in The Princess Diaries. It’s one of the year’s most exuberantly fun turns, and it is well worth the price of admission. Outside of the main eight, there are a series of cameos and supporting roles that range from “serviceable” to “enjoyable.” My personal favorites include James Corden, who tones down his more annoying schticks (see: The Emoji Movie) in order to play an intelligent rival for Bullock’s Ocean, and a quick surprise appearance by Anna Wintour (who I wish had shared a scene with Hathaway, considering The Devil Wears Prada is based on her).

Ocean’s Eight is what we expect out of a summer blockbuster. It’s dumb, but fun, with great actors and actresses that we enjoy spending two hours with. It’s the type of movie that will do well thanks to air conditioners and fine word of mouth before ending up in the perfect home: Saturday mornings on TBS and infinite DVD rentals. I’m happy I saw the film. I’m happy I got to spend time with these actresses. Do I wish they had discernable characters? Yes. Do I wish the film was better? Also yes. And do I think it’s still a fine enough feature filled with fun and wit? Yes again.