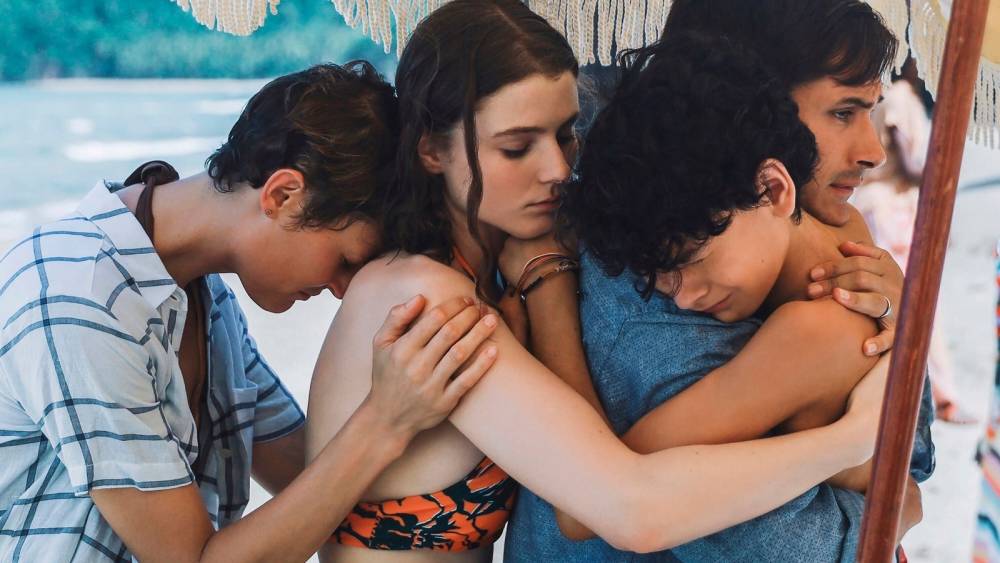 Hypothetically, the terror of a beach that rapidly ages you is a scary concept. It plays with fears of mortality and the rapid passage of time that every human being, deep down, is absolutely terrified about. And on paper, the ridiculousness of the idea is just too enticing. Thus, it made sense when M. Night Shyamalan’s Old became an Internet meme over the summer, inspiring jokes and cheers at his insane wit. But underneath the laughs and the ideas – at the end of the day, is Old actually any good? I’m not sure the answer is “yes,” but I do know one thing: Shyamalan is a special sort of idiot savant, and there’s something to be said for his simultaneous growth as a filmmaker and regression as a writer and “actors’ director.”

The Cappa family has recently won tickets to a tropical resort. Parents Guy (Bael Garcia Bernal) and Prisca (Vicky Krieps) are in the early stages of a divorce, and they want to prepare one final memory for their children, Maddox (Alexa Swinton) and Trent (Nolan River). At the urging of the hotel staff, the Cappas take a trip to a gorgeous secluded beach, along with the a doctor named Charles (Rufus Sewell), his young trophy wife Chrystal (Abbey Lee), and their young daughter Kara (Kylie Begley), as well as an older couple named Jarin (Ken Leung) and Patricia (Nikki Amuka-Bird). However, shortly after arrival, things begin to get…weird. There’s a strange man (Aaron Pierre) and a dead body adjoining the beach. Attempts to leave or swim outward are thwarted by sudden bouts of passing out. And strangest of all, the kids have disappeared, replaced with older children (Thomasin McKenzie, Alex Wolff, and Eliza Scanlen, respectively) who insist that they are the former toddlers and youngsters. The group soon realizes that time passes differently on the beach – every half-hour adds one year to your lifespan. And so the group must find a way to escape before nature runs its course and they inevitably expire.

Your first reaction while watching Old will most likely follow the line of thinking, “Holy sh*t, this is a big, huge, embarrassing failure like The Happening.” There is not one believable line of dialogue in the entire film, exacerbated by Shyamalan’s decision (or inability to do otherwise) to have the actors speak in stilted sentences with little to no emotion. Now, these aren’t necessarily dealbreakers in a good movie. Wes Anderson has his actors speak in stilted deliveries, and campy dialogue can be a clever touch in horror, like The Evil Dead or Malignant. But nothing in Old implies that campiness is what Shyamalan is actually going for.

Just how bad is the dialogue in Old? Within the first thirty seconds, a character states to one of her children “I can’t wait to [hear your voice] when you’re older!” Later, two characters yell at each other that “You’re always living in the past!” “Well you’re always living in the future!” Every single line is a form of ham-fisted dialogue, where characters refer to themselves as “doctor” or complain about their “calcium deficiency” approximately 10,000 times, just so when the payoff to their arc eventually arrives, you can point at the screen like an idiot and declare “Hey, I ‘member dat!”

It also doesn’t help Shyamalan’s script that the actors reading this dialogue are all over the board in terms of quality. Some actors, like Bernal and McKenzie, are actually pretty terrific in their roles. McKenzie in particular, after Leave No Trace and JoJo Rabbit, is the real deal. This might be her worst performance, and she’s still the best part by a longshot. Some actors, like Vicky Krieps, Eliza Scanlen, and Abbey Lee, simply suffer from being miscast. They aren’t bad, per se, but the script is so rough they had no real chance of overcoming it. Still other actors, like Rufus Sewell, Nikki Amuka-Bird, and Aaron Pierre (who, inexplicably, plays a rapper named Mid-Sized Sedan) are the perfect Shymalanian actors – not too good, and not too bad. And then there’s Alex Wolff, who isn’t good in the role of the older Trent, but he at least understands what type of film this is and leans in.

However, as rough as the script and the acting might be, there is a silver lining to Old that may come as a surprise to most viewers. As odd as it may sound, while the Oscar-nominated screenwriter’s talents have slowly regressed in that department over the years, his skills as a director have actually improved. As silly as the central concept about “the beach that makes you old may be,” Shyamalan actually manages to make the tension work, especially as things start to go wrong for the characters. Shyamalan isn’t afraid to lean into the darkness of the whole ordeal – not only does it turn pregnancy, tumors, and other everyday occurrences into harrowing ordeals, they often culminate in delightfully nasty conclusions, including holding an incision open bare-handed, or two six-year-olds having to scatter their newborn baby’s ashes (a sentence I never thought I’d write for this site).

The only thing more brilliant than that delectably wicked darkness is the surprisingly lighthearted and well-executed message about enjoying the terror and beauty in life, not taking things for granted, and keeping a childlike innocence, since the things you think are important (stupid little fights, work, etc.) ultimately aren’t. When coupled with Michael Gioulakis’s stunning cinematography (an area of filmmaking Shyamalan has struggled with in the past) and Brett M. Reed’s editing, it all comes together as a complete, unique film. Even if Shyamalan, a slave to his own worst impulses, butchers the ending with a twenty-minute-too-long “twist,” it still impresses enough as a directing standpoint to avoid feeling like a complete failure.

Old is a mixed bag of cinematic experiences. I was intrigued by the premise, but let down by the execution. I was dazzled by the filmmaking, but disappointed in the constant sloppiness. And the acting was so inconsistent that one could be dazzled one minute and staring dumbfoundedly the next. I don’t want to completely dismiss this film – there is something to be said to Shyamalan’s commitment to the bit, regardless of either his talents or the film’s quality. But at the end of the day, this is the rubric I judge by: this is a film that seems tailor-made for the drive-in experience. And every twenty minutes, I had to fight the urge to drive away. Old should make you feel a lot of things after it ends; aged is not one of them.

Old is now available to rent and buy on VOD; you can also own it on physical media starting Tuesday, October 19th