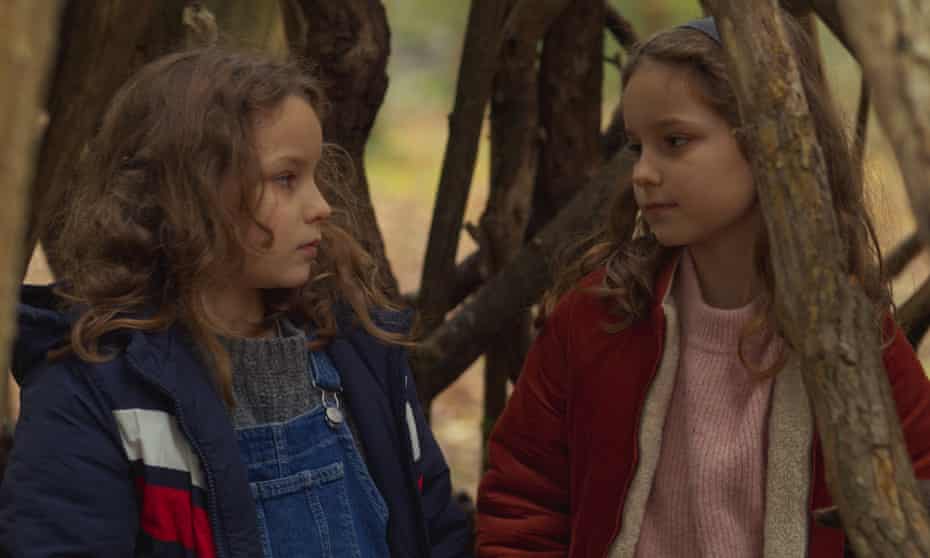 I’ve only seen one Céline Sciamma film to date, and it was 2019’s Portrait of a Lady on Fire. Therefore, I had no idea what to expect with Sciamma’s newest film, Petite Maman. Maman could have been so many different things after Sciamma’s sizzling 2019 romance, so I went in expecting almost everything. And still, somehow, the final production, a children’s fantasy fable, came as a complete surprise to me – a completely delightful parable that is so perfectly crafted you’ll easily be able to shake the feeling you’ve seen this type of story before.

In the aftermath of her maternal grandmother’s death, young Nelly (Joséphine Sanz) moves with her dad (Stéphane Varupenne) to pack up his wife’s childhood home. Nelly’s mother (Nina Meurisse) has disappeared into the night, overcome with grief and needing to process on her own. For Nelly, this is nothing new – her mother often has bouts of sadness, and her daughter has always struggled to know the real her. Isolated in the strange woods her mother once inhabited as a child, Nelly stumbles upon another young girl named Marion (Gabrielle Sanz), with whom Nelly shares lots of traits and hobbies, and who may possess the secret to healing Nelly’s relationship with her mother.

I suppose the only way to review this film is to delve into spoilers, but I’m not sure that’s exactly what’s happening here. Sciamma wears this film’s heart on its sleeve, and either the “twist” is so unimportant that she reveals it within the first ten minutes as obviously as possible, or the film is so haphazardly produced as to become hilariously obvious. Based on the caliber of the rest of the film, I’m choosing the former. After having introduced Nelly’s mother in a manic depressive state and quickly shuffling her off, we come to learn – almost immediately, as is the case with Nelly herself – that young Marion is, in fact, the child version of the mother (a “small mom”…”petite Maman,” get it?).

It’s actually a testament to Sciamma’s talents as a filmmaker that she can so seamlessly just introduce this concept and confidently say, “Yep. Just roll with it.” My first thought after the film ended was “This feels like a live-action Miyazaki movie” – something I learned from press notes later on was an intentional choice. The metaphor – and its overall execution – creates an entirely new fairy tale out of a classic story. It leans into its childlike innocence and emphasizes the whimsy and intelligence to keep things propulsive. After all, when it comes to fairy tales, the only rule isn’t to create something new. It’s simply that everyone (characters and audiences) understands the weirdness taking place, and nobody minds.

Sciamma uses her story to explore a litany of complex emotions through the eyes of an innocent. Maman tackles depression, loss, isolation, parenthood, and love in its remarkably short runtime. It’s about all the things that an adult is too afraid to say out loud, and yet must be said. Due to her mother’s struggles, and the recent weight of the heavy loss, Nelly finds herself afraid that she’s not close to her mom, and blames herself for the silent sadness she cannot understand. Isolated at her grandmother’s estate, the magic does as it often does in stories like this: finds the person who needs it most and tells them what they, deep down, already knew.

The friendship with young Marion gives Nelly new insight into her mother – insight she either hadn’t known or hadn’t bothered to ask about in the past. She learns about her hopes and fears, the similarities they shared, and a sense of connection and understanding that a 31-year-old just can’t convey. But more importantly, the idea of the younger mom allows her to speak more freely, opening up about her own thoughts to say the things a frightened Nelly needs to hear, but the adult Marion struggles to say out loud.

When Nelly explains how her mom had her young, Marion simply asks, “Did I want you?” When Nelly replies affirmatively, Marion casually replies, “I’m not surprised.” And perhaps most important of all, young Marion helps Nelly – a child unable to understand her mother’s depression – learn that she’s not to blame. “You didn’t invent my sadness,” she tells her, in one of the film’s pivotal moments.

All of this works because of Sciamma’s talents behind the camera. She has crafted a warm film in every sense of the word. Every shot, action, setting, and beyond has the feel of a warm blanket being draped over your shoulders. Claire Mathon’s cinematography oozes nostalgia, capturing the spirit and heart of childhood, as well as the beauty of the natural world. Her camera really captures the magic of childhood – one sequence following a trip on a raft down a local river features some of the most gorgeous camera work of the year.

And the editing by Julien Lacheray is laser-focused; the story zips along at a lightning-fast 72 minutes without blinking. The script, cinematography, and editing all work together congruently, aiding each other in the crafting of an original, adult story designed for children. It’s a masterful accomplishment in a rapidly dying medium.

Petite Maman relies heavily on its twin leads, Joséphine and Gabrielle Sanz. Obviously, being twins adds to the familial bond that the two characters share, but their abilities go deeper than just facial similarities and shared history. Both actresses are excellent in their roles – easily the best child performances this year. They possess the innocence and wonder and concerns that not only bring these two young girls to life, but carry the film through its fantastical moments.

As the grown-up mother, Meurisse isn’t onscreen a whole lot, but she makes the most of it. Her acting in the film’s opening moments, when she’s in the throes of grief and loss, do more to set the scene in three minutes time than most movies do with thirty. And Varupenne doesn’t have a whole lot to do as the dad other than casually smoke and crack the occasional dad joke, but honestly, that’s all he needs to do to bring warmth and realism to this film’s universe.

Petite Maman is simple storytelling at its best. It is a universal story about grief and family and love, told as a parable for adults and a lesson for children. Children’s films of this kind just aren’t made anymore, so when you see one, it is a revelation. And that is precisely what Sciamma has done here: she’s crafted an original, warm-hearted fable that kids and parents alike will love, whose heart is on its sleeve, and should rightfully go down as a new classic in a dying genre.