‘Pirates Of The Caribbean: Dead Men Tell No Tales’ Review 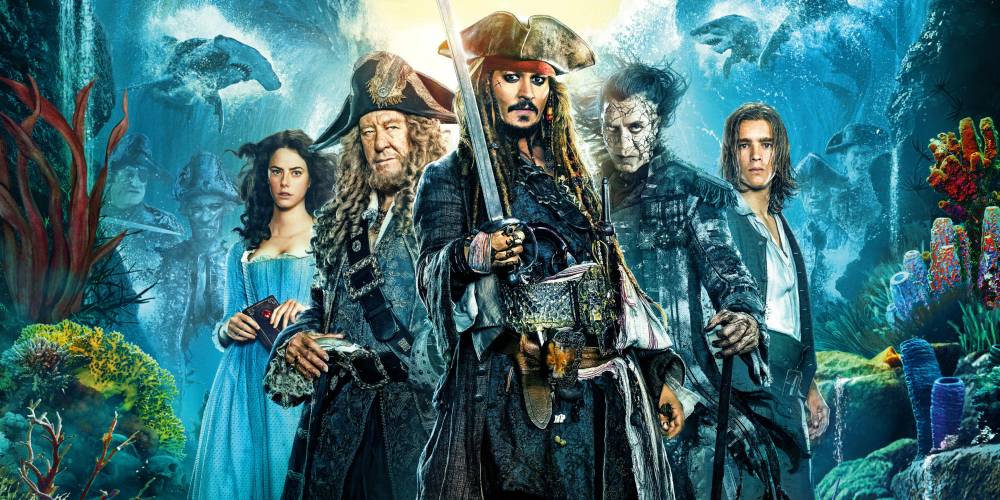 It would take a lot of effort for Pirates of the Caribbean: Dead Men Tell No Tales to be worse than On Stranger Tides. It’s such a low bar that this fifth movie in the saga of Jack Sparrow hurdles it with ease. Furthermore, contrary to mostly misleading (and some actually negative) reviews, it’s actually a mostly entertaining film, with decent action setpieces and funny dialogue. However, as a whole, it is still a fairly forgettable production, and while there’s nothing that will truly disappoint you, there’s also not enough to make it stand out.

A decade after the events of At World’s End, and five years after the events of On Stranger Tides, Jack Sparrow (Johnny Depp) has finally run out of luck. His heists are failing, his crew grows tired of his ineptitude, and he’s become such an alcoholic he can barely afford his trademark look. However, his luck may begin to change when he is located by Henry Turner (Brenton Thwaites), the son of former compatriots Will (Orlando Bloom) and Elizabeth (Keira Knightley). Henry is searching for the Trident of Poseidon, a mystical artifact that can break any curse at sea, in the hopes that it will free his father from Davy Jones’ curse. Along the way, they team up with the book smart Carina Smith (Kaya Scodelario), an astronomer shunned by society for her womanhood and intelligence. Together, they set out for their treasure, hunted by the British, Jack’s frenemy Barbossa (Geoffrey Rush), and a crew of ghostly pirates Jack had once defeated and disgraced, led by the sinister Captain Salazar (Javier Bardem).

Let’s get this out of the way from the get go. No, this is nowhere near as impressive as the original Curse of the Black Pearl, a film with no false turns that was consistently entertaining and intelligent. This is a film that has flaws, and large ones. These issues really lay at the feet of two important storytelling mediums: the story and the direction. Starting with the story, Dead Men Tell No Tales is much more coherent than its previous iteration (and perhaps even Dead Man’s Chest), but it does something that none of the films have done to date. Essentially, it breaks the cardinal rule of fantasy: never break your own logic. You see, in a fantasy world where the laws of science are defied on a frequent basis, the world builders essentially have to make up their own rules and limitations. Using the first film as an example, the skeleton pirates were unkillable, and only possessed flesh outside of the moonlight, but the minute blood was added, they would become human. Now, details could be added as they went (they could walk underwater, they could be blown up, it was unknown how much blood would be required to lift the curse), but the basic rules established could not be broken or changed. These logical rules don’t apply to Dead Men Tell No Tales, where the rules are constantly changed and rendered nonsensical due to random details, like a star island, or the ability to possess characters, and the exact nature of the ghosts’ abilities. Without a sense of logic, the plot becomes impossible to follow, and we begin to stop caring. What’s more tedious is the film’s tendency to “tell, not show.” Again using the first movie as an example, we are slowly introduced to the curse through hints of the pirates’ supernatural abilities, a brief explanation of how they were cursed, and then that stunning sequence where we learned of their skeletal nature. In this film, they spend most of their time time explaining things that would be so much more interesting to see. These seem like nitpicky complaints, but they are truly the two most important rules of storytelling, and it is a bit irritating that the film treats them with such disregard.

As for the direction, Joachim Rønning and Espen Sandberg aren’t necessarily incompetent in their jobs, but you can tell they’re relying a lot on gimmicks to cover their greenness in making blockbusters. They shy away from impressive swordfight sequences (gone are the days of the great meeting between Jack and Will, or the great three-way battle on top of the wheel) in order to focus on their strengths, and while that’s understandable, I wish they had gone a little more out of their wheelhouse to challenge themselves. Although perhaps this is for the best, considering almost every big action sequence is filmed in almost complete darkness, rendering it incomprehensible and unwatchable. What’s more, Rønning and Sandberg are clearly students of the “slo-mo makes it better” school of thought, because there are no less than seven sequences shot using the cliché, each more pointless than the last. I should not be declaring the action in a Pirates of the Caribbean movie to be the weakest part, and yet here we are.

However, while these are the two most infuriating aspects of the film, they do have some great strengths. The story provides us a Jack Sparrow origin story that could have been god-awful but instead feels refreshing. The directors add homages to other films that feel refreshing and awe-inspiring. Sparrow is first seen in a visual homage to Charlie Chaplin’s introduction in City Lights, and while that could be deemed as cinephilic blasphemy, I think Depp’s performance as Sparrow has earned the right to be considered in the same category as The Tramp. There’s an early set piece that is lifted directly from Fast Five, and while it’s not quite as ridiculously awesome as that film, the fact it is done with horses as Sparrow swaggers about has a certain charm. And what’s more, it has its moments of being really funny. It lands its jokes well, and it understands that Jack is always better as the third wheel to a sassy, yet endearing couple. This direction doesn’t necessarily make this a great film, but in terms of what we’re looking for in a summer blockbuster, the film gives exactly what we’re looking for and what we want. Nothing more, nothing less.

In terms of performance, we should obviously begin with Depp as Jack Sparrow. I confess that when the film first begins, Depp seems out of step with his previously Academy Award-nominated role, and while the jokes are there, the emphasis and effort aren’t. However, when the movie gets into the swing of things, Depp steps up, and in a big way. There’s a reason Sparrow is the most beloved film character of the century, and it’s because of that wondrous swagger and bombasticity that he brings to things. I personally loved a sequence involving a guillotine. Meanwhile, Rush is clearly still having the time of his life as Captain Barbossa. Yes, this is the first time he’s required to show off his dramatic chops for a few key scenes, but I personally enjoy the times where he’s being wonderfully eccentric, chewing scenery and flamboyantly upstaging Jack. Javier Bardem is doing his usual shtick as the sinister Spaniard, but it’s never too much, and while I’d prefer he have more to do, I certainly found him a more memorable villain than Blackbeard in On Stranger Tides. And the returning cast members, from Kevin McNally and Martin Klebba to Angus Barnett and Giles New, all give it their all in what are clearly their favorite roles to play. Amongst the newbies, Scodelario is perhaps the most enjoyable, providing echoes of Elizabeth Swann in her feisty astronomer who follows the facts and is hated by society for her brain. She’s a great character, and Scodelario is a great actress. As for Thwaites, I have mixed thoughts. Thwaites is an average actor, who was one of the worst parts of last year’s Gods of Egypt. I think he works here, especially because he looks like he’d be the child of Bloom and Knightley, but at times his best service is to show us that Bloom is an extremely underrated actor, as he made that one role he could play look easy. Oh, and speaking of Bloom and Knightley, they’re both in this movie (something spoiled in the trailers, so I’m not giving anything away), but don’t expect this to be an Original Trilogy reunion-they’re barely in it. At least their purpose is significant, and they’re not utterly wasted like Golshifteh Farahani, who gets two scenes that would be better off getting cut. Still, at least she tries, which is the best way to sum up every actor involved with this movie.

Despite my many issues with the film, I would say it’s an enjoyable way to spend two hours. It fits into the series in a much more enjoyable way than Stranger Tides, and it’s just entertaining enough that you won’t feel your time was wasted. However, if you’re looking for something as entertaining as the first film, you’ll just have to hope that the inevitable sixth film finally delivers. Until then, enjoy what you have. It’s not terrible.