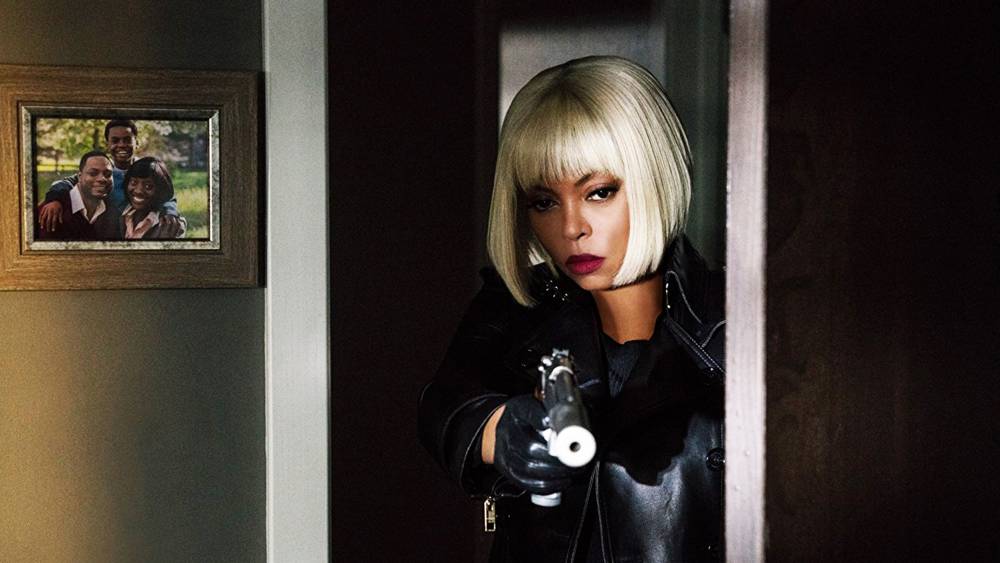 Sometimes it actually pays for a movie to embrace its “stupidity.” I don’t mean it needs to make bad decisions – I just mean that films that are light on plot can make up a lot of ground by just throwing their hands in the air and saying “Ok, this is ridiculous, I know. But look how much fun you’re having!” It’s why the second half of the Fast and the Furious films are box office sensations, why the first Transformer movie will always be entertaining, and why Guardians of the Galaxy is such a joy. It is in the moments that embrace their own ridiculousness that Proud Mary shines. Unfortunately, most of the film tries to hard to be “respectable,” and when caught between self-serious and ridiculous, as well as mixing in weak direction and editing, you end up with a project that never lives up to the promise that was established.

One year ago, Mary Goodwin (Taraji P. Henson), the best hitwoman for an organized crime family in Boston, performs a hit on a local bookie, leaving his young son Danny (Jahi Di’allo Winston) orphaned. Currently, Danny is in the employ of Uncle (Xander Berkeley), a capo in the Russian mob. Feeling guilty for her crimes, Mary takes young Danny in, and is willing to protect him from any threat that confronts them, be it Uncle, his boss Luka (Rade Serbedzija), or her own bosses, including Benny (Danny Glover) and her former lover Tom (Billy Brown).

Ok, so right off the bat, let’s address the biggest issue with this film: the story. In the opening seconds of the film, we are promised the type of film everybody in attendance truly wants. The credits appear in a stylish 70s font as “Papa Was A Rolling Stone” plays over a montage of Mary training. We then watch as she slowly sneak into an apartment and execute the unnamed bookie. This is slick, stylish, and cool – who cares about the plot? All we want is Taraji P. Henson being a badass while 70s Motown plays. However, as soon as that stylish sequence ended, the film became something far worse; it became a cliché. The audience is subjected to sequence after sequence of painful bonding sequences between Mary and her muse, of Danny acting the part of the stereotypical young urban black child (it is not hard to tell from the borderline-offensive portrayal that director Babak Najafi and writers John S. Newman, Christian Swegal, and Steve Antin aren’t in any way, shape, or form African-American), or of nonsensical mob relations. The first two-thirds of the film are premised on Mary’s actions and whether they will lead to a mob war, only to forget this plot completely as the film enters its third act. That isn’t inherently a problem – the MacGuffin is a trope for a reason. However, the point of a MacGuffin is to use a false idea, item, or premise to lead to the actual plot – if the entire plot is a MacGuffin, it kind of defeats the purpose. And when mixed with the fact that the film feels incompletely edited, jumping about and never able to show a complete thought, the film feels incomplete, incoherent, incomprehensible, and above all, boring.

Which is a real shame, because Taraji P. Henson really is great in this film. She feels like the type of hero we want – a strong badass with a wide range of emotion, game for any action sequence, comedic repartee, or dramatic monologue. The opening montage is truly fun to watch. Her interactions with Danny Glover and Billy Brown feel true, tense, and entertaining. And when the final sequence finally arrives, a shootout inside a warehouse set to Tina and Ike Turner’s “Proud Mary,” it feels like the film is delivering on a promise that it had made to the audience. However, this all leads back to the film’s biggest flaw: its lack of moments like this. A bad script and weak plot are givens in this type of pulp action thriller genre; we can live with this. However, the goal of these weaknesses is to string the audience along to get them from one stunning set piece to another. Proud Mary really only has the two. Why not give Henson more to do? Why not let her kick more ass? Why not spring for a few more pop songs to set the sequences to? I’m sure Berry Gordy would sell the rights to a couple of those songs without breaking the bank on the budget. The lack of excitement feels palpable, so that when Henson finally does get her big moment and transforms into Proud Mary, it feels unearned.

Honestly, outside of Henson, there’s nothing to write home about with this cast. Serbedzija and Berkeley are exactly what you’d expect from Russian mobsters – no more, no less. Margaret Avery and Neal McDonough are supposedly important characters, and yet their time onscreen perhaps adds up to a minute between the two of them. Still, at least they aren’t as wasted as Glover. Glover clearly doesn’t want to be here – almost every line he has is not only delivered emotionlessly, it seems like it was ADRed. I would hate to imagine how had he’d have to have mumbled for this to be the take they went with. Jahi Di’Allo Winston isn’t truly terrible, but every line out of his mouth seems like a racist caricature of an urban child. He seems like the type of character a racist would show to demonstrate what the inner cities look like. Honestly, other than Henson, the only actor giving anything close to a decent performance is Brown. At least Tom has an arc, a plot, and a personality. Even if I wasn’t fond of the character, Brown actually tried to give the audience something to work with.

I appreciate what Proud Mary wanted to be, I’m just disappointed in the final result. I feel like the writers of the film were watching Léon while listening to “Proud Mary” and had an idea. However, what they failed to understand is that Léon works not because of the plot, but because of Luc Besson’s stylistic decision-making. Najafi is as bland as can be with his filmmaking. And as much as I enjoyed that final sequence (I want all of my shootouts scored to classic Motown songs), I can’t shake the feeling that Taraji P. Henson deserves better. We as an audience probably do too.