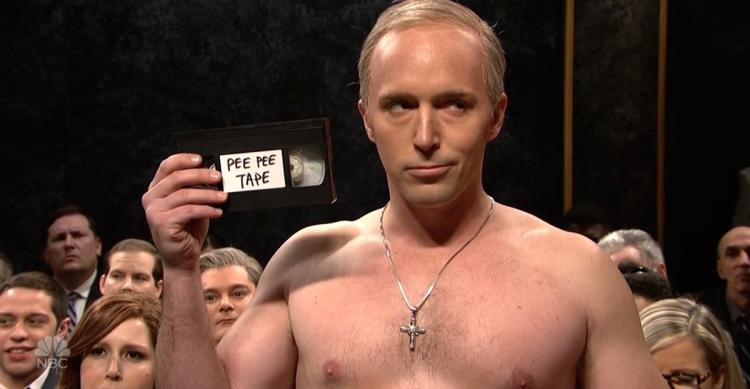 I haven’t done a Saturday Night Live Recap since before December. That’s not an indicator of the show’s quality, or a disinterest in the recaps; I’ve just had a very busy December. In a quick summary of the month, all three hosts-Emma Stone, John Cena, and Casey Affleck-were decent enough, but just didn’t jive with the material. Stone made the most of her role, keeping things light and fun, even if things never rose above a slight chuckle. John Cena had the energy to make his sketches work, but the writing was just really not there, leaving him high and dry. And Affleck was…well, Affleck. However, this isn’t to say that they failed to have a classic sketch all to themselves. Stone had the life-changing “Wells For Boys,” Cena had the not-as-great-but-still-good “Karate Kid” sketch (his impression of William Zabka is astounding), and Affleck had one of the funniest sketches of the year in “Dunkin’ Donuts.” I just wish every sketch lived up to the glory of those.

But this is a new year, with a new host. Felicity Jones is coming off of Rogue One: A Star Wars Story, which she is really good in. However, she only managed to teach us one thing last night: she is not a very good live performer. Sure, she tried her best, and occasionally found something great in the material (her first two sketches were pretty decent). But after stumbling over some very funny jokes in her monologue, she never seemed to recover, resorting to reading the teleprompter and staring nervously throughout.

Meanwhile, there’s also Alec Baldwin. This was the first Baldwin as Trump sketch that actually worked for me. Baldwin actually had an angle for this sketch, and there were actual jokes. It didn’t just feel like a wooden impression, the way they did with Obama, Carter, or Bob Dole. They actually found something funny in what they were doing, like the old sketches of Bush, Clinton or even Ford. Granted, this could just be because they had a week’s worth of craziness to deal with, but it still felt better than normal. I’m actually convinced that Tina Fey (who had a guest role in the opening monologue) helped write this cold open. The “You’re in” joke was right out of her playbook, and I can only imagine the twisted mind of Tina Fey being behind Beck Bennett as Putin holding up a video cassette labeled “Pee Pee Tape.” This was a good cold open, and if they continue on this road, the Trump material could be some of the best political satire they’ve done in twenty years.

And while we’re talking about political humor, I want to give a shout out to the Weekend Update segment. I’ve been critical of Colin Jost and Michael Che before, but they really stepped up in this past episode. Che had several funny jokes dealing with Trump, both in favor and in critique of the President Elect, but it was his monologue on race and the African-American community’s relationship with police that really stood out to me. It was funny, smart, and actually unifying as opposed to mean spirited. It was a refreshing change of pace for the show, and I for one enjoyed it.

Beck Bennett: Beck Bennett has really done his damndest to step into the role of the “lead male” in the cast. While he’s no Taran Killam, he still knows how to find the joke and make it work. As mentioned earlier, the image of him holding up the “Pee Pee Tape” is iconic, but it’s his work in other sketches that make him stand out. I loved him in the “Princess and the Curse” sketch, he kept a straight face through the “Theater” sketch (which is an accomplishment), he centered the “Beard Hunk” sketch, he stole the “Movie Interview” sketch (which is so spot on it’s not even funny), and he was phenomenal playing himself in that Weekend Update segment. I don’t care how you slice it, Bennett was the MVP last night.

Kenan Thompson: Thompson didn’t have a lot to do, but damn did he do it well. Truth be told, his Steve Harvey impression was his first appearance, but I can’t think of anything beyond his portrayal of Forrest Whitaker’s Saw Guerrera in Rogue One. It was such an odd role and performance, seeing Thompson have a field day with it made my night. Furthermore, I had a little trouble following the “Shondra and Malik” sketch, but from what I remember, he was funny and carried it. Every great SNL cast has a glue that keeps them all together, from Belushi to Hartman, and after tonight, I’m convinced now more than ever that Thompson is this cast’s glue.

Alec Baldwin: As mentioned before, I’ve liked Baldwin’s Trump impression, but I’ve been skeptical about the writing. He’s always done a good impression, but without memorable writing, the humor lies in “Oh, look, he kinda looks like the guy and sounds like the guy.” You need the writing to make it memorable. That’s what made the difference between Chevy Chase’s Ford, who looked nothing like the guy but had an angle, and Dan Aykroyd’s Carter, who seemed miscast and unfunny (maybe that’s just because I can’t think of a more boring President than Jimmy Carter). With this sketch, things really started to come together. Baldwin delivered his jokes perfectly, had the mannerisms down, and really just stole the show from the opening few minutes. I seriously cannot overstate how great that monologue on bringing back a “steady stream of jobs” is. It’s great writing, great delivery, and just a great sketch all around, and it only works because of Baldwin.

Mikey Day: It’s reaching a point where I’m going to have to start referring to Day as an “All Time Great.” I can’t think of this fantastic a breakout since Bennett and Mooney. And if I’m being honest, it might be the greatest breakout since Chris Farley. Day has always been known for his ability to deliver a fantastic non-sequiter, and that certainly shows in the final sketch of the night (where he plays the runner of a “Jokeyoke” seminar), as well as his fantastic portrayal of Donald Trump, Jr. (Side note: Alex Moffat’s catchphrase of “And I’m Eric” is already iconic). However, what’s really remarkable is his ability for physical comedy. The “Theater” sketch was an oddity, and I’m not sure it completely worked, but man, could I watch Day roll around that stage as an old man fighting his nurse all day. He’s a true comedy talent, and I can’t wait to watch him grow on this show.

Felicity Jones: Look, I don’t want to kick Jones too much while she’s down. She tried her hardest. She’s just not a very good live performer, and it shows throughout. She felt awkward, nervous, and wooden in most, if not all, sketches, and struggled with most accents that weren’t her natural British. I hope she gets a chance to come back to redeem herself in the future, but for now, it was a terrible outing as host.

Best Sketch: “The Princess and the Curse”-This is the kind of sketch I love. The ones where they have a very specific spoof built off of funny cast members and the host’s strengths, and building to some sort of misdirection. Seeing Kate McKinnon play a Maleficent-esque villain was something I never realized I wanted, and Felicity Jones makes an excellent princess. Seeing Bennett’s face when they reveal that the curse is that the Jones will gain fifteen pounds was outstanding, and seeing him try to rationalize it was heartbreaking and hilarious. But nothing was as hilarious as both Bennett and Jones’ response to McKinnon’s counteroffer. This is just a good sketch all around.

Had Promise: “Beard Hunk”-If you read my “What I Watched, What You Watched” section, you know that I love watching/making fun of The Bachelor. This season has been the funniest so far in terms of “Can I just steal you for a sec?” (Thanks, Corrine!), so it makes sense that they bring this great sketch back to allow the women on the show to demonstrate their comedic chops. Aidy Bryant is great as the sexually aggressive one, and Kate McKinnon was good as the wife, but I feel this was the one time Jones actually had a chance to shine. She really felt like she could be a character on The Bachelor, and it made the sketch better. Unfortunately, they played things a little too safe. The joke becomes too one-note as it goes on, and I almost wish that they had branched out to make fun of other aspects of the show. It goes on for too long, and it just leaves you wondering what could have been if the jokes were a little stronger.

Worst Sketch: “Susan B. Anthony”-the idea of McKinnon playing Susan B. Anthony is comedy gold. However, everything about this sketch just felt off. Jones missed a cue, the setup seemed lazy, and the premise of “Anthony doesn’t know about 21st century technology” just seems lazy and forced. Sure, there’s some funny humor that could come from that final line, but that should have been the whole sketch, not the Big Finish. Man, this was such a waste of an opportunity, and it just leaves me feeling angry instead of impressed.

I will be posting four sketches below: the two best from the month of December, Baldwin’s sketch as Trump, and the Best Sketch of the night.