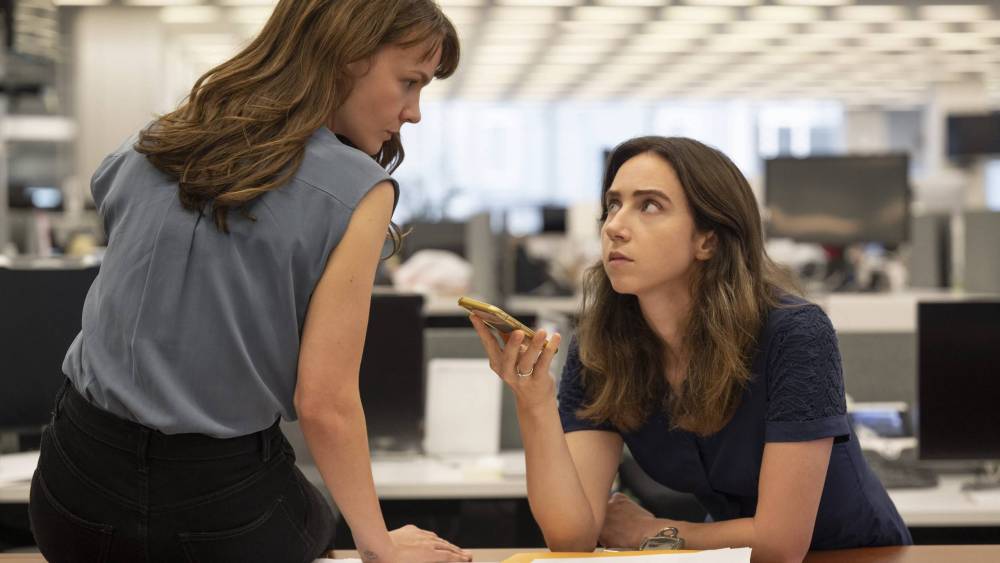 The line between “good” and “great” is thin to the point of invisibility, especially in cinema. A film can have all the pieces of a great film – an important story, a stellar cast, strong direction – but without that extra “something,” it never quite reaches the greatest it possesses. She Said, Maria Schrader’s film about the New York Times’ investigation into Harvey Weinstein, is a good film. But whether it’s a stronger script or a humbler angle, something holds it back from being the great film it could have been.

In early 2017, the New York Times was riding high on the back of its investigations into Bill O’Reilly’s wrongdoing at Fox News. Realizing how easy it was for a toxic man to hold power for so long, the Times began exploring similar stories, in the hopes of a story about the pervasiveness of sexual harassment in the workplace. During her preliminary investigations, journalist Jodi Kantor (Zoe Kazan) discovered that allegations against movie mogul Harvey Weinstein went far deeper than anyone could have imagined.

With the investigation becoming more consuming than ever, Kantor reached out to Megan Twohey (Carey Mulligan) a seasoned reporter fresh off of maternity leave and the harassment that followed breaking the Trump Access Hollywood tapes. Together, the two uncovered one of the most widespread examples of criminal wrongdoing in modern American history – and opened the doors for women to tell their stories of harassment and assault freely and openly.

She Said is at its best when it focuses on the work – and more importantly, its ramifications. Journalism stories are so cathartic to watch (I’d say fun, but that really doesn’t feel like the right word) because of their emphasis on the hard work that goes into uncovering a long-hidden truth: the knocking on doors, the smart questions, and above all, the empathy that must be provided to the brutalized victims long kept silent. These are the reasons we respect and idolize these journalists, and watching them unravel a mystery before our very eyes has been an emotional journey for audiences from All The President’s Men to 2015’s surprise Oscar-winner Spotlight.

It takes Schrader quite a while to settle into this groove. Indeed, the first twenty minutes are focused on Twohey’s Trump investigation; which, while setting the scene for both the context of the era (the Trump and O’Reilly stories launched a wave of investigations into sexual misconduct nationwide) and the setbacks they face (victims struggle to come forward due to NDAs, lack of legal funding, death threats, etc.), does eventually overstay its welcome.

However, once the film gets Megan and Jodi into people’s homes, giving them back the voice Harvey had tried to strip from them, it manages to right its overall course. And with both women’s personal stories woven into the film’s tapestry for emphasis and human grounding (Megan is a PPD-suffering new mom, Jodi is often away from her two young kids), the film eventually finds a momentum that’s hard to stop.

Schrader manages to match the narrative’s driving force with her own technical mastery, utilizing a subtle but effective style that matches the film’s back-to-basic themes. Schrader is a master at setting a scene. The film’s opening wordlessly summarizes Harvey’s toxic machine as young Laura Madden (played as an adult by Jennifer Ehle) stumbles upon a movie set and gets sucked into the magic before a hard cut to her running down the street in tattered clothes, weeping uncontrollably.

Even the most simplistic sequences possess a knack for technical mastery. During a conversation with Harvey’s lawyers, as Megan quietly asks questions through which to ensnare the evildoers in their own words, the camera slowly pushes in on Mulligan’s face. She doesn’t say much outside of her questions, but her eyes are ever calculating, waiting for a chink in the armor through which to strike. Accompanied by Nicholas Britell’s quiet, effective score and the little defining details of the newsroom (coffee cups and papers abound, chic-yet-comfortable clothing…it all feels so lived-in), She Said is a master class in how to tell a quiet, straightforward story intelligently and warmly.

However, as terrific as it is on a technical level, it’s hard to shake the feeling that She Said is missing something. That “oomph” factor that takes a film from good to great. There are several little details that may have undercut the film’s momentum. Maybe it overplayed its hand in the Big Moments – during the emotional monologues of the former employees that went on the record, Schrader makes the decision to use voiceover opposite images of disheveled hotel rooms and certain bathrobes. Haunting visuals, sure, but it undercuts the power of the stories.

Or maybe it’s the lack of weirdness or specificity in the story. After all, it’s completely glossed over that most of the contacts Kantor and Twohey found came from a Rolodex provided by – wait for it – Lena Dunham (this detail is revealed in a throwaway line), and it’s never mentioned that the journalists, much like the celebrities they sought to help, were hunted by Weinstein’s private task force of former Mossad agents – agents he’d used to gaslight, threaten, and even attempt to assassinate potential witnesses. Outside of a throwaway line from a random former executive, there’s never a sense of menace to their investigation that was present in real life.

But it is far more likely that the greatest hindrance to She Said’s greatness is the lack of a bond between Megan and Jodi. Don’t get me wrong, these two are great journalists, and the film pays them the respect they deserve. But their relationship between the investigative scenes lacks realness and honesty in its portrayal.

President’s Men works because Woodward and Bernstein interacted like real coworkers. Spotlight worked because the team interacted like real human beings. Whenever Megan and Jodi aren’t investigating, they talk like symbols, not humans, explaining how serious everything is and addressing the Big Themes of the movie.

Every solo interaction feels like the “It’s Time!” monologue form Spotlight – a moment that worked solely because it had been earned through emotional honesty. Without the dialogue being earned, Megan and Jodi never feel like real humans; and if they aren’t real humans, it is hard to connect with them no matter how important the work they’re doing.

However, while Kazan and Mulligan may never feel like a proper team, that doesn’t mean their performances lack nuance. In fact, as individual performers, both actresses are quite strong. Kazan is a gifted naturalist, and is wholly credible as a journalist. Meanwhile, Mulligan has the juicier role as Megan, the more fiery of the two. This means Mulligan gets the big monologues, the angry speeches, the subtlety of a quiet, angry gaze, and a battle with post-partum to boot. It’s a performance that requires careful balance – thankfully, Mulligan is the type of performer that can do so in her sleep.

Amongst the supporting cast, everyone manages their fair share. Andre Braugher is quietly strong as executive editor Dean Baquet, while Patricia Clarkson is unrecognizable perfection as the story’s main editor Rebecca Corbett. Character actor Zach Grenier plays Irwin Reiter, something of the case’s Deep Throat, and while his character only has a handful of scenes, he dominates those scenes appropriately. And Schrader wisely pulls in heavy hitters like Ehle and Samantha Morton when it’s time to give the heart-wrenching monologues regarding Harvey’s behavior.

However, I do want to give special mention to the film’s biggest swing: casting Ashley Judd as herself. Having a real victim in the film is an important, understandable decision. Yet it also comes with a double edged sword: doing so could feel pedantic, or pretentious, making the film feel like Important Homework as opposed to a natural, story – as if to say “Look at us? Aren’t we good for giving her this moment?”

And yet, it never feels self-serving, because when Judd’s pivotal moment arrives, she delivers, crushing the audience with her bravery, her acting ability, and giving the film some of that juice it needed throughout its runtime. It was a calculated gamble that not only paid off, but provided a semblance of justice.

She Said is an important look at a seismic moment in modern history. It’s the story of a great moral reckoning that shook this country to its core. And it checks all the boxes it needs to: great cast, great story, great direction. Goodness in quality and goodness in character were inevitable. It’s just hard to shake the feeling that this film could have been definitive. Instead, it feels supplemental.

She Said is now playing in theaters nationwide