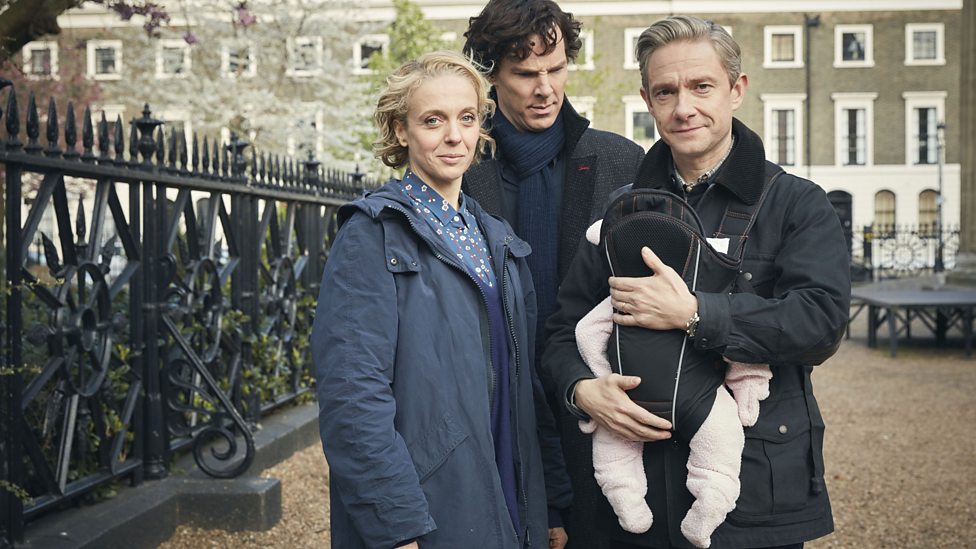 I don’t know if I’ve made this clear on this site, but Sherlock is, in my opinion, one of the greatest shows of the twenty-first century. Finding interesting angles on classic stories in a modern day world, the show features the definitive takes on Sherlock Holmes, John Watson, Mrs. Hudson, and Greg Lestrade. Starting out on a small scale and focused on the mystery and intrigue that made Holmes great, Sherlock has, over the years, become more bombastic and tongue-in-cheek, resembling something of a Bond film in recent years. That’s not necessarily a bad thing, and I’ve still enjoyed it, but it’s moved away from what the show was founded on. However, as we wrap on what many people believe to be the final season, and thanks to some smart writing and fantastic performances, the show has actually managed to rewrite its own history, creating an unexpected character arc and finding the perfect conclusion for characters we’ve come to love.

Season four has focused on watching Sherlock (Benedict Cumberbatch) and John Watson (Martin Freeman) as they try to solve the mystery surrounding Jim Moriarty’s (Andrew Scott) supposed return and the threat of a renewed reign of terror. As tragedy splits the two apart, we begin a study of Sherlock’s past, his own emotional state, and what it would take to make our hero into a good man, a mission set in motion from the first episode of the series.

As any fan of the show knows, this “series” is really just four sets of three episodes (and a one-off Christmas special that is better left unmentioned). Traditionally, the first episode is always the best in terms of direction and storytelling, episode two is a bit of a letdown/filler, and episode three is bombastic and ends on a cliffhanger. This season has flipped that script a little bit. The first episode, “The Six Thatchers,” was overly-bombastic and slightly lacking in terms of story. Meanwhile, episode two, “The Lying Detective” focuses on the intrigue and the mystery, and serves as the best episode of this newest incarnation. And episode three, “The Final Problem,” promises bombast, delivers thrills and mystery, and finally and definitively closes the character growth of Sherlock Holmes.

Choices made in this recent finale are bound to rub people the wrong way. The introduction of a character from Sherlock’s past, while in some ways rooted in the original lore of Arthur Conan Doyle, is a bit of an eccentric stretch, and threatens the show constantly with “jumping the shark.” However, this shadowy villain delivers thrill after thrill, with the writing and the tension always delivering throughout. One particular sequence sent my heart rate through the roof, and it took several minutes for it to return to normal. However, as the episode follows a series of missions and mysteries that test Sherlock’s deduction skills, it is instead his empathy that solves the case. And while it is an odd choice, especially considering the last fifteen minutes of the episode make it near impossible to feel anything but hatred for this villain, it is really the perfect conclusion to the last case we are privy to witness.

As much fun as it is to see the “emotionless” Cumberbatch whip through dialogue in a matter of seconds as he solves case after case, it has been hinted at since season one that Sherlock is more than that. He was always the “emotional” Holmes, we are told, and for some reason he has hidden that. While an unspeakable tragedy in his past left him shut off from the world, it rewrites the entire goal of the series in a rather brilliant way. It’s a funny joke to describe the homoerotic subtext of the “Johnlock” relationship, but this episode concludes that this relationship is really what this show is about. It’s about John helping Sherlock come to terms with his own demons, and to release the emotions he has spent years trying to repress. By allowing Sherlock to finally come to terms with his emotions and his empathy, it allows him to fulfill the promise of becoming a “good man,” and allows us to fully witness the ways that John has changed him throughout the show. It makes for a distinct and mature take on the character, and helps to make Cumberbatch’s extravagant and intelligent take the greatest interpretation of the detective around.

Of course, Cumberbatch’s Holmes is nothing without his Watson, and Martin Freeman does some of his best work yet. He’s always been the master of the reaction shot, looking confused, annoyed, or pleased in the funniest or subtlest ways. And there’s no shortage of that, especially in “The Lying Detective.” However, he really has a chance to shine in “The Six Thatchers” and “The Final Problem.” “The Six Thatchers” allows Freeman to be his charming self, even as Watson makes some less than respectable choices. However, when a devastating tragedy occurs, Freeman gives the best performance of his career. A guttural sob that no human should be able to make leaves his throat as he lashes out at everyone in his immediate vicinity. It’s some of the best acting the show has ever seen, and it’s telling that it comes from the oft-second banana to the “genius.” Meanwhile, in “The Final Problem,” an episode forcing Holmes to abandon any hope of his humanity and salvation, Watson is perennially the voice of reason, releasing the emotions for both of them and playing off Cumberbatch perfectly. When the two of them run into the sunset together, it feels so refreshingly perfect you almost want to cheer.

Season four is also filled with great performances from minor characters to guest stars. The most outstanding by far is British actor Toby Jones, who appears as a rich billionaire with ties to politics who may, in fact, be a murderer. It’s a bizarre episode, but once you move past the more elaborate and over-the-top opening, it becomes a much simpler mystery, anchored by a terrific villain. And speaking of villains, whether you love him or hate him, it’s so wonderful watching Andrew Scott chew through scenery like it’s his job, and it results in his second best scene in the series (nothing will top that original pool sequence. That was television magic). However, if anything, this season belonged to the women. Sherlock has always been criticized for underwriting the female roles, and that wasn’t helped by a morally complicated interpretation of “feminism” in the Christmas special. However, this season, most of the female roles are given a chance to shine, and are given some of their funniest, smartest, or greatest moments. Amanda Abbington proves over the course of the season that Mary Watson has, in fact, always been the smartest of the characters. Una Stubbs elevates the role of Mrs. Hudson to great comedic and empathetic heights, making her a standout in “The Lying Detective.” And newcomer Sian Brooke portrays the villainous Eurus with bone-chilling panache, making her one of a select few to have held her own against Cumberbatch’s Holmes. The only character I wish had been given better treatment is Louise Brealey, who was so warm and so wonderful as Molly Hooper, and I wish the show had given her a better sendoff.

And thus endeth (most likely) one of my favorite shows of all time. It certainly got stranger as the years went on, and I would never argue with anyone who claims that the mystery-based first two seasons are superior to the more grandiose final two seasons. However, due to the creation of a completed arc that no one-myself included-saw coming, and perennially great performances from a wonderful cast, Steven Moffat and Mark Gatiss have put a unique and incredible spin on the Sherlock Holmes mythos. If the fourth season is the way they go out, then so be it. But this is how a show should always go out: shrouded in what made the audience adore it, filled with clever writing, pushing itself to the limits of absurdity, and then leaving the world wanting more.

The Six Thatchers: B

The Lying Detective: A
The Final Problem: B+