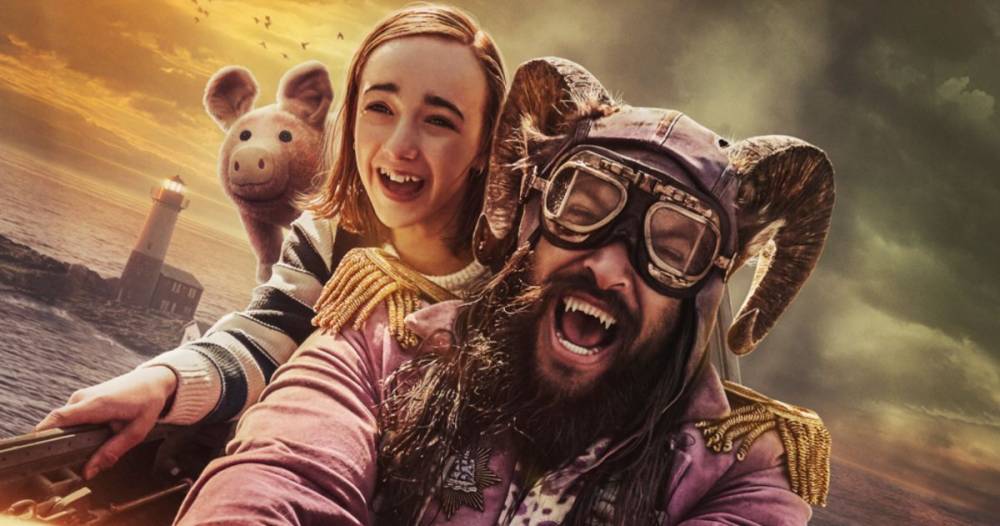 In Tim Burton’s awful 2005 take on Charlie and the Chocolate Factory, Willy Wonka declares “The best prize is a surprise.” Why am I quoting this horrible children’s film to you? Well, it felt apropos given the nature of this review. I knew nothing of Netflix’s newest children’s fantasy Slumberland until about a month ago, when I began seeing its egregiously bad poster everywhere online. I instantly dismissed it, determined to never see the latest in a series of flops from the struggling streamer.

Yet early last week, I received an invite to a critics’ screening, at a theater basically within walking distance from me – a feat that never happens. With no reason to say no, I reluctantly trudged to the theater to see what appeared to be Jason Momoa as a centaur man. Well, reader, I’m here to tell you that Francis Lawrence’s Slumberland overcame all the odds – the bad poster, the lack of marketing, a rough script – to absolutely wreck me. This is one of the year’s best children’s films, and an absolute delight throughout.

Since her childhood, Nemo (Marlow Barkley) has lived alone in a lighthouse run by her father, Peter (Kyle Chandler). Every night before bed, where she has the most fantastical dreams, Peter tells her fanciful stories of his youth as an “outlaw” with his best friend, Flip. One night, Peter goes out to help ships caught in a storm, and he doesn’t return. Now an orphan, Nemo is forced to move to the city with her uncle Phillip (Chris O’Dowd), a pompous, boring man whose only passion in life is his job selling doorknobs.

Miserable without her father, and unable to relate to the kids at school, Nemo’s only escape is her dreams – which comes in handy, as she learns that there is an entire world connected by those who dream, and that skilled adventurers can “hop” from dream to dream. Not only that, but her father was a famous dream hopper, and Flip (Jason Momoa) was his dream partner in crime. Flip’s on a quest to steam a magic pearl from the Sea of Nightmares – a pearl that can grant the finder one wish, even to see a dead relative once more. And so, Nemo and Flip must reluctantly team up to travel from dream to dream, hoping to find the Sea of Nightmares and fulfill their hearts’ deepest desires.

Part of the reason Slumberland works is that it actually feels the wonder its premise promises. Lawrence uses a warm filter that keeps the film feeling dreamlike in nature and nostalgic in tone; and when coupled with the actually impressive visual effects, it makes for a memorable, fantastical experience. There are absolutely delightful character and set designs throughout, including a room of dancing partygoers made of flowers, a giant cityscape with a runaway garbage truck, and a bed with giant legs that traverses the streets of Manhattan.

Lawrence embraces his world’s dream logic, allowing for exciting narrative worldbuilding, like a dream doorway labeled “teeth falling out” that seems tailor-made for my most common nightmare, or a pursuing police force called the Bureau of Subconscious Activities (shortened to BOSA, or, as Flip refers to them, “Dream Pigs”). Meanwhile, the rules are deceptively simple: you fall asleep, you can jump through dreams, but when you wake up, you have to complete the puzzle all over. The world delivers on the wonder, technically and narratively, and because the film fulfills its end of the bargain, audiences become much more willing to go along with the journey.

Of course, it certainly helps that the story treats kids as human beings, as opposed to an infantilized marketplace to be pandered to. Despite an occasionally rough script (the opening scenes are pretty hard to get through), this is a story that eventually envelops you entirely. This is a story about a young girl trying to connect with her lost father, the story of a man trying to reclaim his identity after shutting himself off from the world, and a reflection on the way dreams serve as both an escape and a coping mechanism.

And that’s not all – Netflix allows Lawrence to milk these themes for all their worth. It never tackles these issues with kids’ gloves; the pain of loss and the story’s emotional toll are allowed to go as dark as needed. Hell, even outside the notion of human casualty and a character using dreams, sleep, and potential self-harm to escape the pain of reality, the film is willing to tease the notion of the greatest non-living loss since Wilson the Volleyball (even if they balk at the last minute). It’s the type of film Disney used to master – Cloak and Dagger springs to mind – before the algorithm took over, and I’m delighted it can exist in this day and age.

Of course, a major reason all of this works is because of Jason Momoa’s performance as Flip. For the first two-thirds of the film’s runtime, it’s hard to determine if Momoa is truly amazing in this role or horribly miscast. Eventually, you realize that it’s entirely possible that he’s potentially amazing because he’s miscast. Momoa should not, in theory, play the Beetlejuice role – it’s not his shtick. But he makes it work, because he oozes charisma. He’s transformed the sex appeal that made him a star into normal charm, which allows him to create a character more akin to 80s and 90s cinema than today’s sanitized gobbledygook. It is stellar work that helps carry the film throughout.

The rest of the ensemble never quite matches Momoa’s energy (not necessarily a bad thing, it makes him pop even more), but they all perform their roles admirably. I don’t really love child actors, but Barkley does an admirable job playing Nemo. Weruche Opia is a fun foil as the BOSA agent hunting down Flip. Kyle Chandler is a dependable actor, and at this point a shorthand for paternal kindness, so listening to him kill monologue after monologue as Nemo’s loving dad is delightful.

And then there’s O’Dowd. Chris O’Dowd’s character fascinates me, because so much of his role depends on the narrative, and what gets revealed about him when. His character is so insufferable and unlikable for most of the film’s runtime, stripped of his iconic Irish accent for reasons mostly indiscernible, to the point that the charming actor is an absolute slog to sit through. And yet, by the end of the film’s runtime, all of O’Dowd’s weird choices begin to make sense, and fold beautifully into the film’s tapestry. It only works because of the actor in the role, and I commend him for his work, even if it was frustrating at first.

Slumberland is the kind of delightful children’s film society needs more of. It tackles weighty themes with a sense of whimsy and a childlike wonder. It actually delivers on the strangeness of its world, and creates characters audiences can resonate and empathize with. It actually feels the wonder it promises. I started this movie with an eyeroll and a scoff at the script, and by the end I was fighting back tears. If a children’s film can strike that balance of childlike innocence and crushing adult themes, then it can overcome any and all flaws it may develop along the way.