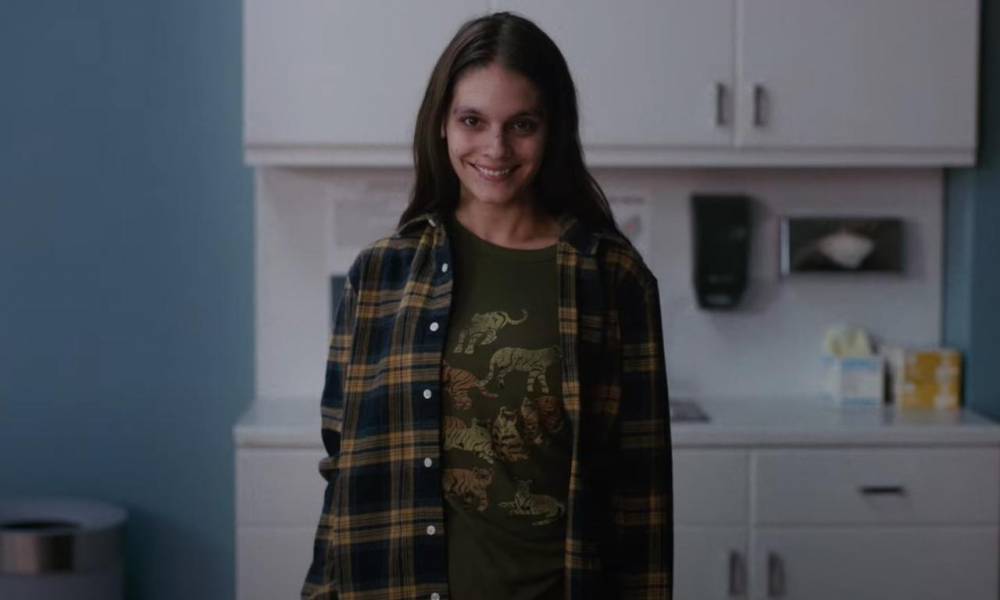 If you’ve gone to the theater at pretty much any point in the last four months (at least since May, when the teaser popped up with Maverick), you’ve likely been exposed to a form of guerilla marketing. A slick ad with the goofiest premise has played almost nonstop in front of every kind of movie imaginable, both laugh-out-loud stupid and kind of terrifying simultaneously.

I’m talking, of course, about Smile, Parker Finn’s freshman outing made on the cheap by Paramount and promoted with a stealth marketing team playing up its creepy mystery. The end result is a lot like those initial ads: creepy, silly, stupid, and just creative enough to dazzle audiences at the start of spooky season.

After surviving a troubled childhood, Dr. Rose Cotter (Sosie Bacon) has dedicated her life to making a difference. She works around the clock at her hospital treating all sorts of behavioral health patients, rarely even taking days off or resting. One day, a terrified patient named Laura Weaver (Caitlin Stasey) is brought into Rose’s care, telling terrifying stories of strange people creepily smiling at her, threatening her and slowly driving her towards the edge – and then she kills herself.

Traumatized by the loss of her patient, Rose is ordered to take some time off in order to cope. And that’s when she begins to see creepy smiling figures, slowly coming closer and closer until she herself ends up like Laura. And so, with the clock running out, and uncertain who she can trust, Rose must try to reverse the curse before she continues the pattern of destruction.

Several directors have proven themselves over the years by following a tried-and-true formula: craft a clever horror film with a catchy prologue, a slow-build first couple acts, and then unleash hell in the finale, all tied together with an irresistible hook. Finn has successfully followed in these footsteps thanks to a premise too dumb to resist, yet too precise to ignore.

After all, as silly as it is to say “the ghost smiles at you,” the general horror here derives from uncanny human interactions and self-mutilation, two concepts the human brain abhors and rejects on sight. Finn manages to keep the concept frightening by implying more than revealing. Sure, we understand the basic rules, and there’s a basic throughline of trauma and mental illness at the core that seems to spark things (similar to the 2016 hit Lights Out, although Smile is far less skeevy in its messaging).

But there’s so much that Finn simply implies, instead of painting out every metaphor in a one-to-one comparison. Take, for instance, the subtle reveal that every potential victim had witnessed someone die before they ever received the curse. It’s never outright explored, or even fully mentioned. It’s just hinted at, leaving room for the audience’s minds to guess at and fret over. And that’s all they need.

Smile also benefits from the way it provides those scares audiences secretly desire. I am a staunch opponent of jump scares in horror films – they are usually lazy and derivative. But as it turns out, what I hate in jump scares is the formula that has developed to ruin modern horror films.

By refusing to play the rules, the scares themselves are far more earned, and much more terrifying. We have no time to prepare ourselves securely behind our fingers! Therefore, no matter how overly long the two-hour runtime may be, or how much the third act borrows from David Lynch’s Inland Empire, we remain firmly onboard with Finn’s direction. We have to; we’re too scared not to be.

Amongst the cast, everyone plays their roles effectively, even if there aren’t really standouts amongst the ensemble. I’m not sure Sosie Bacon is right for this role, but she’s certainly not a hindrance – especially when she throws herself into the sleep-deprived scenes late in the film. Ditto Kyle Gallner as Bacon’s police officer ex-boyfriend. The real scares come from bit-time actors, like Stasey’s Laura, or Jack Sochet’s Carl, a mental patient Rose frequently treats.

It’s also worth mentioning the surprising supporting cast that cycles through in the background, even if only for a scene or two. The Boys’ Jessie T. Usher pops up as Rose’s supportive (to a point) fiancé, Scurbs’ Judy Reyes has a key scene as the wife of a previous victim, Harold and Kumar’s Kal Penn plays the stern-but-caring head of the hospital, and Deadwood’s Robin Weigert has a pivotal role as Rose’s psychiatrist. Oh, and is always the case, Rob Morgan shows up midway through the film to steal the show.

Smile is a simple, yet effective use of what horror can do. It’s not perfect, and I’m not sure it’ll have staying power over time. But it’s not supposed to. It is proof of concept of Parker Finn’s talents, a way to show that he can scare us silly with the simplest and stupidest of means. And the fact he can do it so well is worth the price of admission.