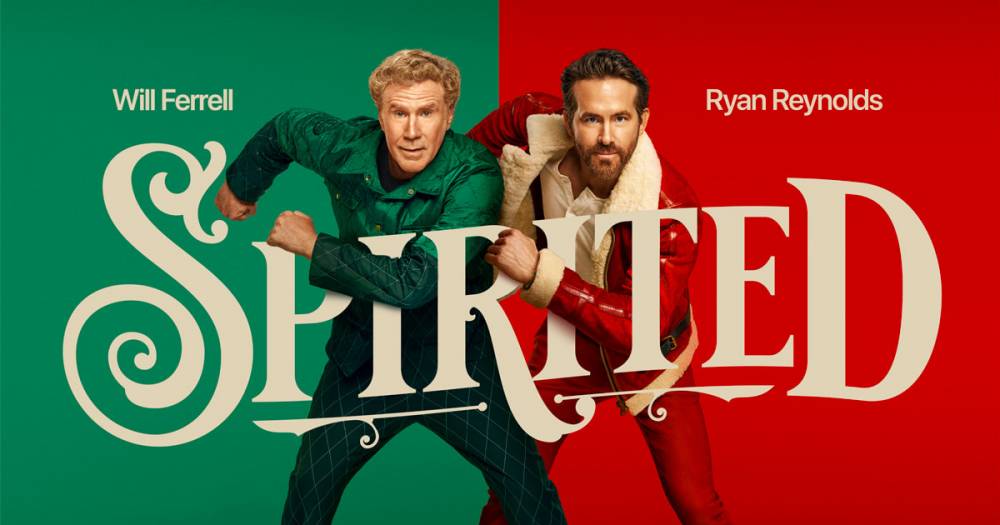 In the world of Spirited, Charles Dickens’ classic tale is more than a story. Ebeneezer Scrooge was simply one in a long line of souls redeemed on Christmas Eve – it’s the entire purpose of the afterlife, an elaborate stage show rehearsed for the entire year to ensure the success of Jacob Marley (Patrick Page) and the Ghosts of Christmas Past (Sunita Mani), Present (Ferrell), and Yet-To-Come (voiced by Tracy Morgan, which is a delight).

Recently, the Ghost of Christmas Present has felt stuck in a rut, as though the people they’re saving make only the smallest ripple in an ever-pessimistic world. That is, until he meets Clint Briggs (Reynolds), a PR consultant who is responsible for, well, most of what’s wrong in the world today. He was one of the first to utilize Twitter as a fear-mongering machine. Despite Clint’s file being listed as “Unredeemable,” Present makes it his mission to redeem Clint on Christmas Eve – a task complicated when he falls for Clint’s put-upon vice president Kimberly (Octavia Spencer).

Spirited’s greatest flaw, right out of the gate, is its story. I don’t mean the script – which is, in fact, rather awful (I would assume the chuckle-worthy lines here are improvisations from a very-game cast). I mean the actual story, which offers nothing new in its variation on Dickens’ classic. Nothing we’re seeing here hasn’t been done before, and better; in fact, Reynolds does an entire bit about how this film is just stolen from The Muppets and Bill Murray. Writer and director Sean Anders (joined on the screenplay by his writing partner John Morris) avoids any sort of reflection or angle on this classic story in order to provide the most pedestrian update imaginable.

The entire film consists of topical references that sound funny or incisive, but barely rise above the level of the 90s pop culture references in Hocus Pocus in their intellect. Reynolds’ New Scrooge is a PR rep who created Twitter outrage and represents the NFL, get it? He uses his looks and charm to distract from his evil, being dubbed “the perfect mixture of Mussolini and Seacrest” (ok, that’s actually a good line). The world is full of Scrooges these days because technology’s making us evil, ya get it? Nothing here that hasn’t been done before, or sharper.

Now, midway through the film, Anders and Morris do begin to explore some interesting premises that surprisingly haven’t been explored in these stories to date, questioning if A Christmas Carol could actually succeed in the long run, as we never see what the change actually looks like past 10 A.M. Christmas Day – not to mention what A Christmas Carol looks like in a world that openly rewards Scrooges.

Yet none of these ideas are ever explored to their fullest – and indeed, they are shunted to the side for the most insane, poor taste-driven third act you will ever witness. It’s like they had an idea for a moving conclusion and chose to double down on its traumatizing nature without ever contemplating how normal human beings would respond to the circumstances. And I’m not going to spoil what this film, completely earnestly, does to its Tiny Tim, but it must be seen to be believed.

It certainly doesn’t help that, as a musical – again, something that should be tailor-made for me – Spirited is rather, well, spiritless. The songs are all completely forgettable at best, and ri-offs at worst. One song, a rip-off of “Ya Got Trouble,” comes close to quality, yet the smarminess of Clint’s plan to utilize Facebook boomers to accost those who buy artificial trees is just asinine. Another overestimates how funny it would be if “Good Afternoon” was a swear word.

And the big showstopper – the one repeated conservatively ten times – is a straight-up rip-off of most modern Broadway showtunes, especially The Prom. Did I mention that these are all designed with the worst sound mixing in existence, so that you can only hear about 50% of the lyrics? Or that they will all be performed by Broadway rejects and eerily smiling child actors preparing for their Disney channel auditions? It’s enough to make you dry heave, or at least go sprinting for a copy of White Christmas.

At the very least, the actors give it their all to make the film presentable. Ferrell and Reynolds are fine enough as the leads, even if they’re only doing lazy versions of their usual shticks. Ferrell outright mimics Elf at one point, while Reynolds tests just how far his sarcasm will allow him to be likable. I was more delighted by the supporting actors, which include the likes of Octavia Spencer playing outside her usual typecast as Ferrell’s romantic counterpart and a put-upon vice president in Reynolds’ organization. She has cute chemistry with Ferrell, and even gets a big solo! As Lucille Bluth would say, good for her.

Meanwhile, amongst the supernatural cast, Broadway legend Patrick Page plays the afterlife’s leader Jacob Marley, which leads to a funny recurring joke for theatre fans where Page hates the fact that everyone’s constantly bursting into song. Rose Byrne makes a cameo as a former saved soul named Karen – yes, that Karen – and it’s as humorous as it sounds. I’ve loved Sunita Mani since her days on GLOW, so I’m pleased to report that she’s best in show here, thanks to terrific timing and the best dialogue. Oh, and whoever cast Tracy Morgan as the Ghost of Christmas Yet to Come deserves a raise. Like I said, the cast brings their A-game. The film just doesn’t live up to it.

It’s hard to say why Spirited hurts so much. Most likely it’s because it just feels like a wasted opportunity. A movie musical should feel effortless, and yet one can feel it trying way too hard each and every scene. Smarmy references to previous Christmas Carol renditions and societal ills can only get you so far. You either have to try harder, or not try at all. Spirited aims at mediocrity, and ultimately leaves audiences wishing that this load of humbug had given up before clearing the door.