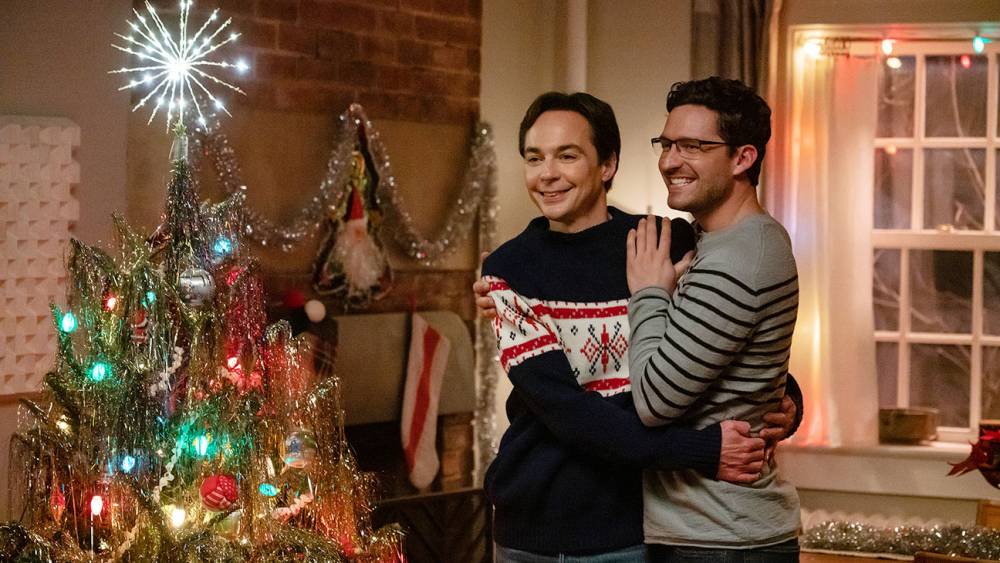 2022 has been a year marked with attempts to finally launch the gay romantic comedy on a mass scale. In many ways, this seems like too little, too late, but with states passing laws stripping away rights and talking heads praising the surging hate crimes against the gay community, it’s hard to dismiss these efforts entirely. So far, we’ve seen the traditional rom-com represented in Fire Island, and the Apatowian raunchy rom-com in Billy Eichner’s Bros. Yet, inexplicably, the best of the bunch is not either of these entries, but the simple weeper Spoiler Alert, smuggled into theaters with little fanfare this coming Friday.

In 2002, nerdy television writer Michael Ausiello (Jim Parsons) met photographer Kit Cowan (Ben Aldridge) at a gay club. On paper, they had nothing in common. Michael was a nerdy orphan obsessed with the television he wrote about, while Kit was a hunky adventurer. Yet they fell deeply in love, and remained together for 14 years. However, in late 2013, they found themselves drifting apart, in a struggle to keep the spark alive. And if that wasn’t bad enough, Kit was diagnosed with neuroendocrine cancer, trapped in a battle for his life. In the face of adversity and mortality, Michael and Kit reignite their spark and remember why they fell in love in the first place.

There’s really no reason a film like this should work. In fact, the subject seemed so unmarketable that the studio changed the memoir’s original name (spoiler alert: the title is Spoiler Alert: The Hero Dies) and created the most unwatchable trailer of all time to mislead audiences. So what made this film click on every conceivable level? Well, a lot of credit is due to Michael Showalter, the former comedian who may be the greatest director-for-hire in the business. Showalter has directed several award-nominated projects in the last few years – The Dropout, The Big Sick, and The Eyes of Tammy Faye among them – yet has never seemed to possess a discernible visual style or brand. However, this never seems to matter, because Showalter understands the one thing that trumps style: emotion.

What Spoiler Alert does better than any other romance film this year – rom-com or otherwise – is build its story around emotion. Everything about this couple feels real. This is a real place, filled with real moments, and built upon real love. So many films get caught up in the set-up – the meet-cute, the inciting action, the loss of love, and the struggle to get it back – that they lose track of what makes every great love story work: the love between the central couple. It’s an art form that’s been waning since its 90s heyday, yet feels fully alive here. Perhaps it’s a bit of a cheat, as Michael and Kit are real-life people living a real-life story. Yet Showalter and his actors manage to make this story feel alive in a way drastically needed for audiences to buy it.

In fact, everything here feels so honest and beautiful, from the performances to the dialogue to the emotions, that it actually forgives some of the film’s missteps (and there are many). The film is littered with cliches and obvious allegories and allusions, like Michael’s obsession with Christmas (not to mention a disturbing Smurf obsession). And there’s a use of voiceover coupled with a framing device involving a dream sitcom world that, while big swings, feel out of place in the film’s narrative. But it’s hard to condemn choices like this, not only because big swings are appreciated in an attempt to be unique, but because Showalter and company will counteract it moments later with a well-staged scene where, despite being separated, Michael is still the only one to notice when Kit is putting on a brave face through pain at a party. It’s moments like these that make this film stand out, far beyond the average rom-com.

Of course, Showalter isn’t alone in making Spoiler Alert such a beautifully rendered feature. He is aided by a series of strong, touching performances – some to surprising effect. Jim Parsons faces an uphill climb as the film’s central force, having painted himself deeply into a corner with his two-decade stint as Sheldon Cooper on The Big Bang Theory. I’m not sure he fully escapes the mold, but he’s believable in the role – and honestly, I’m not sure who else could play a tall, socially-awkward TV nerd. Of course, he has a terrific Ben Aldridge to play off of, who is so deeply invested in this role he will break you ten times over before the film wraps.

Sally Field and Bill Irwin show up as the loving parents of Kit, and both are excellent – especially Field, who will remind you why she’s won two Oscars in her career. Sadie Scott plays a weird roommate who remains in Kit’s social circle long after moving out, and she has a unique talent for line deliveries as a quirky side character. The great Nikki M. James plays the “wild best friend” archetype, and she does so as perfectly as one could imagine. But honestly, the moment and performance that proved that this film was something special was that of an integral minor character so charming and so smart one would be convinced this was a newcomer on the rise, only to realize far too late that it’s Antoni from Queer Eye. Any film that could make the Food Guy into a tear-jerking superstar is masterful in my book.

Spoiler Alert hits all the emotions at just the right time. Showalter and his writers remember that you don’t need any sort of edge, political angle, or flashy gimmick when handling a story like this. By just focusing on the fundamentals – the story, the emotions, the heartfelt realism – the story will gain its edge, make a political statement, and serve as its own flashy gimmick. Spoiler Alert is an excellent example of a dying subgenre, and as one of the year’s biggest surprises, and if you have a heart, you will leave the theater with tears streaming down your face as well.