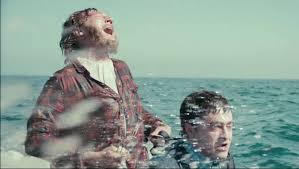 Early on in Swiss Army Man-during the opening credits, in fact-the film forces you to make a choice. As Paul Dano rides the waves on Daniel Radcliffe’s magic corpse like a jet ski powered by farts, you have to decide if you are going to like this movie or not. And if you answer no, I don’t think we can be friends.

Paul Dano (Little Miss Sunshine, There Will Be Blood) plays Hank, a lonely, sad man who has been stranded on a desert island for an unknown period of time. Deeply depressed since even before he was stuck, the first time the audience sees him is with a rope around his neck and soothing himself in song as he prepares to step off a crate. However, he notices a body washed up on the beach. He goes over to check on it, and discovers the man is dead, but is capable of farting with such ferocity that it can transport him off the island. And that’s not all he can do! This stiff-named “Manny” and played by Radcliffe-has all sorts of abilities, including vomiting water and an erection that serves as a compass, all of which he uses to aid Hank in return for lessons on life, which he has sadly forgotten since his death. You can’t make this stuff up, folks.

I’m not going to say anything more about the plot, because a) I don’t want to spoil it, and b) You wouldn’t believe me even if I told you. Written and directed by Daniels (the combined names for Daniel Kwan and Daniel Scheinert), the film is competently handled, perfectly balancing the nuanced emotions and the sheer stupidity of the plot, as if conducting a symphony with one hand while flipping off the audience with the other. I mean, there’s a lesson on the importance of accepting one’s self that is fleshed out through fact that Hank can’t masturbate due to thoughts of his dead mom. Who even thinks of that?

The cinematography on this film is beautiful. A shot of Dano walking onto a makeshift bus is one of the most powerful images I’ve seen all year. However the heart of this movie might be the score, and Andy Hull and Robert McDowell deserve heaps and heaps of credit for what they have accomplished. Instead of settling for a traditional orchestra the way many films would, Swiss Army Man provides a score that would exist in the music-loving Hank’s head during his time stranded. An amalgamation of percussion, birds, music he remembers from the real world (specifically “Cotton Eyed Joe” and the Jurassic Park theme song), and the words and phrases uttered by Hank and Manny, the final result is truly magical to behold.

As for the acting, Radcliffe does what you’d expect from a corpse. He brings heart and wit to a role where he is literally just supposed to lie there and look disgusting. If you are wondering, yes, you do see his bare ass in the movie, but the boner stays firmly inside his trousers at all times. The heart of the picture, obviously, is Dano. Required to do the heavy lifting (quite literally), he performs a range of emotions, while hiding the fears and demons that exist inside his character. Oh, they’re there, and they aren’t hard to find. But Dano never overplays it. He keeps his performance and his choices subtle.

The film reaches its breaking point around the third act, as would be expected. I mean, how long can you maintain a film that’s main conceit is a magic corpse that farts and gets hard? For this reason, it trips at the end. As incredible as the last thirty seconds are, the ten to twenty minutes it takes getting there can become tedious after a while, even starting to venture down some dangerous and borderline terrible roads.

However, it never falters from its main themes of acceptance, living life, and just choosing to be happy outside of society’s norms. And it’s in this theme the film all starts to make sense. If you are going to make a film about rejecting society’s standards in order to be happy, then a story about Daniel Radcliffe’s magic flatulence and stiffys is the only thing that makes sense. In order to encourage others to be different, you have to be different yourself. It’s a call to each of us to accept our inner Radcliffe. Je suis Farting Corpse.