‘The Edge of Seventeen’ Review 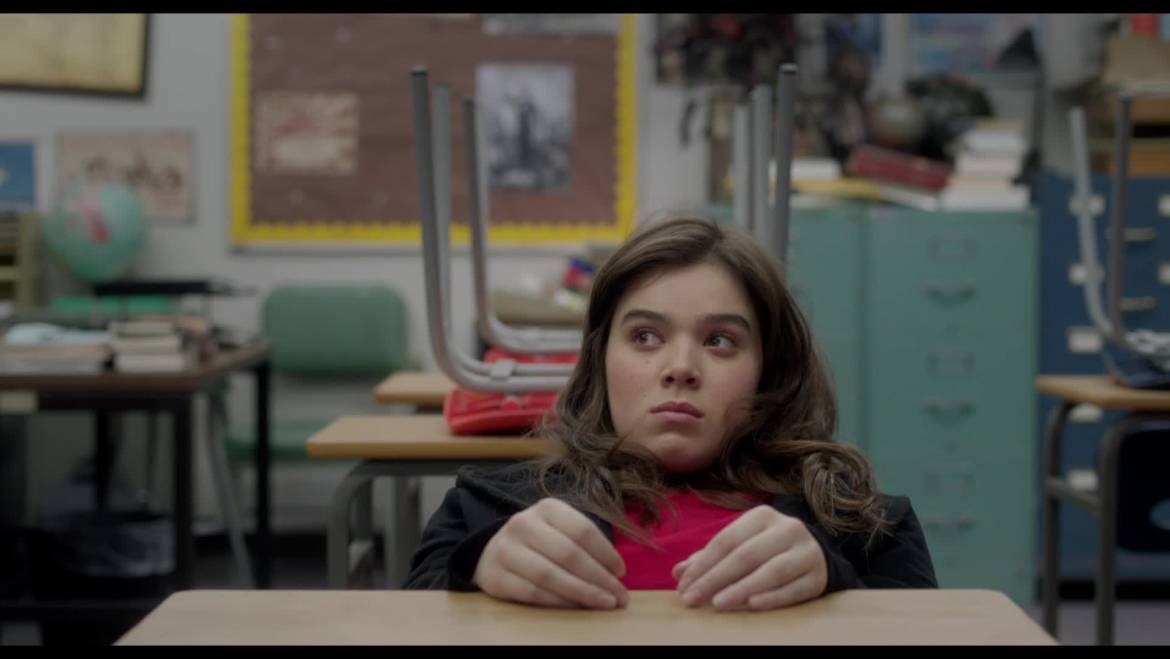 The teen film genre has been in a rut for the past ten years. After reaching its zenith in the eighties with John Hughes, Fast Times at Ridgemont High and The Brat Pack, it seemed to have another renaissance every few years. First came Dazed and Confused, then Clueless, then American Pie and finally Mean Girls. However, after Tina Fey changed the game, it seemed like no one was capable of writing a witty teen comedy anymore. Sure, we had dalliances, like Easy A, or dramadies with a capital Drama, like Perks of Being a Wallflower and Spectacular Now (the first one being the funnier of the two. And the better), but nothing really matched the days where we could laugh at our own awkwardness onscreen. So thank God for Kelly Fremon Craig, who has created the best teen film since Cady Heron danced to “Jingle Bell Rock.”

Nadine (Hailee Steinfeld) has been having a tough time since her father died. Her mother (Kyra Sedgwick)-who never understood her-has become insufferable, her brother Darian (Blake Jenner) is the popular pretty boy, and the only person who really understands her awkwardness is her best friend, Krista (Haley Lu Richardson). However, when Krista starts dating Darian, Nadine finds herself more alone than ever. As she drifts through her days growing bitter and more anxiety-ridden by the minute, she finds solace in the guidance of her reluctant mentor (Woody Harrelson) and an awkward artist (Hayden Szeto).

This movie lives and dies on the talents of Fremon Craig, and luckily she has oodles of it. Her script-as well as her direction-is filled with smart, witty barbs that make this film a winner. Allowing characters like Nadine and her mentor, Mr. Bruner to exchange funny-and at times vicious-one-liners is the basis to constructing any great teen comedy. However, while it’s all well and good to create great sequences of dialogue, it’s nothing if the tone isn’t right. Basically, there are two ways to write a teen comedy: you can set it in a heightened, exaggerated reality, like Mean Girls or American Pie, or you can go for a sense of realism, like John Hughes famously did. It’s much harder to pull off the latter technique, but it’s so much more worthwhile when you do. That is exactly what Craig does here-she finds the realism and the emotion that lies in her story, and she explores it in three important ways.

The first is by crafting true-to-life characters, and inhabiting them with realistic people. Watching Nadine, Darian and the other teenagers up onscreen, I was shocked to find how natural they all felt, even as compared to some of my favorite teen films. While I may love Gretchen Weiners, Spicoli and Ferris Bueller, these aren’t necessarily people I ran into in the hallways back in my day. However, I can name three people off the top of my head that immediately came to mind upon seeing Nadine’s awkwardness, sardonic wit and “I do what I want” wardrobe. The second is by choosing to not make this a stereotypical “clique” story-this isn’t the popular girls vs. the unpopular girls, or the geeks rising up. No, this is something deeper entirely-this is a story about the divide between introverts and extroverts. Nadine is the Queen of the Introverts, struggling with her desire to not interact with other people, both due to a disdain for society and a fear that they will reject her. It’s a fear that everyone has, but people respond to it differently. Where an introvert will seal themselves off from the world, an extrovert will force themselves-and others-to see the bright side and put on a smile. Neither is necessarily wrong, but when you try to force this view on the other side, it creates conflict. This is the heart of Nadine’s relationship with her mother-this isn’t “Ugh, mom doesn’t understand me, she’s so mean.” It’s a girl who can’t understand how her mother gets by with a smile and the mantra “Everyone is just as miserable as you are,” while her mother can’t understand why her daughter won’t just put on a face of makeup to show the world she isn’t broken and to greet each day with earnestness. It makes for a much interesting core than, say, LOL, which touched on mothers and daughters in a similar, yet completely unoriginal (and untalented way).  And the third, arguably most important way this film feels like a breath of fresh air in the genre is the use of swearing. And I mean actual swearing. The way a teenager does in high school, where it no longer fills every sentence (understand, American Pie?), yet still adds an extra zest to everyday lines. It allows the characters to add their own special flair to each and every sentence, spicing things up in a way we haven’t seen in a long time. And for those purists who act shocked, saying “You would never hear these kinds of lines from John Hughes!” remember that he was a man who started at National Lampoon, featured an unnecessary shot of breasts in his first movie to introduce the popular girl, and made several R-rated swearfests, including his beloved Breakfast Club. People usually don’t understand the creativity that can go into a well placed “f*ck,” but when there’s actual thought going into it, a little really does go a long way.

Of course, as important as Craig is to this film, it doesn’t work without the right cast. And everyone in this film perfectly balances “funny” and “real,” led by an everything-you’ve-got performance by Hailee Steinfeld. Steinfeld made her name as an Academy Award-nominated child star in True Grit, giving one of the best performances of 2010 as a twelve year old. She could very easily have gone down the road of another famous Oscar-nominated child star named Haley, but instead she worked on her craft, picked strategic roles, and instead transformed herself into a real talent. She’s been spending her time in indie films and as the straight man in Pitch Perfect 2 recently, but now she’s ready to burst onto the screen with a real fire and a passion, making a name for herself the way Rachel McAdams, Lindsay Lohan, Emma Stone, Alicia Silverstone and the great Molly Ringwald once did. Steinfeld provides an intelligence and an angst to Nadine that makes her one of the most fun characters I’ve seen in a long time. She plays the role as if it’s Janis Ian as a Ringwald-esque outsider. Every time she’s broken down, mocked or has an especially painful insult hurled at her, you witness the pain it causes this poor girl, and begin to feel sorry for her-until she launches into an especially brutal verbal tirade of her own. She doesn’t need your pity-she can take care of herself just fine. Steinfeld also has the benefit of being nineteen and looking like a teenager-it allows her to be absolutely beautiful and yet still understandably awkward, instead of having some 29 year old model explain how “Oh, jeez, I guess I’m not pretty enough, huh fellas?” And I haven’t even mentioned the fact that she gives the most accurate depiction of a drunk teen I’ve ever seen. Look, what I’m saying is I really love this performance, ok?

The rest of the cast does a stellar job too. Sedgwick portrays “on-the-edge” very well, even if her character never gets the resolution I was hoping for. Jenner, honestly, gives a better performance here than in Everybody Wants Some!!, a film I love, and actually gets a solid monologue near the end, saving his character from being too two-dimensional. Richardson doesn’t get nearly as much screen time as you’d expect, but when she’s onscreen with Steinfeld, it’s electric. However, I think that if you’re going to talk about this film’s supporting players, you kind of have to focus on Szeto and Harrelson. Szeto is fascinating because he plays what would amount to the Anthony Michael Hall “Farmer Ted” role in an old Hughes movie, and yet he plays it so much more likable. Sure, he’s not perfect, but his mistakes are just as quickly forgiven by Nadine as they are by the audience. And it’s incredibly nice that they portrayed an Asian character in a teen comedy as the Hall type, instead of giving us another Long Duck Dong (who is great, don’t get me wrong) or John Cho in the Pie series. It’s a piece of the perfect type of casting-they aren’t hiding the fact one of the main characters is Asian, but they aren’t harping on it either. We need more of this in movies. And of course, we have Harrelson. Look, Harrelson is great in anything he does, whether he’s the goofy man (as he is in Cheers) or the straight man (as he is here). Every line is laced with acerbity and humor, and when he matches wits with Steinfeld, it’s electric. However, they didn’t only cast him for his humor, as we learn late in the film when he starts lifting some more emotional weight. It’s a piece of pitch perfect casting, and it goes to show how intelligent the people behind this film are.

The Edge of Seventeen is a breath of fresh air to both a dying genre and the year as a whole. It hearkens back to a simpler time of filmmaking while still feeling new and relevant. It’s got funny lines, cringe worthy-yet-relatable moments, and a helluva lead in Steinfeld. The baton may have been lying there untouched for quite some time after Fey introduced us to the Plastics; however, another incredibly intelligent woman has come along to pick it back up. And should you give it the change, I think it can run the distance.