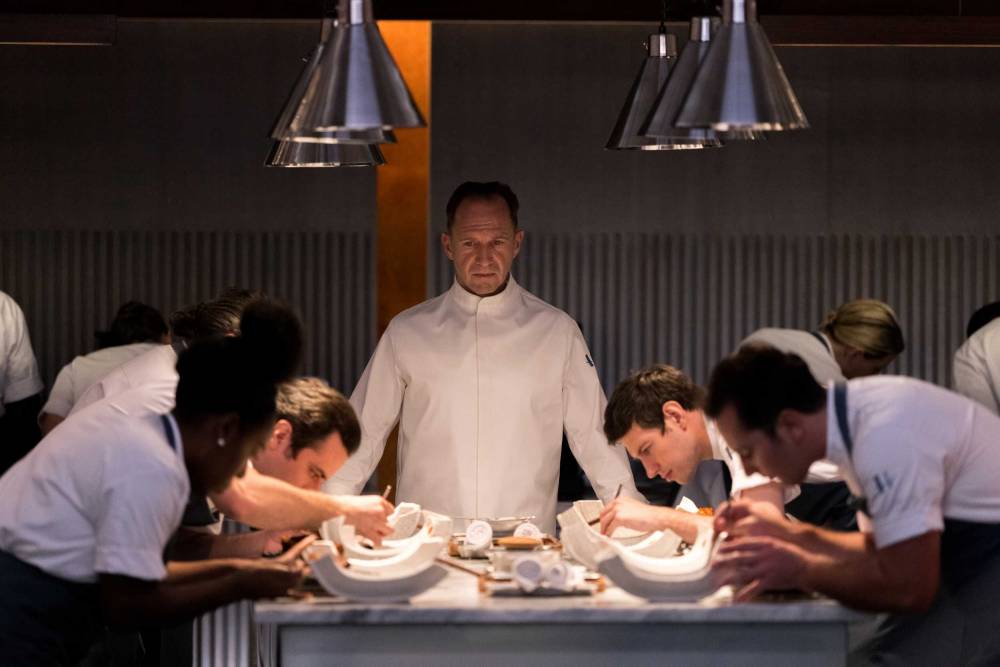 The most egregious crime a piece of art can commit is undermining its own message. If the entire thesis is so flimsy that a film’s very existence disproves it, then why bother watching it? This is the feeling that envelops a watcher of The Menu, the first film from Succession director Mike Mylod, which takes a firm stance about art that, while occasionally witty, mostly just proves an asinine journey towards an obvious conclusion.

Hawthorne Island is the home of the world’s most exclusive restaurant, run by reclusive celebrity chef Julian Slowik (Ralph Fiennes). At $1250 a head, Slowik prepares the world’s finest five-course dinners, with each dinner tied together with a conceptual theme or artistic endeavor. At tonight’s dinner, the guests include finance bros, a famous movie star (John Leguizamo) and his assistant, a politician and his wife (Reed Birney and Judith Light), famous food critic Lillian Bloom (Janet McTeer), and a new couple consisting of foodie Tyler (Nicholas Hoult) and the mysterious Margot (Anya Taylor-Joy).

After a tour of the island by hostess Elsa (Hong Chau), the guests make their way to the dining room to witness Slowik’s military-esque presentation of the dinner service, where each chef on the line responds like soldiers whenever he claps. However, as dinner progresses, and things slowly grow weirder, it becomes clear that this dinner is not like any other. In fact, the disillusioned chef may be dead-set on making this the last meal anyone in the room ever enjoys.

The issues with The Menu are prevalent almost from the jump. Right away, you’re cued that something is off by the dialogue. While a handful of monologues and observations ring true (and we’ll get to those in a minute), the bulk of Seth Reiss and Will Tracy’s screenplay reads as smarmy film school grad dialogue. There is not one line that sounds human; hell, not one line even sounds stylistically human, like a Tarantino or David Mamet script.

Characters speak in dumb cliches and offshoots, lacking any semblance of chemistry between any two humans. It’s most egregious between Taylor-Joy and Hoult, although I’ll provide these two some leeway, as there is at least a narrative reason for their lack of chemistry (no spoilers to be found here). Thankfully, the stilted dialogue is only a hindrance certain times – the sound mixing on the film is so atrocious, the score bleats out almost 50% of what the characters are saying in private conversations.

Yet the simplicity and inanity of the dialogue is far from the film’s greatest blunder. No, its greatest error is in its central metaphor – or, rather, metaphors. The Menu is a bunch of ideas about the modern world all blended together into an unappealing, inedible mess. The film nihilistically explains that Slowik’s great realization is that the world has “givers” and “takers,” and that while we all die, some die more honorably than others. That’s it, that’s the take. Freshman-year philosophy students come up with more interesting motivations than that.

These people are all the worst, yet never in a fun way, like the most simple and obvious comparisons: Parasite and this year’s flawed-but-fun Triangle of Sadness. They are loathsome enough to hate being around, yet aren’t off in fun enough ways to really enjoy. Of course, that may be the point. You see, the class and elitism angle the film has so tantalizingly teased us with in marketing and the initial setup is a ruse, you see. The film’s main argument is that – wait for it – art today is just too fancy.

That’s right, The Menu is a metaphor for how movies are too boring and that, instead of audiences challenging themselves to something new and exciting, artists should debase themselves to the lowest common denominator. Certainly there’s a fun story possible in a chef/artist who used to make fun junk, became too famous for his own good, and just wants to go back and have fun again. Yet the way The Menu presents its story, it may as well be saying “F*ck beauty in cinema, I only want superhero movies, and if you don’t agree, you’re a snob!” Which is a bold statement coming from the most overly wrought, overly directed film to release in 2022.

Of course, to be fair to the film’s entertainment value, there are aspects to appreciate here. For example, Mylod – the most popular Succession director – is a gifted visualist. The film looks gorgeous and feels esoterically bizarre, even as the film’s final act reveals him to struggle with action setpieces. The meals  – arguably the most important detail of a food-based film – look impeccable, which adds to the humor when the pompous guests either overwhelmingly fawn or apathetically refuse to acknowledge the food’s attention to detail.

And when the film stops trying to be funny and lets humor happen naturally, it works. There’s the silly aesthetic of the violence. There’s Tyler’s refusal to stop eating even as people start dying. Lillian Bloom gives the most loquacious reviews of the food, a spot-on satire of pompous critics. And the year’s funniest monologue arrives when Slowik explains to Leguizamo’s actor why he’s been slated for death. I won’t spoil it, but it’s genius. There is quality on display here – the film just needed more of it.

Amongst the ensemble, only a select handful manage to stand out – although the script only allows that handful to stand out, so it’s hardly the actors’ fault. Hoult is always terrific when he plays a pompous prick, and his Tyler is no exception – his analogy to film bros may be the only cross-medium allegory to work. Fiennes, meanwhile, has always been a terrific tyrant, and his Slowik is no exception. His monologues are always a blast – it’s hard to deny there should be more of them. Similarly, Janet McTeer is a delight as an obnoxious food critic, and every line she utters is golden. And then there’s the film’s real star, Hong Chau, who dominates as a mysterious hostess. Every line is filled with acerbic disdain hidden behind the veneer of kindness; she is the ultimate hospitality worker.

As for Taylor-Joy, she’s fine as Margot; she does her best with an underwritten part. John Leguizamo is equally fine; his role is the broadest, and therefore has the most leeway, but he never strays too far from traditional in his presentation. Otherwise, the only performers worth noting are Birney and Light, who play a rich older couple who barely speak to each other and never appreciate the fancy meals they’re eating. Neither breaks the mold in their portrayals, but they play roles like this for a reason, and seeing them do what they do best is hard to hate.

The Menu is a cornucopia of wasted opportunity. Any one thread of commentary could have saved the film, but it tries too much to have it all. And because of its conflicting, competing ideas, anything interesting it has to say is devoured by its own hubris. The cast is commendable for bringing their all to this material, and it’s hard not to respect certain ideas and visuals laid forth. But when you’ve seen this story told, in several different ways, far better and far less pedantically, all one can do is emerge from the theater with a foul taste in your mouth.

The Menu is now playing exclusively in theaters