‘The Mitchells Vs. The Machines’ Review

HomeReviews‘The Mitchells Vs. The Machines’... 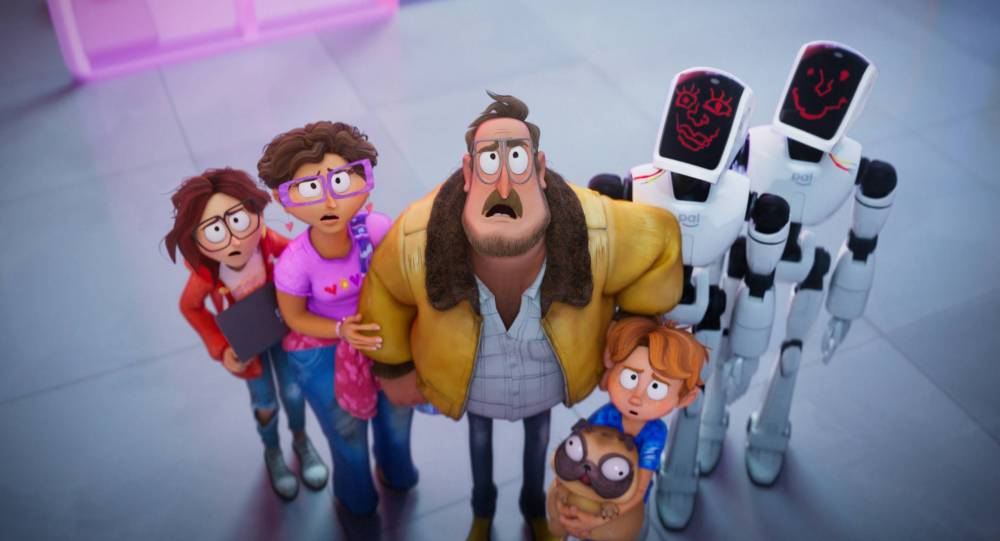 Animation is a genre is supposed to find new ways to expand the imagination. It’s meant to take us to places the human mind cannot go, and to utilize visual metaphors to explore human emotion. Right now, the best place to witness these groundbreaking changes is television, which is experiencing a golden age boom thanks to shows like Adventure Time, Steven Universe, and Gravity Falls. But thanks to Falls creative designer Mike Rianda, there is now a new entry in the Great Animated Movie Canon, and its name is The Mitchells vs. The Machines. It is an animated movie with heart, humor, and strangely seems directly made for me.

Katie Mitchell (Abbi Jacobson) is an ordinary teenage girl from Michigan. She has a pleasant relationship with her family, including her kindly mother Linda (Maya Rudolph), dinosaur-obsessed brother Aaron (Rianda), and dog Monchi, but she has a strained relationship with her father Rick (Danny McBride), who doesn’t understand technology, and therefore doesn’t understand her obsession with filmmaking. When Katie gets accepted to film school in California, and Rick realizes she may leave and never come back, he decides to take the family on one last road trip in order to save the relationship. However, family squabbles are soon to be the least of their worries, when an evil AI named PAL (Olivia Colman) unleashes a robot apocalypse, hoping to capture humanity and launch them into space. And so, armed with a beat-up station wagon, a flash drive armed with a KILL Code, and two kindly defective robots named Eric (Beck Bennett) and Deborahbot 5000 (Fred Armisen), the family must remember how to work together and love each other in order to save the world.

What I particularly love about The Mitchells is that it’s such a unique, original story, and yet it feels completely universal. Perhaps I’m saying that as an odd-duck film student from Michigan who loves almost every comedian working in this film. But it goes beyond that. The Mitchells is a parable, taking the ordinary and making it extraordinary. Each bit of action, each bit of comedy, and every turn of the story is meant to tie into the central concept of this oddball family coming together and understanding each other. Every character’s journey is so simple, yet treated with heartfelt honesty. There’s the dad who’s afraid of losing the daughter he doesn’t understand. There’s the daughter who wants to feel supported by the people she loves. There’s the son who doesn’t want to be forgotten. And there’s the mom who wants the world to view them as a “perfect” family. Even the silly plot is itself a metaphor. When families separate for the first time when the eldest goes off to college, it can feel like the end of the world. Ergo, it would make sense that this story about a daughter leaving for college should play out opposite a robot apocalypse. This is a film with heart, like its brethren films Spider-Man: Into The Spider-Verse and The Lego Movie, and that heart makes it all the more charming than your average animated family film.

Of course, that heart is easily buoyed by the one-two punch of sharp comedy and stunning animation. The work here by Rianda and his animaters is simply sublime. Rianda smartly mimics the film’s aesthetic to reflect Katie’s own amateur filmmaking tendencies. There are pauses and asides and silly doodles that appear alongside the energetic CG animation, giving the film both a kinetic energy and a whimsical, childlike warmth. The battle sequences in particular are exciting and dazzling, possessing an energy that would capture the attention of any child viewer. However, as impressive as the animation is, it’s the writing that won me over. The screenplay by Rianda and Jeff Rowe possesses the sort of witty humor that has emerged in serial animation in recent years, and it works just as well in the cinematic medium. Mitchells earns several belly laughs during its runtime, whether it’s through two SNL greats playing robots who learn empathy, zany Looney Tunes-style humor and satire, or the sheer joy of killer Furbies (I cannot overstate the brilliance of killer Furbies, presented in a visual allusion to Hitchcock’s The Birds). The film’s humor is aided by the endless material that can be mined from the premise of society’s addiction to technology and the toll that addiction takes on families. Children’s entertainment has always been a terrific medium for delivering hard truths in funny, simple ways – here, we get the tragic, earnest lament “Who would have guessed that tech companies don’t have our best interest at heart?” This is a film that dabbles in the absurd and backs it up with worthy animation.

In terms of the voice acting, everyone is up for their roles, which results in performances that range from “That’s what I expected” to “God, that’s brilliant casting.” For example, it’s not too much of a stretch of the imagination to see Jacobson as an awkward teenager, or McBride as a fussy, screaming outdoorsman. Both performers bring pathos and heart to their work, but it’s nothing surprising. Ditto Maya Rudolph, who is making bank by playing the mom in every animated film (see also: Luca and Big Mouth) and crushing it every time (this may be my favorite mom performance by the beloved actress). And I don’t have much to say about Rianda’s work as youngest son Aaron, other than he has a fabulous shriek. No, the real joy in the voice work here is the caliber of talent the filmmakers collected to play the supporting roles – many of which involve in-jokes based on their personality. Oh, sure, Beck Bennett and Fred Armisen as two overly-earnest and defective robots might not be too much of a stretch. And Olivia Colman as an evil Siri is bizarre, but brilliant casting. But my favorite three performances aren’t the actors delivering the jokes – it’s the actors who are the jokes. I mean, what director in their right mind would think to cast Eric André of all people as a Steve Jobs/Mark Zuckerberg-esque tech bro? Which casting director brought in real-life couple John Legend and Chrissy Teigen to play an obnoxious Instagram-obsessed married couple? And who convinced Blake Griffin to come in to voice killer robots whose voices would be so distorted by computer technology that he’s not even recognizable? Look, if your film is so sharp in its comedy that it even casts actors as a bit, I’m all for it.

The Mitchells vs. The Machines is a delightful animated romp. Perhaps my favorite animated film since Spider-Verse back in 2018. Its animation is sublime, the jokes pack a heavy punch, and above all, it’s got a great deal of heart. I adored every minute of it, from the top down. And while I’ve already mentioned that it already seemed built for me – about a family from Michigan taking their eldest to film school while doubling as a condemnation for technology addiction – I don’t think that matters in the long run. The universality and joy in this film surpasses any superficial connection I may possess. Anyone can love this film, and I think everyone will.

The Mitchells vs. The Machines is now streaming on Netflix