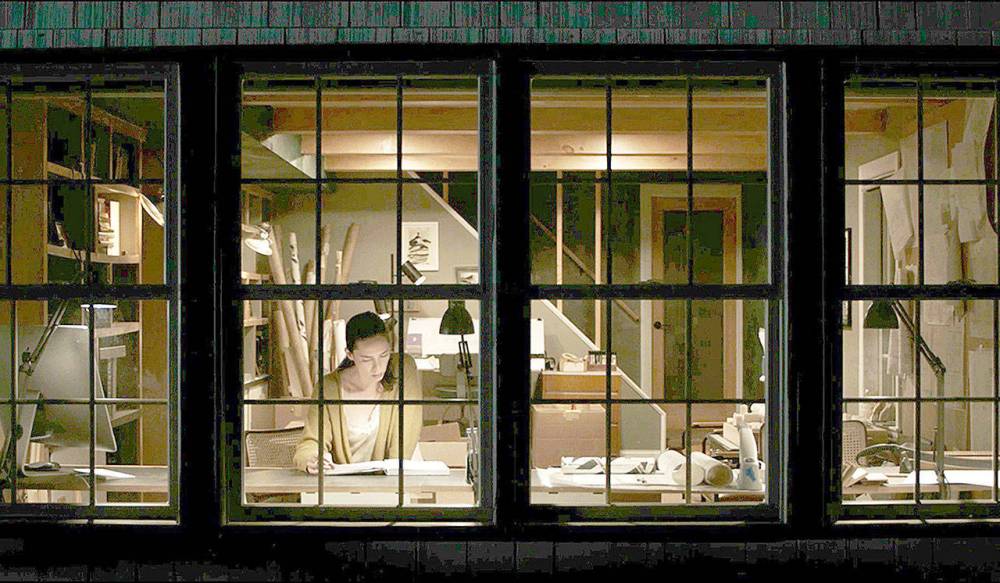 Horror based on depression has become a dime a dozen in recent years. While it’s always been a recurring theme in the genre (horror is designed to help us cathartically release the terrors we can’t explain), it seems that in recent years these themes have increased exponentially, from the arthouse of The Babadook to the mainstream efforts like Lights Out. In The Night House, director David Bruckner offers up his own exploration into things that go bump in the night. Its scares and themes never wholly work together, and the film is far from perfect. But it’s hard to deny the level of care that went into the execution, or the level of craftsmanship on display in Rebecca Hall’s central performance.

A few days ago, Beth’s (Rebecca Hall) husband Owen (Evan Jonigkeit) killed himself with seemingly no warning. All he left behind was a cryptic, nihilistic note. Devastated by the loss and her own depression, and reeling from the revelation she may not have known her husband, Beth takes to drink herself to sleep every night in the lake house they owned. However, immediately following Owen’s death, things start to go bump in the night. Doors mysteriously swing open. Voices whisper to her in the night. And mysterious lights shine from across the lake, from a location that should not, in theory, have a house there. And so Beth begins to investigate, and soon discovers horrifying secrets about her husband, her home, and a terrible tragedy from her past.

There are two major forces at play in The Night House, each technically efficient, but never wholly interconnecting. The first is the screenplay, and its exploration of depression. Written by Ben Collins and Luke Piotrowski, The Night House helps us feel the drama and looming dread from the jump. When we first see Beth’s house post-suicide, it feels empty. While most horror films would use this vast space to fill us with terror and discomfort (The Invisible Man did this quite well last year), here these images just make us feel sad. It puts us in the same headspace as Beth, and therefore we share in her mental dissolution as the film goes on. These images and themes recur again and again, as Beth unravels further as she tries to connect with the husband who left her far too soon.

The tension here is, therefore, not borne out of what might happen, but living in the wake of what has happened. In a way, the film smartly uses that depression as a jumping off point, instead focusing on the realities and fears of grief and death, of both losing someone and realizing that you never really knew the person that you lost. The reveals here, and ultimate payoff, are therefore altogether terrifying, sad, and emotionally real, based on the journey the characters take together.

Equally impressive is Bruckner’s ability to craft a tense, riveting horror set piece. The surest way to kill a horror movie dead is to draw attention to the “scary parts.” It’s why the later Friday the 13th movies were so laughable – they always hinged on Jason jumping out and yelling “Booga Booga Booga!” Bruckner lets his film breathe, setting up the scariest moments with small, subtle touches that build to a satisfying climax. Subtle, creepy-ass wall shadows abound in the house, forcing the viewer to search the frame for a clue or a thrill.

Anxiety builds through seemingly little touches that grow progressively worse and worse – strange noises, phantom footprints, creepy calls from beyond the grave, a recurring leitmotif of “The Calvary Cross” from a turned-off record player (surely she would have changed the record after the first few times, no?), and, ultimately, visions of girls leaping to their deaths from a high cliff. These little moments build and build until a cathartic release isn’t just expected – it’s mandatory. And boy, is that catharsis needed; in the first major set piece of the film, Beth goes down to the dock where she’s heard a noise. And the build-up on that dock is the most terrified I have been by a horror film in a long time. Maybe since It Follows, or the first Conjuring. There is no question that Bruckner knows what he is doing in this department.

My issues with the film, however, arise in the connection of these two halves. The screenwriters have crafted a creepy little ghost story about grief and depression, Bruckner has crafted a terrifying little ghost story, but somehow – and I’m struggling to figure out exactly why this is – the two versions of this story just don’t work in harmony. They run concurrently – one side exploring the terrifying reality of grief, the other crafting a Wiseian horror film on a low-budget scale. If I had to guess as to where this disconnect comes from, it’s the fact that Bruckner seems more interested in visuals than in the actual plot, which can work for some directors (David Lynch, for example), but can also grow tiring if not executed perfectly. Bruckner has all these fabulous ideas for horror imagery – Beth becoming her own ghost for a period of time, mirror houses that ultimately feel and seem irrelevant and so on.

However, none of these images serve to further the plot. If the film were a fever dream, like Climax or Mulholland Drive, these excursions would be understandable. But because so much of the film hinges on Beth and her emotional journey, it ultimately feels unnecessary, and bogs down the plot. It also doesn’t help that the film is a little too long. The Night House feels every minute of its two-hour runtime, and the longer the film goes on, the more opportunities you have to reflect on the faulty logic and unnecessary asides. It’s a shame: they are two really good halves that you just wish were one terrific whole.

Thankfully, even as the film goes on for too long, you at least have Rebecca Hall’s commanding central performance to keep you invested. For all the praise Toni Collette received for 2018’s Hereditary, Hall deserves just as much – maybe even a little more. This is a raw, arresting performance from the jump, emotionally rich, constantly on edge, and teetering on the brink of oblivion. Hall’s Beth has a gamut of emotions to run – depressed, drunk, annoyed, curious, angry, and terrified, and she gives her all to each and every moment. Even when I was growing tired with the film and waiting for it to wrap up, I couldn’t take my eyes off of Hall and what she was doing – with her face, with her hands, with her body, and with her eyes.

There are other performers in this film, all of whom are adequate or better. Sarah Goldberg from Barry pops up as the BFF, and she is effective in the role. Vondie Curtis-Hall has a crucial role as a neighbor, but I never really believed the character, despite his efforts as a performer (I blame the script on this front). Jonigkeit is, understandably, relegated to flashbacks and the occasional ghostly appearance, but he does his job well enough. Honestly, the only actor I would want to single out outside of Hall is rising star Stacy Martin, who plays a key role in Owen’s private life and holds some essential secrets to the mystery. She only has two scenes, but they are integral moments acted well. This should come as no surprise, however – Martin has been turning in great work for years now, and hopefully she can get that big break soon.

The Night House is a good film that could have been great. This is no mortal sin – there are so many films that are simply “good,” and thousands more that wish they could earn that title. And so I recommend the film on a case-by-case basis. The average movie goer’s checklist would simply ask, “Is the story good? Are there scary moments? Is it well acted?” And based on that criteria, The Night House passes with flying colors. It is only when diving into the minutia that I begin to pick it apart. I wish I was invested; I suppose I can settle for simply being entertained.

The Night House is currently playing in theaters, and will be available to stream in the near future