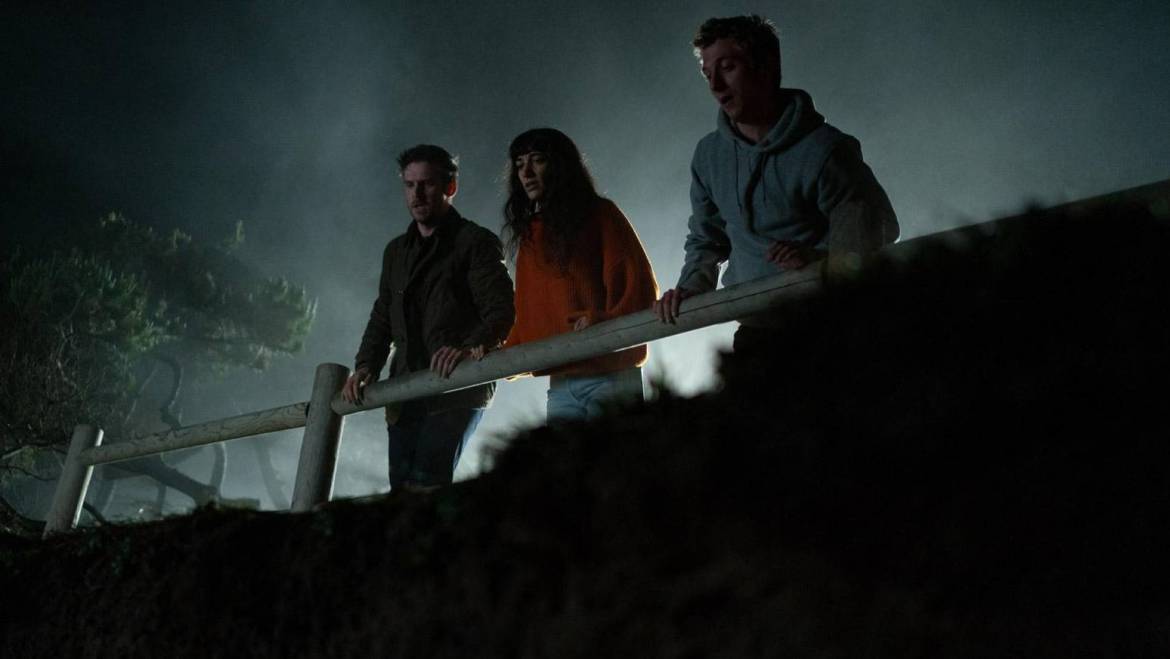 Many years ago, when I was working on spec scripts for my portfolio, I struggled tirelessly on this one nugget of an idea I couldn’t quite crack. The idea was to make a traditional Sundance indie film, with arguing characters and long-buried personal secrets bubbling to the surface, only for the final act to reveal a horror twist where the characters are shockingly and brutally murdered. I worked on that screenplay for months before giving up – the tone was an utter mess, and no matter how hard I tried, I couldn’t balance out the thematic shift and the characters’ reactions. I always figured the failure was a sign that I was no Great Writer – that whatever talent I did have wasn’t the right type of talent for this project. Thankfully, after watching Dave Franco’s directorial debut The Rental, I realize the problem isn’t with me, it’s with the idea itself – that the idea just doesn’t mesh as well as it does on paper. The Rental is a film that proves Franco’s filmmaking talents whenever it chooses to be a horror film, but lags whenever it shifts back to indie drama.

After a windfall for their company, business partners Charlie (Dan Stevens) and Mina (Sheila Vand) plan a weekend getaway at a gorgeous Airbnb. Along with Charlie’s wife Michelle (Alison Brie) and Mina’s boyfriend (and Charlie’s brother) Josh (Jeremy Allen White), the quartet settles in to a house by the sea for a weekend of dancing, hiking, drinking, and the occasional illicit drug. But the merry weekend soon takes a turn as old feuds and new turns begin to rear their heads. Michelle’s jealousy and stick-in-the-mudness puts her at odds with the group. Josh’s anger issues rears its ugly head. Charlie and Mina’s unspoken attraction threatens to manifest itself physically. And if all that wasn’t enough, there’s a deranged murderer skulking around the premises.

In theory, The Rental should be right up my alley. After all, I love horror films that begin with misdirects. Psycho, Halloween, You’re Next, Blair Witch Project… The Rental, which starts out with the promise of four friends at an Airbnb that get comes undone when faced with a serial killer, could have been a slam dunk. And when the film takes that turn into horror, it is pretty effective! Unfortunately, the drama that precedes the masked slasher is not strong or interesting enough to justify the eventual twist. It’s pretty clear from the jump that Joe Swanberg had a hand in writing this screenplay – easily the least successful mumblecore artist, Swanberg’s lack of understanding of human interaction permeates the screen with each plot development. Compare The Rental to its similarly-structured cousin You’re Next, another mumblecore slasher. In You’re Next the drama served as a form of character development, and set the stakes for the nightmare to come, all while disguising the product as a dysfunctional family story in a tongue-in cheek way. Here, the drama is the point, and the faux-indie bullsh*t forces the film to fall flat time and time again.

The dialogue is almost entirely exposition, uttered solely to fill in background on Josh or Charlie or whichever character needs a history lesson now. Plot developments are either painfully obvious, like Charlie and Mina having an affair (it’s supposed to build to this decision, but is so phoned in I thought they were sleeping together within the first five minutes), or completely unnecessary, like the racist homeowner who has no relevance to the plot as a whole despite being the topic of conversation for almost a quarter of the film’s runtime. Oh, and in case you’re wondering if Swanberg has improved writing female characters, you’ll be happy to know that Alison Brie’s Michelle devolves from a fairly normal housewife to a b*tchy shrew halfway through the film. This screenplay is wildly uneven from beginning to end, and any chance of salvaging a worthwhile film from this project is sabotaged at every turn by its reliance on these lines, these twists, and this story.

It’s a bit of a shame the script is so bad, because Franco as a director is actually not too terrible. In fact, oftentimes, he’s quite good. If nothing else, Franco knows how to work a camera, capturing creepy images quite expertly, whether it’s a mysterious door or a masked man creepily looking through a window. The use of light and color is often inspiring, from black to blue to green. I’m also impressed with Franco’s ability to stage tension – there’s a terrific moment where a character is being stalked that appears disorienting to the viewer before becoming clear as crystal, and when the narrative finally leans fully into horror, it is genuinely terrifying. I can’t get an image of a man running through fog towards the camera out of my mind. Even the comedic relief is expertly timed, like a terrific shot of a stoned Dan Stevens dancing with a dog. Ultimately, the film is a textbook example of good direction in service of a terrible script.

Of course, although this is an admirable first attempt as a director, I do have my reservations about Franco’s abilities. While he is mostly an efficient director, it is quite evident on several occasions that he’s just stealing from older, better filmmakers. The setup (and multiple shower scenes) are drawn directly from Alfred Hitchcock. The slasher is often shown through shadow and heard panting in the night – a trick stolen directly from Michael Myers in John Carpenter’s Halloween. And when the film takes its turn into the slasher genre, even the score slowly plagiarizes Friday the 13th. And when he’s not stealing, he’s throwing in “artistic” choices that make no sense. There’s a sex scene that’s blurred out for…reasons – I’m all for tastefulness, but the choice makes no sense with the rest of the material and just looks sloppy. Just cut to the next day or bite the bullet and show something. Compromises kill art. And there are several sequences meant to convey a feeling of being watched shot from insane angles, like the ceiling vent. It may seem scary on the surface, but really just reveals Franco as a lazy filmmaker. It’s a valiant outing as a whole, just flawed.

In terms of the performances, everyone mostly meets a general level of quality. Probably the best performance comes from the lesser-known Vand, who is solid as Mena, the only smart member of the group. If the film were to have a “Final Girl,” per se, you’re hoping it’s going to be her. Meanwhile, Stevens continues a recent trend of lovable smart-idiot scoundrels with Charlie, and he kind of carries the film in its weakest areas. Alison Brie’s character devolves into two-dimensional shrew territory as the film goes on, but as per usual, you’re willing to give the character more mileage because she has that star quality. Hell, I even liked Toby Huss as Taylor, the ridiculously sinister and racist rental owner, even though he is a clear misdirect. The only performance I didn’t care for is Allen White as Josh. Josh never feels like a real character from the jump, built from clichés and clunky lines. White plays the role as a stereotypical mumblecore douchebag, and it not only clashes with the other performers’ acting styles – it actively hurts the movie.

The Rental is a frustrating film. I am incredibly impressed by what Franco accomplishes as a director – he may even surpass his brother’s skills behind the camera. And the cast really sells the horror of it all when the film eventually shifts in that direction. But that’s the problem – it takes forever to build to that interesting plot, forcing us to wade through boring “twist” after boring “twist,” until we finally reach something that matters. And even then, the high doesn’t last too long – the ultimate conclusion is ridiculously anticlimactic. The Rental is an excellent example of proof of concept: proof that Franco is a capable director, and proof that the Psycho model of horror is the exception that proves the rule.

The Rental is now available to rent or purchase on Amazon, iTunes, and other media services