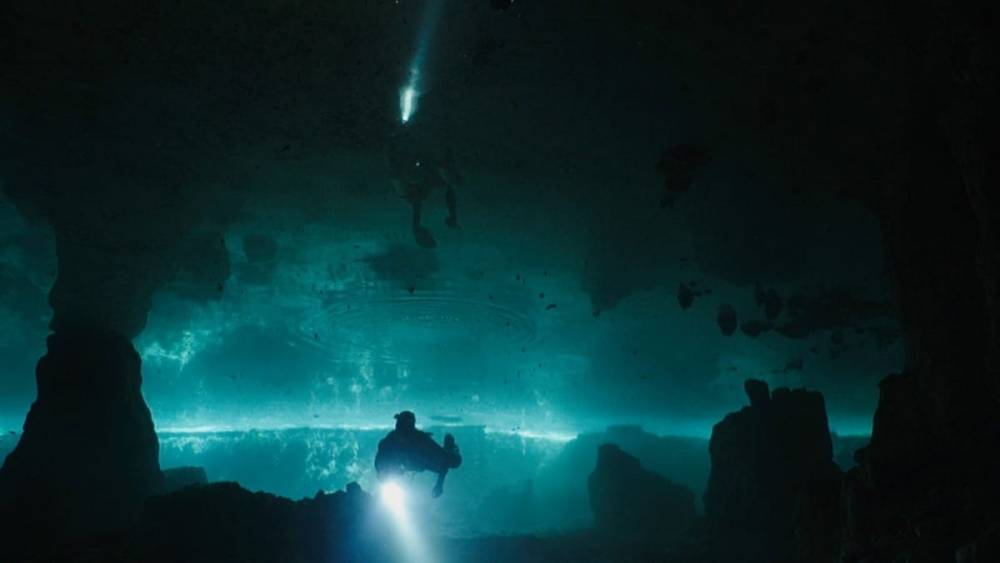 I wasn’t the world’s biggest fan of Free Solo, the Oscar-winning previous film by Jimmy Chin and Elizabeth Chai Vasarhelyi. While it was undeniably a fantastical feat of filmmaking and physical performance, my biggest takeaway was “Wow, Alex Honnold seems like a d*ck.” There didn’t seem to be much exploration into the way he treated his girlfriend or the people in his life other than “It takes a douchebag to accomplish something great, and also he might have Asperger’s.” No matter how hard I tried I couldn’t emotionally resonate with Honnold as a human, therefore undercutting the impressiveness of his endeavors. I mention all this so you understand why The Rescue, the newest documentary by the married filmmakers, resonated with me so deeply. Not only does it expertly portray the sheer terror involved in cave diving as a hobby (and the insanity that goes into it), but it also crafts an emotional story that both demonstrates the triumph of the human spirit and the spiritual journey its protagonists undergo.

As many readers may remember, in 2018, the members of a local soccer team – 12 boys and one coach – went on a hike into a local cave in Tham Luang, Thailand. When a monsoon suddenly hit, the team found themselves suddenly trapped. With the Thai military and rescue forces unaware of how many boys were in the perpetually flooding, miles-long cave – let alone if they are even still alive – the Thai Navy SEALs reluctantly turned to the international community of cave divers to lead the exploratory team. The team included such names as Rick Stanton, John Volanthen, and Vern Unsworth, amongst others. With both groups known for their inability to work with others, yet all possessing an overwhelming sense of duty and “generosity,” as the locals repeatedly say, the groups must find a way to cooperate and work together against a ticking clock to see how many – if any – of the boys they’d be able to recognize before lack of food, oxygen, and a flooding cave system made rescue impossible.

On a cinematic level, The Rescue works for much of the same reason Free Soloworks: visual proof of humans doing extraordinary things. Chin and Vasarhelyi have a gift for capturing extreme sports in all their glory. In Free Solo, that meant putting cameras alongside the cliff to see a human being inexplicably climbing an unclimbable rocky ledge. Here, they utilize both stock footage and recreations to put the viewer straight into the action. The camera follows the divers as they go under, over, and through caves that should not be traversable. The further they go, the more we feel the lack of oxygen, and as we learn of divers like Saman Kunan, we fully understand just how dangerous this passion is. The Rescue helps us feel the insanity of the hobby, sets the stakes for the endeavor, and puts us firsthand into the harrowing ordeal.

But the filmmaking also marks a striking improvement beyond just the filming of extraordinary feats of athleticism. It also extends into the film’s ability to tell a story. Whereas Free Solo lacked an overall arc – the film mostly consisted of Honnold discussing “I think I can” before the final act’s “I can” – The Rescue manages to craft a narrative out of real-life events. Most of the credit for this goes to editor Bob Eisenhardt, who took real life facts and moments and used them to set stages, increase tension, and introduce obstacles. In fact, it turns real life into a narrative arc, even if you did watch every minute of the harrowing events in real time. The first few minutes recap the disaster for audiences, with ample attention focused on the scared parents. As opposed to Free Solo’s rather isolated, egotistical reality, these opening minutes both set emotional, human stakes, while simultaneously establishing a ticking clock, to add to the tension.

The film then goes on to use every twist in the story not only as a recreation of reality, but as a way to continue the story’s tension. For example, early on in the film, the divers find a completely different group stranded in the cave. The sequence demonstrates the divers’ sense of duty, and serves as a fascinating anecdote – what are the odds they find another group down there? But it also sets up an entirely new sense of tension. By showing how hard it is to rescue the different group, it demonstrates for both the divers and the audience how impossible it would be to feasibly rescue the boys.

And while the obvious answer, both in the reality of the film and in real life, seems to be sedating them (I wrote down “sedate them” in my journal with absolutely no memory of how the rescue occurred), the film then spends half an hour explaining exactly why sedating them is a terrible idea. These are all events of the historical record, with footage that comes directly from news coverage, so in theory, it should not be this riveting. But that’s the magic of Chin, Vasarhelyi, and Eisenhardt’s filmmaking.

But The Rescue isn’t just a recreation of events. As one would expect from the filmmakers of Free Solo, The Rescue spends a great deal of time diving (my apologies for the pun) into the psyches of the men who would willingly swim in a claustrophobic cave. Each man is a hilarious puzzle in and of itself, with a similar origin story involving egotism, an inability to work with others, a lack of skill at other sports, and an unnamed potential for Asperger’s. None of these men do this for a living; it is a hobby for all of them – when they are introduced, they are introduced with the label “[Ordinary Job]/Cave Diver.”

That’s what makes them so fascinating – their passion for this death-defying sport is so overwhelming, they spend their free time not only participating in an insane pastime, but devoting time to become the best at it – the reason most of them found success in their rescue efforts is the fact they designed their own equipment. Perhaps the greatest example of their weirdness is Rick, the main weirdo who has the same energy that Honnold had in Free Solo. In one of the film’s best moments, Rick has to be talked into bringing the boys religious objects, because his analytically-driven brain fails to understand the use of religion or religious artifacts.

However, while the film does dwell on their egotism and quote-unquote “selfishness,” traits once again found in Free Solo, here these passions and character flaws create an unexpected, and ultimately heartwarming, arc. The cockiness here ends up serving not only as the means for performing a miracle, but as a flaw to overcome, with emotional results. Obviously the men’s emotional detachment serves an important purpose – it makes them better at diving, as well as more emotionally equipped, as the odds of finding the boys alive is nearly impossible. But it also creates a situation for these men to overcome.

The one recurring trait Rick, John, Vern, and the rest share is an inability to work with others. Not only do they have to rely on each other to make the dive, but they have to rely on an entire team of individuals for the rescue to work – anesthesiologists, Thai Navy SEALS, volunteers, engineers, and beyond. By learning to work together, the men are able to save the kids. And by creating this arc, the film turns its protagonists’ flaws into a journey, as opposed to an indecipherable character choice.

Indeed, more than anything else, The Rescue is a film about the triumph of the human spirit – a cloying cliché, to be sure, but one that never fails to tug on the heartstrings. As much as it’s about the insane abilities of John, Vern, and Rick, it’s also about everyone coming together to pull off a miracle, regardless of nation, creed, gender, or race. Everyone did what they were supposed to do, even if their tech left them woefully underprepared. This goes for the Thai SEALS, the British divers, the Australian volunteers, the engineers creating special drains to keep the caves from flooding and killing the boys and divers, and beyond.

Even the American, who doesn’t seem to do a lot, plays a vital role – invoking blind-eyed optimism and a refusal to quit on a suicide mission, which may be the greatest commentary on the American spirit ever put on film. Chin and Vasarhelyi capture all of these efforts in striking honesty and determination, so that when the teams finally find and rescue the boys (revelations that shake even the stoic divers to their core), it feels truly powerful in a way something like this often doesn’t.

If there is one complaint to be had with The Rescue’s recreation of history, it is the constant usage of media footage surrounding the event. The footage, coming from the BBC, CNN, MSNBC, NBC, and Fox News, is supposed to serve as a reminder, and to provide expositional filler, in order to create an uplifting narrative. But all the footage ends up doing is revealing the ugly sensationalism that surrounded the ordeal. In fact, with hindsight, it almost feels like the media machine wanted the boys to die.

There’s one sequence in particular involving former Congressman and current commentator Jason Chaffetz that supposedly sets out to show how the distressing nature of the ordeal, but instead appears heartless, as if the man is enthralled by the idea of death and salivating for some blood in the water. I mean, if you’re going to show a heartless assh*le sticking his nose into the rescue efforts for no f*cking reason, you could at least show us Elon Musk crafting his sh*tty little submarine and then calling the divers pedophiles out of jealousy. But that’s just me.

All quibbles about Musk and Chaffetz aside, The Rescue is a beautifully haunting film about the triumph of the human spirit. It manages to revel in the human body’s successes, celebrate a real-life miracle, and create moving arcs out of real-life ordeals. It’s not often a documentary is capable of accomplishing such a feat. Jimmy Chin and Elizabeth Chai Vasarhelyi have accomplished something truly special here. It’s a testament to heroes, an ode to working together and a masterful feat of filmmaking. And it is certainly one you won’t want to miss.

The Rescue is now playing in theaters; it will debut on National Geographic and Disney+ this winter