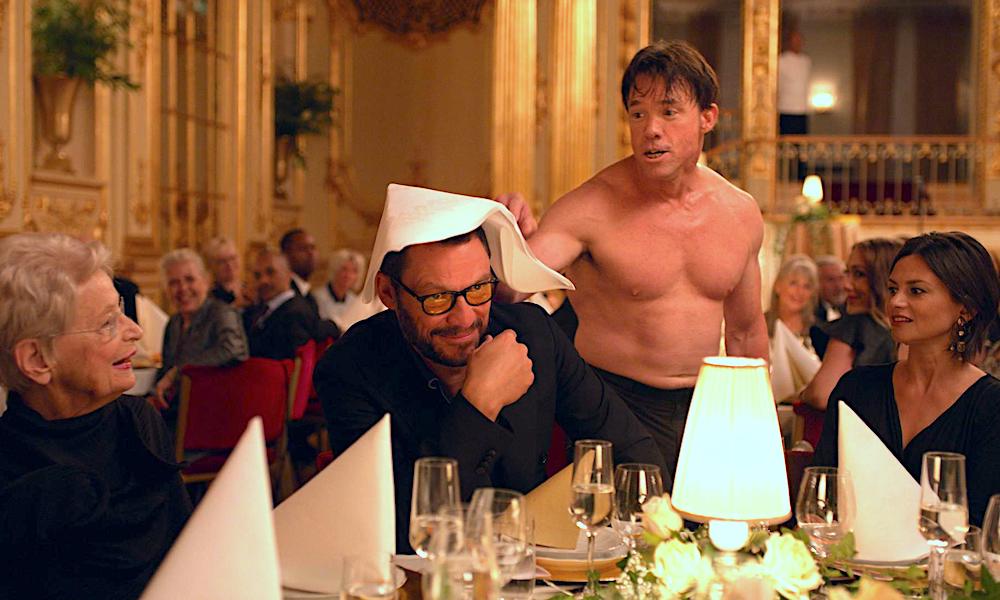 It’s always entertaining when the Europeans make satire. They are always bombastic, surreal, and creative in a way few American directors would ever dream of being. That is certainly the case with Ruben Östlund’s The Square, a critique of the modern state of the art world, censorship, and the uncaring nature of groupthink. And while it never feels like The Square knows quite what to say, it does so in such a creative, deliberate way, you’ll find yourself caught up in the journey enough that you don’t really mind the destination.

The film follows something close to a year in the life of Christian (Claes Bang), the curator of a renowned art museum in Stockholm. Christian finds himself stumbling through a series of events, each tying into the greater whole, including a quest to find his stolen cell phone, a feud with a ten-year-old boy, an affair with a journalist, an over-the-top performance art piece, and a tasteless (but hilarious) advertisement for The Square, an art piece dedicated to being “a sanctuary of trust and caring. Within it we all share equal rights and obligations.”

The biggest thing standing in the film’s own way is its lack of depth in its satire. I’ve written a lot about bad satire in recent days, from Kingsman to Downsizing, and I want to make it clear: The Square is a much better film than those. Unlike many attempts at satire, The Square knows exactly what it wants to say, and how to say it. It wants to critique modern society for being vapid, as well as for turning being a decent human being into a commodity that can be traded for clout (the less educated would refer to this as “political correctness,” but this is something much deeper and inherently dishonest). By having a clear vision in mind, and a fascinating backdrop of the modern art world, there are several instances in which Östlund can make his case. For example, one key scene in the film features a press conference in which Christian must discuss the infamous video with the media. The crowd berates him mercilessly for putting out such a horrible, offensive video, but when he apologizes and takes responsibility for it, they become appalled at his attempts at censorship. Within minutes their opinion transforms from “How dare you?” to “Isn’t this a bad precedent for our children?” This is an excellent criticism of the media – and our society’s – “offense” culture, in which we find a way to be mad about anything, one way or the other. A similar sequence criticizes society’s desire to use “political correctness” as a commodity, as a crowd uncomfortably watches as a man has a terrible bout of Tourette’s during an artist’s Q&A. And yet while he is interrupting and ruining the show, as well as berating the women in the audience, the artist calls out the crowd for not being “compassionate” to the man’s plight, even though the appropriate response would be to politely remove him to deal with his tics in private. However, while these ideas are well-formed, and do indeed get the laugh that they’re aiming for, they don’t offer anything more than a surface level criticism. Satire is built upon the idea of “Oh, isn’t this behavior dumb?” but it requires a whole lot more than just finger-pointing. There needs to be some analysis, even if the eventual response is “I don’t have the answers, but something needs to change.”

However, just because the satire is weak doesn’t make this a bad movie, or an unfunny movie. Because The Square is, if anything, a funny, well-made film. There’s a gorgeous, symbolic scene of Christian digging through the trash that keeps zooming out to show the trash pile grow wider and wider, until it beautifully and hideously fills the screen. There’s an extended joke where the characters wonder if the threatening letter they are writing should be written in Comic Sans (I burst out laughing at this joke). The character of Christian has not one, but several showdowns with a ten-year-old, each funnier (and more tragic) than the last. The infamous Square Video is one of the funniest moments of the year, and immediately jolted me with life just as I began to tire from the film’s length. There’s a sex scene that is preceded by the presence of a pet monkey, who wanders around the apartment doing chores and activities. And speaking of monkeys, let’s take a minute to talk about The Ape Scene, because that is the moment most people will be talking about. In a grand satirical look at the bystander effect, the horrors of Method Acting, and our own outrage. The climax of the film takes place at a fancy gala, where we are finally allowed to witness an interactive Modern Art exhibit known as the Human Ape. Essentially, it consists of a large human being wandering around with Gorilla Stilts, completely committed to the illusion that he is an Ape. The scene goes on and on painfully for about ten minutes, following the Human Ape as he plays with, growls at, and harasses the members of the fancy gala. Many people call for help, and yet none get up to act. Eventually, the human gorilla harasses a woman, and it is only then that the crowd gets up to attack him – not because a human being has crossed a line, but because animals shouldn’t behave that way. It’s a disturbing, humorous, perfectly executed scene that will sit with you long after you leave the theater.

As for the performances, each actor does their duty quite well. The standouts, as far as I’m concerned, would include Claes Bang, Elisabeth Moss, Terry Notary, and Elijandro Edouard. Bang centers the film perfectly as Christian, pomping and preening around the screen as the perfect metrosexual faux-liberal artist. Meanwhile, Moss doesn’t get nearly enough to do as art journalist Anne, almost to the point it’s a bit offensive. However, the film shines so brightly whenever she’s onscreen that I just want to sing her praises from the rooftops. The sequence where she does battle with Bang over a prophylactic is one of the film’s best visual gags. Terry Notary is mostly known for his motion capture performances in the Planet of the Apes and King Kong films, but given the chance to show his face while playing a gorilla, he really has a clear chance to shine (as I said, his performance makes for the film’s best scene). And young Edouard has such a grasp on line delivery and acting that I’m sure he’s destined to become a star of Swedish cinema. At least I hope so.

Despite being two and a half hours long, The Square still feels like an unfinished work. It feels like the satire could go so much deeper than it ever does. However, if a film doesn’t quite hit all the goals it sets for itself, but still entertains the audience, is that a bad thing? Even if it leaves its work half-finished, it still manages to earn its laughs, provide good performances, and craft a well-told, often solid story. Could it stand to lose a half-hour in its quest to hone the satire? Certainly. But as it stands, it is already a grand satirical epic, and one you’ll find yourself entertained with after you watch.