‘The Tragedy of Macbeth’ Review 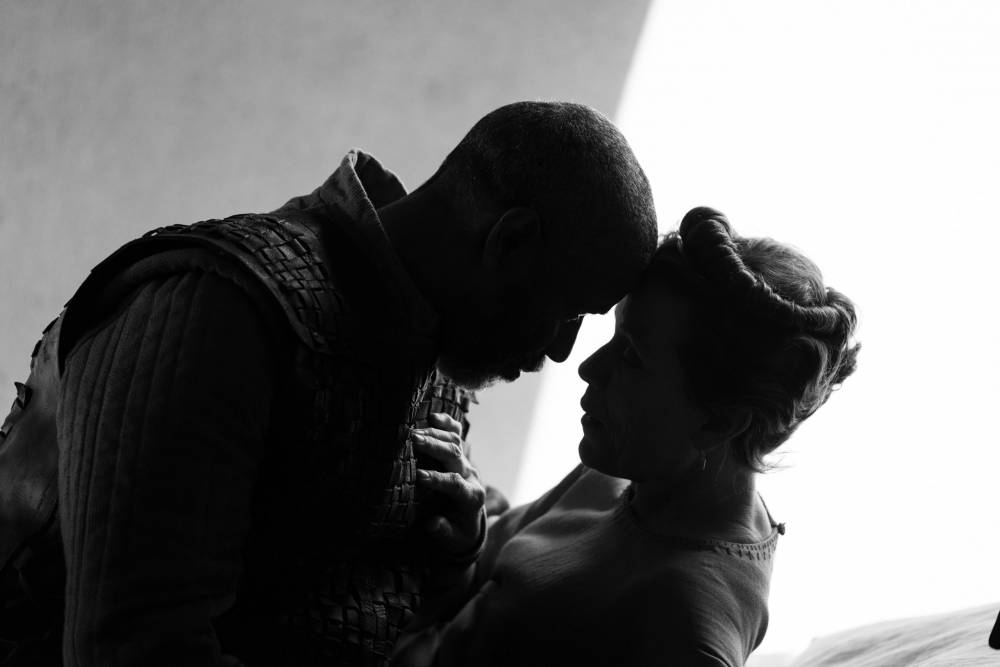 It is going to be a tough challenge to make it through this review of Joel Coen’s latest film without using the “M” word. I don’t mean Macbeth, the word accursed in the theatrical realm and often replaced with “The Scottish Play.” No, I mean “masterpiece.” As a rule of thumb, I don’t use the word in reviews, due to recency bias and the way things age as one sits with them. And yet, it can’t be helped. Despite my disdain for all things Shakespeare (although, admittedly, I do enjoy Macbeth’s simplicity and prose more than most), Coen has accomplished nothing short of a towering marvel in his first solo outing. The Tragedy of Macbeth is a towering achievement on both a technical and performative level, and in these early days after seeing it, it’s hard to think of it as anything less than the greatest Shakespearean adaptation of all time.

Based on one of Shakespeare’s most well-known plays, The Tragedy of Macbeth follows Lord Macbeth (Denzel Washington), a Scottish lord, in the aftermath of a decisive victory quashing a rebellion against King Duncan (Brendan Gleeson). On his way home from battle, he encounters three witches (Kathryn Hunter), who tell him that he is destined to be king. After conversing with his wife (Frances McDormand), Macbeth sets out to make this vision a reality, on a path filled with darkness, conspiracies, and murder.

It should come as no surprise that Joel Coen, one-half of the Oscar-winning Coen Brothers, knows how to make a great film. He has, for decades, been a master of blending genres and themes within an engaging and entertaining story (one of Shakespeare’s most admirable qualities). However, there has been no evidence to date that he could adapt a Shakespearean epic, or do so in such an engaging and fascinating manner. The reason this adaptation stands out is that Coen interprets the story literally in his execution, and yet laces in new themes and ideas that are just as universal. As opposed to the traditional interpretation of a young, power-hungry couple making a power play based on greed and corruption, this Macbeth follows an older couple who has, for generations, watched younger and less-experienced noblemen, played perfectly as dipsh*ts by actors like Harry Melling take over and earn new titles and lands. Now that they have a shot at the crown, they’re not letting it pass them by. It’s a visceral, human interpretation that certainly resonates in the modern world.

This all works, of course, because Coen’s innate understanding of the weird perfectly suits him for Shakespeare’s weirdest, darkest story. Coen’s fills have always possessed a tinge of creepiness and darkness and tragedy, all of which are embedded deeply in Shakespeare’s classic. And Coen finds a way to perfectly marry his blend of weird with Shakespeare’s. This includes embracing the original’s underlying sense of comedy and blending both artists’ love of kooky side characters, like the infamous Porter. This includes playing up the hyper-violence of the original text, including the deaths of Macduff’s family or the violent final act. Or it could just mean the occult – Coen has a blast playing with the idea that these creepy, contorting witches are either one insane woman living in the woods or three demons from Hell. It all adds to an atmosphere that Shakespeare himself couldn’t dream of, and elevates the text in a way no Shakespearean adaptation ever has before, save for maybe Akira Kurosawa.

But The Tragedy of Macbeth’s greatest accomplishment, above even Coen’s interpretation of the text, is its technical presentation. In terms of atmosphere and technical prowess, I’m not sure the last time I’ve seen a director so adeptly handle a film. Coen leans into the techniques and imagery of the old masters, in a way that amplifies the universality of Shakespeare, the universality of cinematic language, and the starkness of the text. Throughout the film, there are allusions to Dreyer, and Welles, and Murnau, and Bergman, and yet the final product is wholly and unequivocally Coen.

Of course, a great deal of credit is owed to Bruno Delbonnel, who has crafted some of the greatest cinematography I have ever seen. There are several shots in this film that are simply breathtaking, and will haunt you for days to come. For example, when the witches first appear, they are shown as one woman reflected into three within a pool of water. As the fog rolls in, they are revealed to be three women with one reflection. It’s a simple trick, and yet it completely underlies the magic of cinema. And I’m still thinking about the “Is this a dagger?” monologue, framed here as an extended take as Macbeth walks down a long hallway of columns, with light alternating between shadow and illumination as his soul hangs in the balance.

Along with the stark brilliance of the black and white cinematography, Coen’s aesthetic is aided by Stefan Dechant’s production design, which leans into the use of massive sets, as was done in the early days of Hollywood. The scale and look of this is daring and haunting, blending classical designs and worlds with a haunting sense of surrealism. These sets also add to the sound design, some of the best of the year. The screech of birds, the thud of knocking and footsteps, the steady dripping of wine and blood all blur together into a disorienting world of terror and insanity. Visually, Coen fills his world with fog, and smoke, and black birds of death, adding to the story’s underlying creepiness and sense of impending doom. And it all blends together with the editing by Lucian Johnston and Reginald Jaynes (a play on the Roderick Jaynes pseudonym shared by the Coen Brothers on all their films), simultaneously subtle and cool in its dissolves and match cuts. It is a definitive work of a modern-day master, from top to bottom.

Of course, a Shakespearean adaptation is only as good as its actors, and here, everyone brings their A-game. Actually, that’s an understatement. Everyone brings their A+ game. Denzel Washington, perhaps our greatest thespian, is marvelous in the titular role, to the surprise of no one. Denzel’s performance makes the central character’s journey, from a man who abhors killing and refuses to execute a man into a mad, bloodthirsty tyrant, wholly believable, all while Shakespeare’s words flow like honey and poison from his lips, depending on what he’s saying. It’s a role he was born to play, and has never had the chance to before. McDormand, meanwhile, has a different journey as Lady Macbeth. She is consistently good throughout, but she never shines in the role the way Washington does. That is, of course, until the legendary “Out, damned spot” scene. In this moment, she transcends the text and reaches new heights, both in Shakespearean lore and in her own career. It’s a crowning moment destined for her future Lifetime Achievement Award reel.

Amongst the rest of the cast, everyone’s having a grand old time playing Shakespeare’s most iconic characters. Gleeson makes for a jovial King Duncan, while Harry Melling hilariously plays Prince Malcolm as a dorky idiot on the verge of inheriting the crown. It’s a funny angle to the character, and one that feels fresh and alive in this adaptation. Speaking of comedy, Stephen Root shows up in one scene as The Porter, one of Shakespeare’s most famous (and controversial) comedic side characters, and plays him like the perfect Coen-esque weirdo that he is. It’s a bold choice, and one that works perfectly well. The great Ralph Ineson shows up for a terrific monologue at the top of the film, which helps ease audiences into the world Shakespeare has built. And in their one famous (and tragic) sequence, Moses Ingram and Ethan Hutchison dominate the screen as Lady Macduff and Macduff’s young son.

But for my money, there are three performances in this film that tower over the others, thanks to the strength of the actors playing them. Corey Hawkins, who has been having an incredible year on the heels of In The Heights, absolutely lavishes over the role of Macduff, Macbeth’s archenemy. He plays his character’s suspicions quite well, and during his character’s emotional final act, he unleashes his fury in a visceral tour-du-force. Meanwhile, the film’s secret weapon might be Alex Hassell as Ross. A minor role in the play mostly used to dispel information, Coen and Hassell have rewritten the role from an unmemorable side character to a major force for commentary. Hassell plays Ross as an advisor never looking to make waves, and who is smart enough to consistently play both sides against each other to survive. It’s a bold new take on the character, and whenever Hassell is onscreen, you can’t take your eyes off him.

And then there’s Kathryn Hunter. I could spend this entire review talking about Kathryn Hunter. Hunter plays all three witches, not to mention a sage old man whom Ross encounters and who later plays a pivotal role in the story (perhaps to emphasize the witches’ constant surveillance of the chaos?). Hunter commits to the role from the jump, contorting her body and using her scratchy, otherworldly voice to add to the characters’ terror. Is she a mad old woman spewing nonsense? Three witches trapped in one woman’s body? A true demon (or demons) from another world? These are questions that the text may not ask, and Coen only hints at, but Hunter’s performance compels us to think about. And that is the essence of a truly great performance. If you think of anyone after you leave the theater, it will be Hunter and the Witches she embodies.

I don’t know what else I can say about The Tragedy of Macbeth. What Joel Coen has accomplished here is nothing short of breathtaking. It is a Shakespearean adaptation that runs a miraculously short one hour and forty-five minutes, and yet feels like it’s over in ten. It makes a centuries-old text feel alive and vivid and haunting in a way that few films ever have with the Bard’s works. And it is the history of Western art – theatre, literature, cinema, and beyond – boiled down into one perfect encapsulation. This is the work of an entire field at the top of their game – the director, the actors, the crew, etc. – and it is one that cannot and should not be missed.

The Tragedy of Macbeth will stream on Apple TV+ on January 14th. It is now playing in theaters