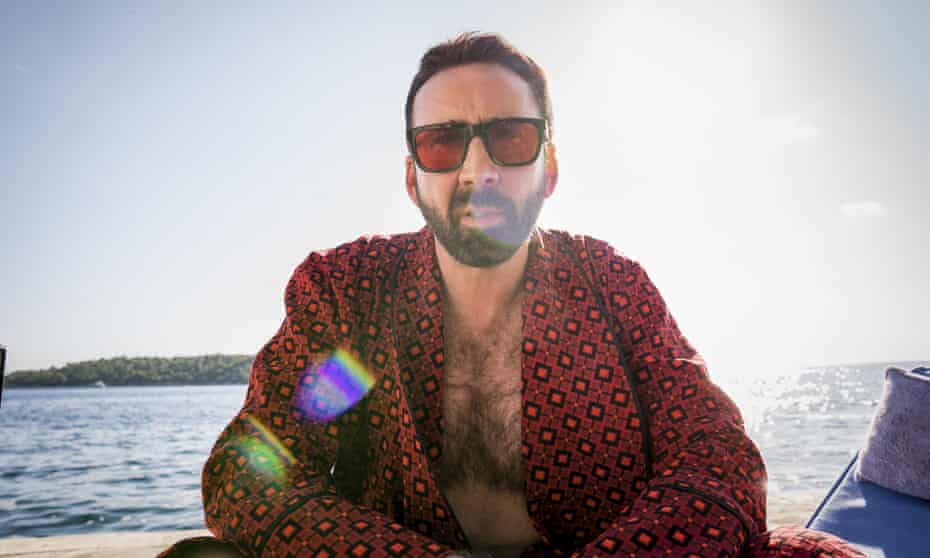 There’s a common sentiment I’ve shared on The Sacred Wall several times before, and I will say it once again, loudly and proudly: I f*cking love Nicolas Cage. I wholeheartedly believe that the man is one of our finest living actors, playing everything from romantic lead to comedic foil to action star in his 105 film-spanning career. His work from 1983 to 2004 is unparalleled in its magnitude – his Oscar-winning work in Leaving Las Vegas is amongst the finest I’ve ever seen – and even when he started taking…less fulfilling projects when battling money issues over the last twenty years, he never phoned it in.

And thanks to both the quantity and quality of his works over the years, Cage has become an Internet meme, a point of fascination amongst Millennials and Zoomers. This fascination has culminated in The Unbearable Weight of Massive Talent, a film honoring Cage’s legacy the only way it can be honored – with Cage playing a gonzo version of himself. It’s not quite the genre-bending meta-commentary many will expect it to be. But what it is is a lovably rendered comedy good for a few laughs, a few cheers, and a winning homage to one of cinema’s most iconically insane faces.

After over forty years in the movie industry, and with 105 films under his belt, Nicolas Cage (Cage) is ready to pack it in. After all, he’s an Internet punchline, directors like David Gordon Green don’t want to work with him, and the time away has put a strain on his relationship with daughter Addy (Lily Sheen). Due to his outstanding debts and obligations, Cage decides to take one last offer before calling it quits: a private birthday party for billionaire super fan Javi Gutierrez (Pedro Pascal).

As it turns out, Javi’s passion is the kick-in-the-pants the actor needed to remember why he loves the craft, and the two form an inseparable bond of kinship and camaraderie. It’s a shame that Javi may, in fact, be a notorious arms dealer, and the CIA now needs the Hollywood legend’s help bringing him down.

What I can appreciate about Massive Talent is the fact that the film can stand on its own outside the confines of Cage super-fandom. Writer/director Tom Gormican has crafted a cute love letter to weirdo actors that works even standing on its own. A niche film that only appeals to Cage fans would still make for fine viewing, but you could easily replace Cage at the center with a fictionalized superstar and Talent would still work. The jokes predominantly land (with a Paddington 2 joke standing out as a showstopper). The filmmaking is staged respectably and responsibly – few studio comedies attempt a shot as impressive as one where Cage’s face overlaps with his own mannequin (i.e. his legacy).

And the soundtrack is full of gems, ranging from Creedence Clearwater Revival to the more-obvious Trisha Yearwood “How Do I Live” cover. Sure, the story eventually gets a little too convoluted for its own good, and it regrettably tries to hit obvious emotional beats. But at least it has the excuse of providing meta-commentary on Hollywood blockbusters – an excuse with merit, given the obvious Adaptation. allusions. The film is prudent with its laughs, never taking itself too seriously, and for that reason, it works.

However, with that being said, the film is an absolute smorgasbord for those who celebrate at the feet of the master. This film is a love letter both to Cage and to his superfans, a notion it makes clear from the jump as a group of Italian teenagers get together for drinks, a smoke, and a viewing of Con Air. Each reference, both good and bad, is a treat for those who scour the news for Nic Cage stories, used as jokes that work even if the audience isn’t in the know.

There’s his close friendship with David Gordon Green, his outlandish persona both onscreen and off, his cinephilia and love of old movies, his love to read, his relationship with the critics (at one point he laments, “Any other job would praise hard work. But as an actor, all I get is ‘You’re making too many movies, Nic!”), and even his spending issues. When he hits rock bottom, he drinks poolside whilst the filmmaking begins to resemble his Oscar-winning role in Leaving Las Vegas.

Oh, and in case all of this isn’t enough, Cage gets a chance to let loose with a second version of Nic Cage – an imaginary representation of his id named Nicky, modeled after his younger self (think Wild At Heart era), who seems to be responsible for his most wild and unhinged moments. It helps that Cage is a good sport about it all, but it’s hard to think of a reason why he wouldn’t be – even when the film offers up criticism of his public persona or acting choices, it does so with love and honor. After all, some of those unhinged performances are his most impressive.

In terms of the acting, everyone’s doing an admirable job. Sharon Horgan and Sheen do fine work as Cage’s family, Paco León shines as Javi’s cousin, and Neil Patrick Harris is smart casting as a sleazy agent. I also want to commend Tiffany Haddish, who is an excellent foil as Cage’s CIA handler. But ultimately, this is a two-person film, from beginning to end. Cage is, of course, amazing playing himself. It’s silly to say that only he could have played this role, but…only he could have played this role.

And yet, he’s almost (only almost) outshone by Pascal, who is all over the map as fanboy billionaire Javi. Pascal can play any emotion – fanboy energy, puppy-dog eyes, and a general commitment to the bit that makes him a perfect match for Cage’s energy. The duo plays off each other well, even finishing each other’s sentences at one point, and are so gifted at their craft they could easily exchange roles and the film works just as well.

The Unbearable Weight of Massive Talent is a boisterous comedy that can serve two equally important functions. If you’re a casual moviegoer looking for a good time, Talent won’t disappoint. You’ll get your laughs, and you’ll enjoy your afternoon – this will certainly be a future FX/cable hit. But if you’re a Nic Cage superfan, this film is a love letter to you specifically, a thank you for years of loyalty despite confused looks from the general public. As a critic speaking for the former group, I was mildly pleased; as a member of the latter, I’m elated.

The Unberable Weight of Massive Talent will be released in theaters tomorrow, April 22nd