‘To All The Boys I’ve Loved Before’ Review

HomeReviews‘To All The Boys I’ve Loved... 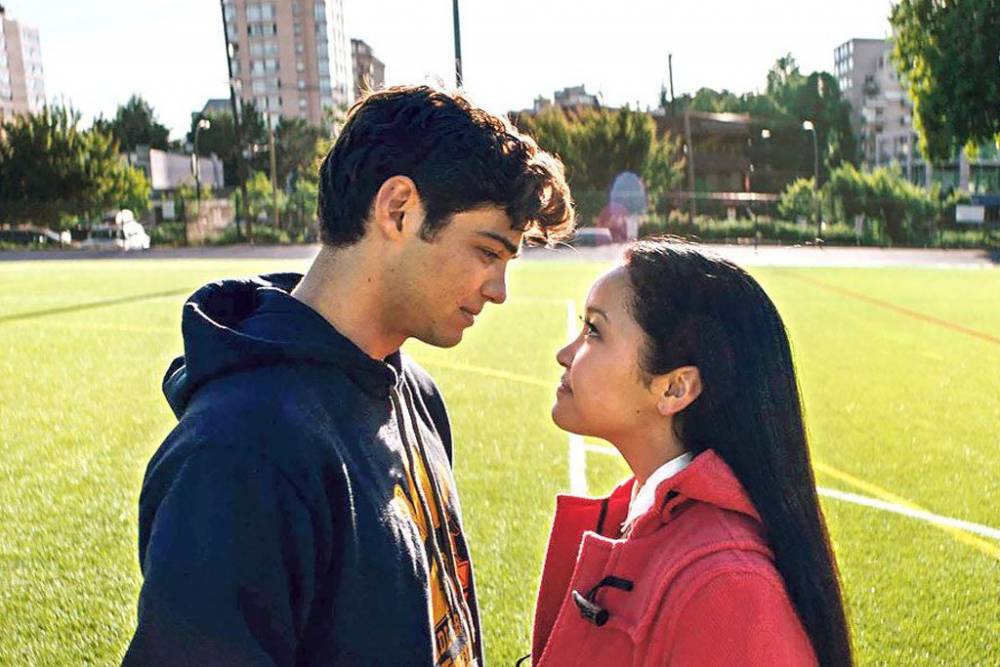 To All The Boys I’ve Loved Before is the cinematic equivalent of drinking straight maple syrup with a straw. It is sweet to a fault, cute to a T, and almost earnest in its quest to make you love it. And yet, that’s exactly what you’ll do. Susan Johnson has decided to perform a U-turn from the honesty of recent teen films like Lady Bird, Edge of Seventeen, and Eighth Grade, instead returning to the campy days of John Hughes, Cameron Crowe, and The Princess Diaries; and she has successfully proven that there’s still room for both in this crazy, crazy world.

Lara Jean Covey (Lana Condor) is your average teenage girl. Highly emotional, yet too introverted to act upon these feelings, she channels her energies into her two loves: reading romance novels, and writing detailed love letters to whichever boy she’s crushing on at the moment. These range from boys she knew at summer camp to Peter Kavinsky (Noah Centineo), her first kiss and the most popular boy in school, to her former best friend/sister’s recent ex-boyfriend Josh Sanderson (Israel Broussard). However, when her little sister decides to mail the letters, Lara Jean finds herself in a series of unfortunate dilemmas. Unable to face Josh so she can save face with her sister, Lara Jean concocts a crazy scheme – she and Peter will pretend to date, to help her avoid Josh and help him make his ex-girlfriend jealous. But what if…no, it couldn’t be…what if they fell in love while pretending to be boyfriend and girlfriend? Oh, what a wacky scenario!

I tease the film in that previous synopsis, but let’s not mince words about what we’re dealing with here: this is the rom-com to end all rom-coms. It’s dorky and cheesy and emotional and clichéd. Hell, the plot literally rests on a love-ish triangle involving the Boy Next Door vs. The Fake Boyfriend. There are so many clichés they actually have to pit them against each other. And I’ll admit, there’s so much of this schmaltz to dig through, it takes about 25 minutes to really get going. But as ridiculous as the film is (and trust me: it is), it is also refreshingly cute, and respectably earnest. While the dialogue has more cheese than a plate of Quatro Quesos Dos Fritos, it also possesses a sincerity that many mature, adult romances don’t master. As silly as it may seem, there is something truly honest in watching a young girl share a kiss with her first boyfriend, pause, and blurt out, “I’m going to trig.” Like the best of the genre, it chooses to forgo realism in order to craft its own funny, working lingo. Hell, I even enjoyed the voiceover, and I hate voiceover. Like Mean Girls before it, the film finds something endearing in the inner workings of a likable teen girl’s mind – there’s optimism, emotion, and a keen sense of irony. And to the film’s credit, while it’s perfectly content just being a cutesy romance, it does have a few moments of exploring something deeper. There’s an interesting character twist by showing the effects of romance novels and romance movies on Lara Jean’s mind, feeding her with false notions of idyllic love and convincing her that hilariously over-the-top behavior is appropriate. And there’s an added layer of depth in the subtle portrayal of the loss of parental figures, fear of commitment, and ethnicity all coming into play. It’s not the focus, but it’s important nonetheless. However, the reason I really like this film is its smart enough to play up the chemistry between its leads. I’ll talk more about Condor and Centineo’s performances below, but let me establish right here and now that they are simply smoldering in their portrayal of young love, selling the emotion and the heart from beginning to end. Watching them flirt and smirk, touch and bond over movies (for the record, Lara Jean is ABSOLUTELY correct in every single way about Sixteen Candles) is an absolute delight, and it makes the movie infinitely more enjoyable. After all, the only thing that you really need to do well in a good rom-com is create a realistic, but SUPER CUTE, portrayal of love.

Still, I did have a few issues with the movie, keeping this from turning into a full-on rave. For one, this film relies a lot on those clichés listed above. And look, I get that clichés are almost a necessity in a genre like this, and the film is at least aware of how on-the-nose its being, but I wanted either a little more subversion or a little more tongue in cheek to really help this film feel original. And while we’re on the subject of clichés, two of the film’s biggest issues stem from a systemic problem inside the genre: an overabundance of coincidence. There is only so far that an audience can be expected to leap when logic is concerned, and when dealing with a fairly realistic genre, like the rom-com, going too far can really hamper a film’s success. For example, why does Lara Jean keep these letters for so long? Doesn’t she realize that should anyone ever see them, the ramifications would be catastrophic – not to mention the lack of a benefit? And thanks to how strong the chemistry is between the two leads, the fact that they so clearly love each other from so early on makes the inevitable dragging out of the plot a little hard to believe. I get that when it comes to romantic comedies, you just have to go with it, but it all just seems like too much, ya know? Oh, and considering how important he is to the first act of the film, I wish that Josh had been handled a little better. I mean, he’s all over the first act of the film before disappearing for long periods of time, only to act inconsistently with his previously established character. And sure, the character eventually gets vindication, but I just wish he had some consistency. Overall, the film’s pros vastly outweigh the film’s cons, but it is impossible to pretend they don’t exist.

In terms of the actors, despite their age and their lack of star power, I am awed at the talent onscreen. These teens are members of a generation of stars to come, especially Condor and Centineo. Condor is simply marvelous as Lara Jean, letting her inner-Molly Ringwald loose and running away with the film, thanks to her heart, her mind, and her general adorability (I guess that makes her part-Ringwald, part-Meg Ryan). And as mentioned above, Noah Centineo is one of the big screen’s great love interests, making Peter a real heartthrob that stands tall with his leading lady. Centineo has strong comedic timing, an emotive face, and he manages to sell even the little, subtle movements, like a scene where he goofs around with Lara Jean’s little sister and subtly but knowingly moves the popcorn off the couch to keep from spilling it. Get you a man who knows basic common courtesy, ladies. And Israel Broussard is solid as Josh, even if, as mentioned above, I wish he had a little stronger material. Most of the teens are varying degrees of good to great, from Emilija Baranac as the stereotypical but well-acted mean girl Gen and Trezzo Mahoro as former crush Lucas to the truly wonderful Janel Parrish and Madeleine Arthur as Lara Jean’s older sister and best friend, respectively. And John Corbett shows up as yet another wonderfully cheesy dad in the current trend of wonderfully cheesy onscreen dads. More of John Corbett in movies, please! There are very few bad actors in the film, but there is one I want to call attention to, and that is Anna Cathcart as younger sister, Kitty. I’m not sure if my issues with Cathcart lie with the characterization or the performance, or maybe both, but there is little redeeming here. Her performance is grating, and the choices her character makes are truly awful. It is hard to justify her being in the film at all, other than to move the plot forward, but quite frankly, I disliked her more than any cliché or contrived plot device in the film. What a shame.

To All The Boys I’ve Loved Before knows exactly what it’s doing. It’s not interested in any flashy plot twists, or game-changing material, or even originality. It’s perfectly content at taking what’s been done before and doing it well. And once you accept this fact, it becomes easy to get onboard. I greatly enjoyed this film. I liked the writing, I liked the acting, and I liked the fact that I could smile during it. Is it high art? No, but who cares? It’s sweet and it makes you feel good. Isn’t that enough?