‘Venom: Let There Be Carnage’ Review

HomeReviews‘Venom: Let There Be Carnage’ Review 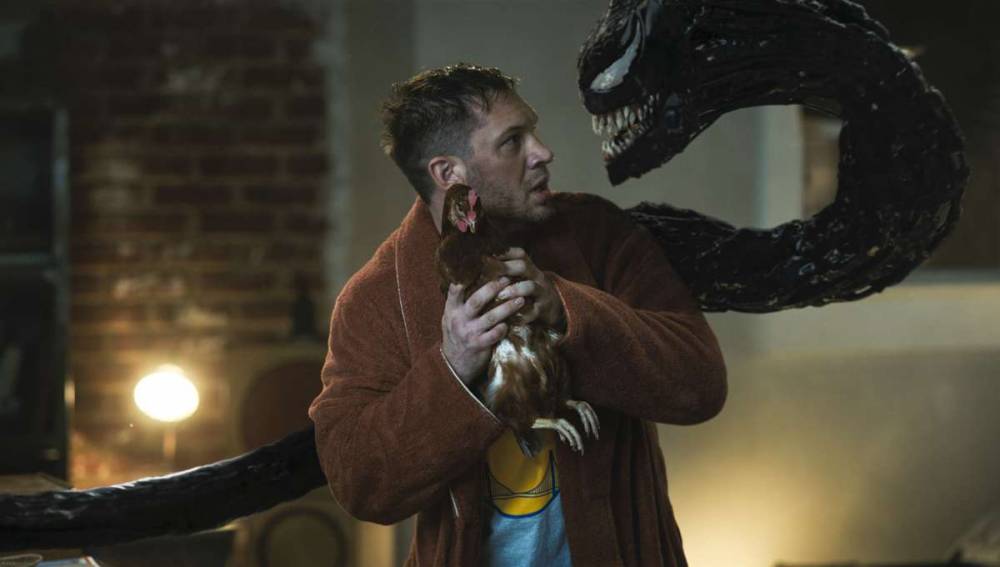 In 2018, Venom released in theaters, to a shockingly divided reaction. Critics lambasted it for being tonally and wildly uneven. Audiences loved it (to the tune of $800 million) for this very reason. And it’s hard to argue with either group on this one: Tom Hardy sauntered through each frame from a completely different film than the filmmakers and other actors were interested in making, diving into lobster tanks and contorting his body in confusing ways while director Ruben Fleisher did everything in his power to stay on target. In Venom: Let There Be Carnage, we experiencing something of a horse swap under Andy Serkis’ direction. On the one hand, the saga is now self-aware to its own absurdity (Hardy helped write the script alongside acclaimed writer Kelly Marcel). On the other hand, this self-awareness gifts us with the greatest act of scenery-chewing overacting since The Lighthouse – maybe even Face/Off. The question is, does this self-awareness make for a better film? The answer, it seems, is yes. Overall, Let There Be Carnage, is a smarter, sillier, and more entertaining entry in the series – and maybe the most gonzo execution of a superhero film since Spider-Man 2.

It’s been three years since Eddie Brock (Tom Hardy) became host to a cursing, homicidal alien symbiote named Venom (also Hardy). The duo try their best to live in harmony, but due to the unwanted attention drawn to Venom’s diet of…erm…villains’ brains, Eddie keeps Venom mostly hidden, forced to subside on chocolate and chicken. This causes a rift between the happy couple, forcing them to reevaluate their relationship. Unfortunately, this rift couldn’t come at a worse time. You see, Eddie has just written a huge expose that led to serial killer Cletus Kasady (Woody Harrelson) being sentenced to death. And during their final visit together, Kasady takes a bite out of Eddie’s arm – a move that allows his blood to mix with both Eddie’s and Venom’s. The resulting mixture creates Carnage (also Harrelson), a blood-red symbiote who is better, faster, and stronger than his father, and who, like any Oedipal creation, wants nothing more than to kill his parent. Hunted by Carnage and the love of his life, mutant Frances Barrison (Naomie Harris), Eddie and Venom must mend their relationship and find a way to defeat an indestructible homicidal madman.

While I wouldn’t have thought so in advance, Andy Serkis is the best possible director to bring Venom to life. It’s not because he has an innate understanding of CGI characters – although this certainly doesn’t hurt. It’s the fact that Serkis maintains the world’s self-serious attitude while still wholeheartedly embracing the silly. This is a film where a man whose body is half-controlled by a muscled-out dudebro alien must do battle with another muscled-out dudebro alien, this time controlled by a serial killer. It’s supposed to be fun! Serkis understands this self-awareness and swerves into the drift, as opposed to Fleischer’s previous entry, which constantly tried to swerve against the drift.

Examples of a smarter, more strategic hand can be found throughout, from the jokes to the entire structure. Obviously I love watching Venom’s desire to become a superhero – cape and all – despite his entire worldview involving eating bad guys, or the fact that Venom can only eat chocolate and brains, because the chemicals and nutrients found in both most resemble his home planet’s food. And I could write 1000 more words about the fact that Carnage, the offspring of an alien symbiote (a terrifying rarity, if Venom is to be believed, despite the fact he never explains why a “red one” is so terrifying) is also a fully trained hacker.

But above all, I’m referring to screenwriter Kelly Marcel, Serkis, and Hardy’s decision to fully embrace Venom and Eddie as a couple. Their exact relationship, in all its complexities, more accurately runs a full gamut – at times, Venom is a hurt, slightly toxic boyfriend who just wants to run free while the stuffy Eddie keeps them, proverbially, “in the closet” (in fact, these are Venom’s exact words). At other times, Venom seems to be play the cool older brother/best friend who lives in his mom’s basement making a mess and being perpetually stoned, but who, despite terrible advice, does indeed make you cooler. But while it’s never an all-out romantic relationship, the archetypal story beats are there. The duo experience lover’s quarrels, breakups, “see other people,” and ultimately reach a third act resolution involving heartfelt apologies. Oh, and Venom sings Fred Astaire to his parasitic host. This movie is a masterpiece.

It also cannot be overstated that, on an aesthetic level, Serkis’ direction is far better than it has any right to be. While recent superhero directors like Taika Waititi and yes, even Zack Snyder have played with the idea of iconography and bold aesthetic choices, Serkis has crafted perhaps the most original, memorably designed superhero film since…maybe at least Tim Burton and Sam Raimi. This is a film that opens on spooky mansions and teens speaking in what I can only assume is a bad Woody Harrelson impression (or, perhaps more likely, Harrelson’s voice coming out of a 16-year-old’s body, which is much funnier). The editing is, at times, intentionally bad – including a ridiculously dumb sequence of cartoonishly fast doodling, and there are cartoon segments featuring a five-year-old Cletus Kasady murdering his grandma, just in case you didn’t know he was supposed to be evil. What world-building.

And then there are the action and comedic setpieces, which each stands out as impressive, colorful moments of artistic expression. The sequence where Kasady first transforms into Carnage and escapes San Quentin is perhaps the most insanely fun villain intro since Spider-Man 2. The sequence where Carnage rescues his childhood sweetheart Frances from a high-security facility is fantastically shot and executed. And the film’s climax, set inside an old church in downtown San Francisco, is laced with such dazzling images and filled with such well-executed action, it stands out as one of the most visually memorable sequences since at least Raimi’s Spider-Man series. It’s certainly more memorable than 95% of Marvel and DC films in the last decade. Oh, and did I mention that Venom, shortly after his “break-up” from Eddie, goes to a Halloween rave to declare to a crowd of hipsters that he is out of the closet while covered in glow sticks? I love my big dumb gay alien icon.

Of course, like the first film, Let There Be Carnage works because you never know what the hell Hardy is going to do next. And this time, he has another actor to ham it up against in Woody Harrelson. Hardy in particular is just as magical in this role. He has evolved his insane shtick from a man with no control over his body to a man who shares his body in equal parts (sadly no lobster tanks this time around). The insanity of this role, from Venom’s PG-13 laden outbursts to Hardy’s constantly contorting body eventually brought me to a stunning, exciting new conclusion: Tom Hardy may be our new Nicolas Cage. They both have unparalleled charisma and sex appeal inexplicably bottled up inside an effortfully effortless and wholeheartedly unhinged acting style.

On the other end of the spectrum, Harrelson is having a ball as a PG-13 version of Natural Born Killers’ Mickey. What Harrelson’s Cletus lacks in his original red clown wig from the first film (here his hair is an equally ridiculous red combover), he makes up for in hilariously drawled line deliveries. During one sequence shortly after his escape, he asks a murdered gas station attendant “Got any of those Internets?” In another, he pronounced the word origin as “or-EE-gin.” These are the acting choices I live for. My only critique of Harrelson’s performance is that he, and the film, try to ground the character with a sympathetic story arc as an abused kid who only found love with an equally lost soul. I’m not mad they tried to craft a three-dimensional character out of a literal cartoon. I’m just slightly disappointed – just let the crazy man be crazy!

Amongst the rest of the cast, everyone else has elevated from “playing it super-straight” to “still straight, but at least aware to the universe’s weirdness.” I’m incredibly happy that after about fifteen years of simply playing sad, neglected wives of oftentimes dead children, Michelle Williams finally has a chance to be fun. She’s clearly having a blast, and we love that for her. Her role as the confused straight man instead shifts to two characters, of equal note. Reid Scott appears as Williams’ character’s fiancé, and I appreciate he fits the world of sardonic, begrudging acceptance of invincible alien carnivores.

Meanwhile, Stephen Graham plays a gruff police detective who seemingly walked off the set of a serious police procedural. His straight man presence is the façade of normalcy for which everything else can be measured, and it makes for a better film. My only real question mark in the cast is Naomie Harris. It’s not that I don’t love her – I think she’s a terrific actress. It’s just that as goofy as the character is, I don’t feel like they let Harris fully embrace that. She doesn’t get to go ham like the others, outside of a creepy voice. It essentially feels like a rehash of her work as Tia Dalma in Pirates of the Caribbean all over again.

Nevertheless, Venom: Let There Be Carnage is a big, dumb, shiny masterpiece. It’s a more unique, more complete vision of a story than its predecessor, wisely marking what worked and what didn’t to make for a better film. Is it perfect? God no. But it’s not trying to be, and surely it deserves points for that success. It walks the thin line of complete earnestness and reined-in self-awareness that never falters, and completely embraces its own ludicrousness. It’s the most I’ve laughed at a movie this year, the most I’ve cheered during this year, and some of the most fun I’ve had all year, flat out. Huzzah to Serkis, huzzah to Marcel, huzzah to Hardy, and Harrelson, and beyond. Huzzah for Venom, and should we all be so lucky as to embrace the carnage.

Venom: Let There Be Carnage is now playing in theaters