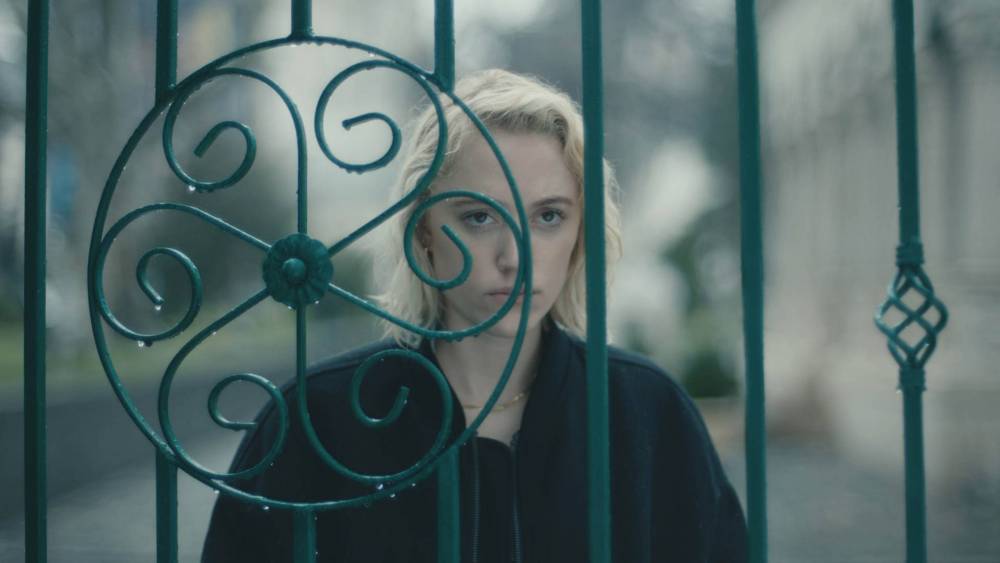 Can an ending completely save a film? That’s the question I found myself asking coming out of Watcher, the directorial debut of acclaimed short film director Chloe Okuno. With a catchy hook reminiscent of the early films of Polanski and Argento, Watcher felt more and more like a missed opportunity as it went on, both technically and narratively. Yet the final twenty minutes (give or take) of this film are so strong, it makes me wonder: does it end up redeeming itself?

Recent graduate Julia (Maika Monroe) has just moved to Romania with her boyfriend Francis (Karl Glusman), who has been relocated as part of his job. Julia doesn’t speak the language, and therefore has not found employment, leaving her at home all day, isolated from the world around her. It is this level of paranoia – not to mention recent reports of a serial killer hunting the city – that makes her more anxious when she notices a neighbor watching her through the window…or the seemingly ever-present fear that she’s being followed…

Okuno and screenwriter Zack Ford do an excellent job of laying out their simple, scary story from beginning to end. Ford finds ways to make the oldest horror story in the world (see Cat Person, and Repulsion, and Wait Until Dark…, etc.), while Okuno brings the scenes to life in dazzling and terrifying ways. She never lets up on that feeling of surveillance. A sequence set in a theater during a showing of the aforementioned Dark… is a taut exercise in voyeurism. And seemingly benign sequences are rendered squeamish thanks to Okuno and cinematographer Benjamin Kirk Nielsen’s decision to film from closets, corners, and outside windows. Apropos of the title, there’s always a sense of being watched – or, more terrifying, watching.

So why does this film, a blend of psychological thriller and giallo, feel so cold? It could be that very sense of repetition mentioned earlier – when a story is retold as often as this one, there needs to be something new to keep audiences invested. Here, we get about exactly what we expect. It certainly doesn’t help that while Okuno draws influence from Polanski and Roeg, those filmmakers crafted films that were colorful, well-lit, and exhilarating; here we have dull grays and dimmed colors, which not only amplify the film’s lethargic pace – it also leaves some of the film’s creepiest moments lost in a sea of blandness. Not even Monroe – so often a phenomenal actress and scream queen – can elevate things; the character is so dull, she can neither help or hinder the overall picture.

And yet, just as you feel ready to give up on the film entirely – the finale. Somewhere in the film’s final fifteen to twenty minutes, that spark so desperately missing from the film’s first two acts kicks in and electrifies the film. You’ll know it almost instantly – it involves character actor Burn Gorman sitting on a train giving an emotional monologue while the camera, inexplicably, begins to push in and engulf the screen. I won’t spoil anything more, you’ll just have to experience it yourself. But in those final minutes, the film manages to dazzle on a technical level, subvert and reinforce expectations before you have a chance to catch your breath, and leave you gasping for air at what you just beheld. You’ll only wish the rest of the film had been like it.

Watcher is something of a mixed bag; a promise of a talented writer and director on the rise who are still working out their kinks. I’m really curious to find out if that ending changes how I view the rest of the film. And I’m also curious if Sundance’s bandwidth failed to emphasize the shadow work in the background of most scenes. Perhaps that’s enough for me to give this film a second chance. But as for now, and my recommendation to you readers at home: Watcher is a solid way to pass the time some hot evening with nothing else to do. Just don’t expect much, and you’ll walk away just fine.