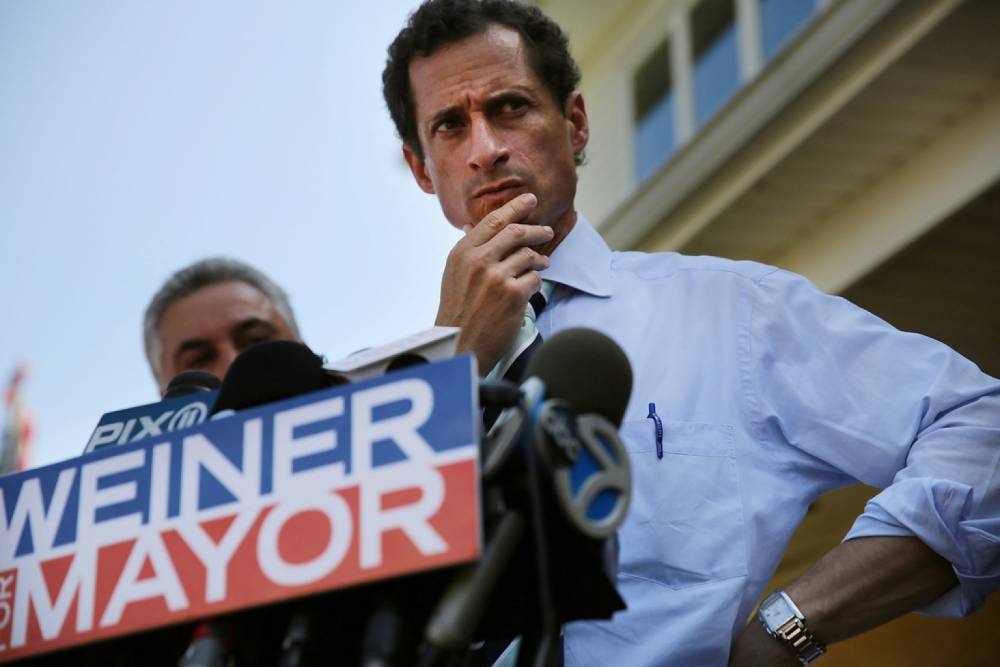 Weiner is many things. It’s a fly on the wall documentary. It’s a “Can’t Believe It’s True” story. It’s a Shakespearean history. It’s a Greek tragedy. But most of all, it’s a study of humanity, and who we are in 2016. Very rarely do documentaries get to capture reality the way this film does, because very few stories are as flat out weird as this one is. Not only is it the story of the fall, rebirth, and second fall of a beloved figure, it informs us that the entire period was documented. AT THE REQUEST OF THE SUBJECT! And yet somehow, in the process, we got the greatest character arc of any film this year.

Following a short prologue where Anthony Weiner, our tragic hero, curses himself out for allowing this documentary to be made. We then begin in medias res, as a passionate Weiner takes the country by storm, unleashing hellfire upon Congress for refusing to support the 9/11 heroes. It then follows his days as a hotshot Congressman, his marriage to Clinton aide-de-camp Huma Abedin. And then, suddenly, when you think Weiner’s stock can’t go any higher-a scandal. Somehow, a picture of his clothed erection ends up on his Twitter page. His “weiner,” if you will, if you’re going to follow the press’ lead. At first, he tries to deny it, before eventually, he has to confess and resign. However, months later, he decides to make a comeback, and runs for Mayor of New York City. The documentary is designed to show Weiner’s supporters the ins and outs of a campaign. And at first, it seems like it’s destined to be-his poll numbers are through the roof, he has thousands of fans showing up at rallies, and when rival candidates try to take the cheap way out and throw his past troubles in his face, the crowds boo, forcing them to actually debate the issues. Can you imagine? With his professional life in order, and his marriage stronger than ever, nothing can go wrong.

And then the other shoe drops. More sexts come out. This time, there’s nudes, false names (Carlos Danger), and illicit conversations. And this time, there’s just no way for Weiner to talk his way out of things. No matter how hard he tries.

Before I examine Weiner and his wife as a character, it’s important that we look at what this film says about us as a society. The film never really takes a specific side or stance on how to handle these revelations, but it also doesn’t try to sugarcoat the way we tried to make sense of it. The media is so swept up in trying to take this man down for sending inappropriate photos that it loses site of an actual election. They have no problem destroying not only Weiner’s life, but Huma’s and their son, as well. Weiner’s response to his Lawrence O’Donnell interview is a trainwreck, but honestly, could you have handled yourself any better if the question you were asked for a shameful moment was “What is wrong with you?” It’s a disgrace to the journalistic profession, and it’s the reason we are headed into an election where neither party likes their options. Furthermore, somehow the media decided that it would be glorious to canonize Sydney Leathers, the young woman who essentially admits, on camera, to performing a honey pot on Weiner in order to help break into the porn industry. If there is any figure that walks away from this a villain, it’s her. It’s impossible to listen to the glee in her voice as she describes destroying someone’s life just so she could get a few hours on Sean Hannity and turn those into a sex tape career. The final scene in the movie, where she decides to bring the press along to “confront Weiner in person” outside his apartment complex the night he loses the election is the nadir of America as a society. There’s no coming back from that. Not unlike Greek mythology, this film makes its chorus a character in the action. Only in this case, they are the villains, the monster, the beings bearing down on our “hero.” Unfortunately, unlike Medea, they can’t be the ones to explain the moral, because they are us.

I should now explore Weiner and Huma, who play like a modern-day Macbeth family. Honestly, if I were to strip them to their bare characteristics, you would probably try to name the Shakespearean play they came from. A young, well-spoken hero, rising the chain of power, married to the daughter of royalty, must face his own vices, and is eventually taken down by his own ego. It’s Macbeth, it’s Lear, it’s Hamlet, it’s Richard III, it’s Henry VI, it’s Weiner. The film never villainizes Anthony for his crimes, but it doesn’t condone them either. Watching him get caught in lie after lie is excruciating, and one particularly tough scene shows him smiling and laughing as he watches his interview with O’Donnell over and over again, as Huma looks on, horrified. It says more words than Shakespeare’s soliloquies ever did, playing like some sick modern take on Lear cursing at the winds, or Macbeth languishing over life’s meaninglessness. It’s done in almost complete silence.

Huma, meanwhile, is a fascinating character unto herself. Unlike her husband, she is not known for the grand speeches that inspired epic poetry, but she is capable of turning a phrase. She’s whip smart, and in many ways is the power behind the throne. Her relationship with her husband is a complicated one, but seems to be built on actual love and affection. However, we can’t possibly know that, because in the same way Weiner wears his heart, brain, and presumably sexual organ on his sleeve, Huma keeps her emotions hidden. She’s the quiet, dignified type, the kind that remains mysterious throughout the entire tragedy. This is never fully explained in the film, but it’s easy enough to figure out. If your entire life were to be picked apart constantly due to who you know, who you married, if he truly loves you, if you truly love him, and on top of being put on television every single day for months on end, your husband (allegedly without asking you) decided to make a documentary, where you will be filled for all hours of your daily life, wouldn’t you try to keep as quiet as possible? Poor Huma is subjected to every sort of terrible treatment in the book: the media constantly assuming how she feels, telling her how she should feel, accusing her of being a terrible wife and mother, insulting her, calling her weak for choosing not to leave the man she loves, and, after all of this, is examined because her best friend declared that she should leave her husband. Her best friend. Named Hillary Clinton. Let that one sink in. So perhaps Huma deservers her privacy. And more importantly, she deserves for the media, and society, to back the hell off as she figures her own life out. In the end, while she may have the demeanor of Lady Macbeth, she is more of a kindred spirit to Medea, and perhaps more so Ophelia.

At one point, the filmmakers ask Weiner, “Why are you letting us film this?” And he doesn’t have a clear answer for them. And that’s sort of the point. We can’t know why he thought it was a good idea. We can’t know why he let it continue afterwards. There really isn’t a good, clear answer, other than his ego, and the fact that he was hoping to have some say in how he entered the history books.  And in a way, he did succeed. He will be remembered forever, but it will be in the same way we’ve immortalized characters from classic literature: to study the mistakes of the past, in order to avoid them in the future.