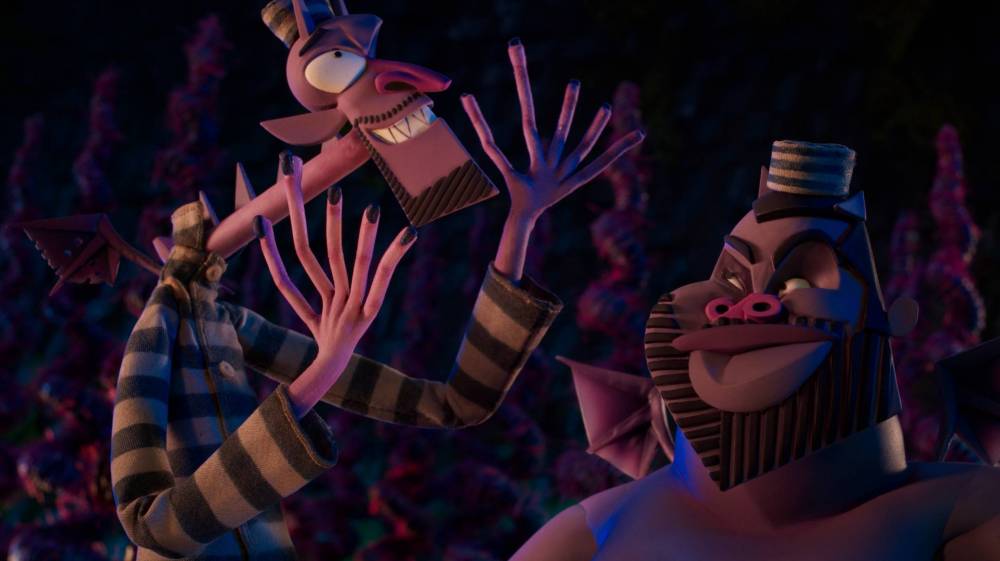 There’s something irresistible about watching a master of a craft doing what they do best. Whether or not it’s their best work, or the film leaves you wanting more, the sheer spectacle of the filmmaking enshrouds and overwhelms you, oftentimes leaving your jaw on the floor pondering what human creativity can accomplish. This is the experience watching the newest film by Henry Selick, the creator of The Nightmare Before Christmas and Coraline, released on Netflix this past weekend. Titled Wendell and Wild, and boasting a reunion between Keegan-Michael Key and cowriter Jordan Peele, Wendell & Wild becomes a bit muddled in its complicated story, but the central themes and Selick’s unparalleled visual eye more than compensate for any narrative shortcomings.

Kat Elliot (Lyric Ross) has spent her childhood bounced around from foster care to foster care ever since an accident that she caused took the lives of her parents. Given the option between jail or a Catholic school in her former hometown – now desolate thanks to the private prison company Klaxon Korp – Kat reluctantly returns home, where she’s taken under the wing of a kindly nun with a secret, Sister Helley (Angela Bassett). However, Kat soon finds herself in a complicated situation, as she is chosen by two bumbling demons, Wendell (Key) and Wild (Peele) to be their Hellmouth, offering to bring back her parents if she opens a portal for them to enter the Land of the Living. And so, Kat finds herself on a ghoul-filled quest to reunite with her parents – not to mention save the town from the evil Klaxons.

There’s certainly never a lack of interesting ideas at play inside Wendell & Wild’s 100-minute runtime. Selick uses his film’s ghoulish setup as a way to comment on a host of weighty topics, including guilt, trauma, and depression. These are the personal demons every human being finds themselves in battle with, ever haunted by the ghosts of the past. So why not make those demons literal demons? Selick presents these ideas in the façade of a macabre YA story, the kind teenagers read about on-the-run orphans with a special destiny. All the tropes are there: social outcast, secret powers, a hidden past, and over-the-top villains, and a cumbersome clique that harasses our heroine. Although, in delightful fashion, Selick breaks the mold by making the popular clique’s trait unrelenting kindness, a trait which irritates the loner Kat. These ideas, themes, and subversions all add to the film’s internal tapestry.

The issue, however, is not in the thematic nature of the story. Selick’s films have always benefited from their simplicity, an art which enhances the film’s visuals. Nightmare is about a Halloween skeleton who wants to change paths and become a Christmas skeleton. Coraline is about a lonely girl who learns to be careful what she wishes for. Wild should, generally speaking, be a simple film. A young girl who feels guilty has to confront the demons of her past – here literal demons. If that were the story, everything would be great. But the film also tries to balance stories about private prisons, a struggling town and a struggling Catholic school, a dogged detective trying to crack a years-old murder, a giant demon who runs an amusement park for the damned on his stomach, and beyond. None of the pieces fit neatly together, and whereas simplicity allows you to shrug off the silliness, Wendell & Wild leaves you to frantically and frustratingly assemble the puzzle that is its plot.

However, while the film’s narrative leaves something to be desired, it is admittedly difficult to notice or care so long as the animation remains this breathtaking. Every Henry Selick picture feels like a miracle, and Wendell & Wild is no exception. He continues to find new ways to evolve the craft – whereas Nightmare provided elegance and Coraline provided innovation, Wendell & Wild provides edginess, utilizing new and exciting ways of twirling and lifting the camera between stop-motion puppets in ways not seen before – and almost feel like cheating.

One sequence witnesses two ancient nuns playing the same accordion in matching rocking chairs whilst students are forced to write lines on opposite sides of a blackboard. Another utilizes shadow puppetry to demonstrate the way that the cycle of abuse is cyclical in nature. And throughout it all, each character is given a meticulous design equal parts creepy and adorable. I will forever be thinking of Sparky the Undead Robo Horse, a creation so cute he can guilt amoral demons out of murdering him. This is a truly stunning achievement from beginning to end, and each frame begs the question, “How the f*ck did they do this?”

The voice work here is pretty much standard fare for the genre, which serves as both a blessing and a curse. Gratefully, this means performers like Angela Bassett, Ving Rhames, and legendary actor James Hong give their all to a series of campy characters, while Lyric Ross gives a solid, serviceable lead performance. However, it also means feeling a little disappointed that Key and Peele aren’t as funny as desired in the titular roles. Oh, they’re entertaining, don’t get me wrong. But this is supposed to be their Beetlejuice, and they just never step up to the plate in the same way as, well, Michael Keaton – or even the similarly-sized roles for Catherine O’Hara, Paul Reubens, and Danny Elfman in Nightmare Before Christmas.

However, if there’s one actor I do want to shout out in this review, it’s young Sam Zelaya, who plays Kat’s reluctant compadre, trans student Raul. Zelaya gives the role a ‘fraidy cat edge and energetic jolt, overshadowing each and every costar – even seasoned pros – in the most fascinating and complicated role in the film. It’s an eye-catching performance, and one that should hopefully launch the young actor to bigger and better things.

Wendell & Wild is a textbook example of the ever-present struggle between the visual and narrative forms of filmmaking. The visual mastery constantly finds itself at odds with the film’s convoluted plot, in a battle to see which will be the determining factor of audience enjoyment. It is hard to deny my disappointment in the narrative and its varied inconsistencies. But at the end of the day, I find myself more often thinking about the animation, and the thematic material the film deals with. And my conclusion is that the world needs more magic and silliness like this.