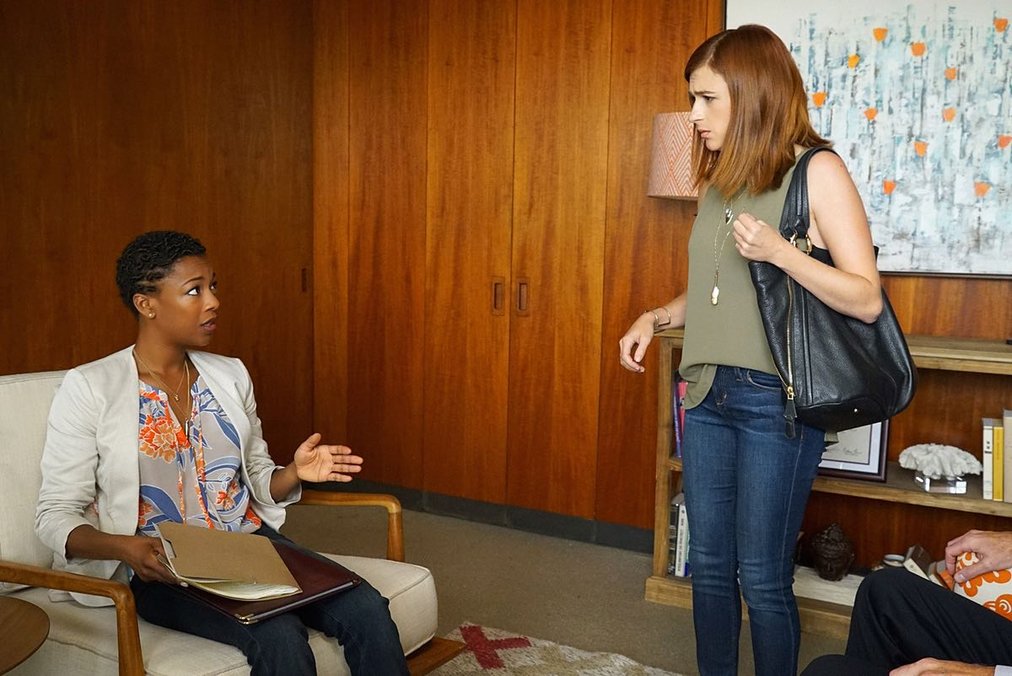 We are only two episodes in, but I don’t think it’s too soon to name You’re the Worst as one of the best shows of the year. Tonight, Gretchen (Aya Cash) begins her path to self-improvement, and while it’s going to be a slow, painful process, there’s hope there yet. She has finally met her therapist, Justina (played with a fiery passion by Orange is the New Black’s Samira Wiley, fitting in with the cast of rogues instantaneously), and if each episode is as interesting as tonight’s, there is nowhere for this show to go but up.

The episode opens as a drunk Jimmy (Chris Geere) declares the five most truly free moments of a man’s life, “in ascending order,” to a manually stimulating Gretchen, as well as a clearly uncomfortable Edgar (Desmin Borges) and Dorothy (Collette Wolfe): Moving out of your parents’ house, dumping a girl-hard, deciding to eat a whole pizza, hammocks, and finishing a writing project. Basically, it’s an over-the-top way of announcing to the room that he has finished his book proposal. Without missing a beat, Gretchen lays into him with the sarcasm, proving herself the queen of the one-liner. Unfortunately, Edgar makes the mistake of offering Jimmy some suggestions, leading to a full episode of Jimmy whining about how great his book is and how wrong Edgar is. To everyone. His narcissism knows no bounds. Meanwhile, Gretchen complains to Dorothy about her upcoming therapy session. As she sees it, “A Psychiatrist is like, ‘Here, take some pills, ho’ while a Therapist is like, ‘Tell me about your problems, I couldn’t make it as an actress.’” She also spends her time complaining about her chore of opening the mail, pointing out, “I already have one little chore. Awww, Jimmy’s d*ck, ya burnt!” (If you can’t already tell, I am in awe of this episodes one-liner-per-second ratio, and I will be sharing many of them). However, she is resigned to her fate, and heads off to her first session with Justina.

The therapy session begins as an already-exhausted Justina listens to Jimmy, not Gretchen, as he spends the hour trying to understand how Edgar could not like something about his book. Eventually, Justina forces him to quiet down while she talks to an unwilling Gretchen, who spends the entire scene trying to use every excuse she can to avoid the root cause of her problems (something depressing could be in the mail, it’s hinted). First, she claims that the medicine should just magically cure her without the need for therapy. When this feint fails, she calls therapy a scam and challenges Justina to a fight, an offer that is rejected. Finally, upon learning that the room is “judgment free” and that she can say anything she wants, Gretchen unleashes a litany of curse words so stunningly filthy, I’m not comfortable writing it here, both because it is so vile and because I cannot do justice to the absolute joy that Cash has delivering these lines. She storms out of the office, leaving Justina vocally regretting not accepting the offer to fight.

Meanwhile, our foursome reunites at their favorite diner for breakfast, each expressing a truth they refuse to accept, yet won’t stop talking about. Jimmy can’t accept Edgar’s notes, Gretchen can’t accept that the therapist might be able to help, Edgar starting to suffer the realities of life without his meds, and Lindsay (Kether Donahue, spending the entire episode in a nurse’s outfit) has convinced Paul (and herself) that he had simply backed into her knife, and that his agony is her fault. She’s suffering, though, because the first time we see the couple is watching Lindsay graphically cleanse his wound as he whines cloyingly (Paul was always annoying, but I’m a little irritated at how truly awful he’s become this season). At least this show has some level of human decency left, as Lindsay tells the table about what she’s done, and all three react with proper horror as she alternates between “accident” and “attempted murder.” Edgar then asks the group for help moving Dorothy into her new apartment, and we are reminded of why they are the worst, as the table remains silent. Eventually, Jimmy agrees-not because he wants to help a friend, but because he wants to explain why Edgar’s notes were so wrong. Gretchen and Lindsay decide to confront Justina, leaving Paul to toss DVDs like Frisbees at the player in order to watch a movie. It’s the best sight gag of the week.

Unfortunately, at the move in, the chipper Dorothy is forced to move everything in by herself. Jimmy is no help-he spends all his time complaining about Edgar’s notes to anyone who will listen, eventually forming a small crowd who will tell him about how great a writer he is. The description gets more ridiculous each and every time we hear about it, describing the sordid details that Jimmy’s twisted mind has put on paper. From what I can gather, the book is an erotic thriller, despite the fact Jimmy claims it is “high art.” However, there may be something below the surface that we don’t see, as one note is to “have the lead fall in love with the redhead, they deserve a happy ending,” and “too much sex.” At most, the book may contain more autobiographical notes than Jimmy realizes, and at least it’s a good comment on the show itself. Edgar, however, has a darker quest, even if it is drenched in comedy. Seeing a group of homeless camped out next to the apartment, Edgar heads out to speak with them, and to help them write better signs. Combining his own knowledge of the streets with his improv “skills,” he helps them write better, funnier signs to get attention, making jokes about cookies (as opposed to their request of “demon rape.”). When Dorothy comes out to check on him, he states that their needs were more important than hers. She manages to compromise with him to regain his attention, but it’s clear that there’s a fight and a fall coming for the healthiest couple on the show, and it won’t be pretty. Edgar’s got a rough upcoming few months.

Meanwhile, Gretchen bursts into a session between Justina and another client, only to be kicked out. Not used to lacking control, Gretchen is stunned. Justina is in full control, much to Gretchen’s chagrin-and somewhat, her arousal. But she doesn’t want Justina (or “Mommy,” as Gretchen desperately calls her) to know this, and accuses the therapist of putting all the blame on her (she goes as far as to accuse the poor woman of being akin to a “rape apologist”). Yet Justina continues to take it, and leaves Gretchen to continue to fume. She plans on “Carrie” the woman, but after discovering the price of pig’s blood, settles on egging her house with Lindsay. However, the two troublemakers get caught and confronted by Justina, who helps Gretchen understand that being vulnerable makes her angry and that, eventually, a person has to take responsibility, before mocking the two and walking off. Gretchen is floored, and Lindsay is aroused. Yet both women learn their lesson (sort of). Lindsay goes home and apologizes to Paul for ignoring his pain (while causing him pain), while Gretchen ponders how she can claim responsibility for her own life.

In the final moments of the show, Jimmy and Gretchen try fooling around, but find that they can’t focus due to their respective problems. They decide to confront them simultaneously: Jimmy will call his agent and tell him the book isn’t ready and needs rewrites, while Gretchen unleashes her angst while opening the mail. And this is when the show plays its cards. Gretchen begins overcoming her fear of the mail, mocking all the bills she refuses to pay and throwing away the magazine subscriptions in the pile. And then she comes across an old letter from England. It’s for Jimmy, from his sister. A newspaper article with a Post-It note, reading: “Shitty Jimmy, Dad’s dead. Sorry.” Gretchen is traumatized-Jimmy hasn’t spoken to his family in months (since one of the more painful episodes of Season 2). She goes to tell Jimmy, but before she gets a chance, an elated Jimmy announces that the book has been optioned. He leaves the room to grab more scotch as Gretchen stares sadly into the camera, incapable of moving or speaking.

It’s a painful ending to a great episode of the show. Last week, Stephen Falk set a great table, and it’s clear that he knows exactly how he wants the dinner party play out. While there’s no clear idea on how to handle Paul, the expertise of deft writing and the performances of Cash, Geere, Borges, Donahue, and especially newcomer Wiley prove that the show is going to hand out the laughs and the tears by the bucket as the season goes on.

Tags: Fix Me Dummy, Recap, You're the Worst