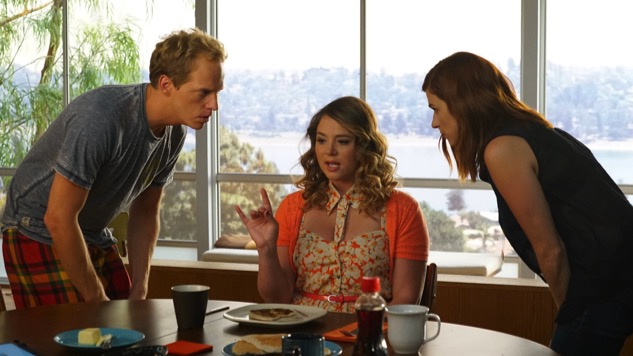 One of the greatest things about You’re the Worst is the way it can take a serious event in a human’s life and study it by throwing two horrible, maladjusted people smack dab in the middle of it. First it was love, then it was depression, and now the show sets its sights on grief. Walking the balancing act between “actual statement” and “humor at the horribleness” requires delicacy, and while last night’s episode “Men Get Strong” struggles to get that balance just right, it’s still one of their best yet this season, filled with humor and nihilism.

The episode opens the morning after Gretchen (Aya Cash) tells Jimmy (Chris Geere) that his dad passed away. She lies in bed quietly, waiting for him to show any sign that he is emotionally ready to wake up and talk. She is shocked, however, to find that he is perfectly fine-he’d forgotten the night in a blackout (which worries Gretchen in a different way”). Gretchen breaks the news to him again, and Jimmy is once again left numb, leaving Gretchen to avoid talking about emotions with sex. Seven minutes later, Gretchen finishes, and asks if Jimmy is ready to talk. As it turns out, Jimmy’s just acting-he knew if he faked it he could get “free sex”-obviously not grasping the concept of a relationship, as Gretchen points out. However, Jimmy tells her he feels nothing over his estranged father’s death, and Gretchen is relieved. They head upstairs, where Edgar (Desmin Borges) has made everyone pancakes to distract himself from having to deal with his upcoming meeting with his V.A. instructor. Jimmy decides this is the perfect time to mock Edgar, informing him that he’d recently read that “In World War I, PTSD was called ‘cowardice,’ and the penalty was to be shot.” Jimmy laughs at his own comment, clearly missing that this one hurt Edgar more than usual-clearly the lack of meds is making him worse. Lindsay (Kether Donahue), meanwhile, starts to connect the dots over her potential road to becoming Jimmy’s dad, and realizes she needs to be a good mother, while Jimmy and Gretchen watch her intently as she has a rational thought for the first time in the show’s history. Jimmy and Gretchen leave for the day as he gives Edgar a long list of British writing snacks to bring him, delivered in Geere’s usual ridiculous patter delivery.

Gretchen hunts down her therapist Justina (Samira Wiley), who reacts to her presence with a hilarious “Oh sh*t,”-apparently a few short weeks is all that this trained psychiatrist can handle of Gretchen’s behavior before becoming alarmed and disturbed by her presence. Gretchen points out that Jimmy handled his grief like a real man, but Justina is much smarter than that. Ever the voice of reason, she warns Gretchen that a breakdown is coming, and “You’re gonna have to be there for him.” Gretchen laughs this off, but is then horrified to realize that this breakdown could happen on her anticipated Famous Animals of Instagram Cruise. She decides that the only hope is to speed along the grieving process so it won’t happen further down the road. Justina warns that grief “Is not gonna happen on your schedule,” but it takes Gretchen all of two seconds to announce, “Nah, I’m still gonna do it my way.” She finds Jimmy lying on his floor, dictating his smut novel to poor Killian (Shane Francis Smith) while Edgar sweeps. Jimmy, annoyed at the interruptions, calls his girlfriend “maladroit, no offense,” which is greeted by Gretchen with “None taken, because I do not know that word.” She then launches into her plan to drag Jimmy around to sad places, in order to force him to “poop out some tears.” Jimmy decides to follow her lead, leaving instructions for Killian to clean up the house and copy edit his book. “And for the love of God, learn how to spell analingus.”

Meanwhile, in a quest to become a good mother, Lindsay has dragged injured husband Paul (Allan McLeod) to a parenthood training class. Paul points out they don’t need practice because, “We’re already a family.” Lindsay retorts by asking him to “name one family with only two people.” Under his breath, it takes Paul less than a second to respond “the Gilmore Girls.” They run into Becca (Janet Varney) and Vernon (thank God for Todd Robert Anderson), who are determined to be the best parents ever. Well, Becca is, because that’s how she’s wired. Vernon wants Paul to go into the bathroom and get plastered with him. Meanwhile, back with our main couple, Jimmy finishes explaining to Gretchen why he is better off having no emotions: emotionless characters like Robocop and Chappie (all robots, as Gretchen points out) survive, while emotional characters like Kane from Citizen Kane and the wife from Up end up dead. Edgar is already annoyed by this conversation, and kicks them out of the car, promising to come back after his V.A. meeting. The first stop for Jimmy and Gretchen on their quest to Make Jimmy Cry is to crash a funeral. Unfortunately, Gretchen realizes everyone at the funeral is hot (she is turned on by funerals, we learn), and Jimmy realizes the same thing-they end up having sex in a nearby mausoleum, with Gretchen announcing, “You’re gonna have to pull out. I can’t get pregnant-your dad is currently floating around looking for a body to reincarnate!”

Back at the childrearing class, things take a surprising turn-Lindsay is far and away the best student in the class, showing real aptitude every step of the way as Becca looks on jealously and Vernon gets wasted off of Baby Bottle Booze and attaches breast pumps to his nipples. Everyone congratulates Lindsay on how great she is at being a mother. Unfortunately, that’s the exact opposite of what Lindsay needs to hear. She begins to panic, and as Paul begins to look around, she helps a handsome dad shop for baby supplies. If you know anything about Lindsay, you have a pretty good idea of where this is going. Meanwhile, Gretchen has taken Jimmy to a mug painting Father-Son store, hoping to inspire some “Cats in the Cradle sh*t.” However, this just makes Jimmy angry, for despite his “wide variety of creative skills,” he is only capable of painting a sun wearing sunglasses. “What, is he too bright for his own eyes?” he asks. However, Gretchen has a brainstorm when she sees a father yelling at his kid in the middle of the store. She sends Jimmy out to talk to the man while she talks to the kid. Jimmy confronts the dad over his behavior (and inadvertently reveals he broke a blood vessel in his eye crying during My Girl), only to learn that the man is, in fact, being bullied and controlled by his god-awful son. The boy then comes outside with a highly amused Gretchen and unleashes a litany of curse words, much to his father’s horror and Gretchen and Jimmy’s amusement. The two walk off, despite the man’s pleas for salvation, and decide to call Edgar for a new ride. Edgar claims that his car broke down, so he can’t pick them up or bring them their booze. An enraged Jimmy texts Edgar “Zero Stars,” as if his friend were an Uber driver, and we learn that Edgar never went to his V.A. meeting, instead sitting on the beach getting hammered. He’s not in a good place, you guys.

As a last ditch effort, Gretchen decides to roleplay as Jimmy’s dad at a local pub. She unleashes a stream of insults-with perfect British slang-until Jimmy snaps and begins shouting back at her. Gretchen watches with glee as Jimmy’s emotions build up-only to be released in a fart. He’s still emotionally stunted in that regard. Meanwhile, Lindsay has a heart to heart with her new friend as they discuss the frightening nature of approaching parenthood. “What if there’s something I’m meant to be good at and I never find out?” she asks. The man relays that feeling, and talks about how he’s been given a second chance at love and fatherhood. It seems these two have a real connection. So, naturally, Lindsay tries to kiss the guy. Who loudly and angrily rebuffs her, pointing out that he had just told her that he was getting a second chance in life, that her husband was only steps away, and that she was trying to throw away both their lives. A humiliated and horrified Lindsay rushes out of the building, dropping her prize-and symbolically, her hope at being a good mother.

Gretchen and Jimmy arrive home, having accepted that Jimmy doesn’t have any emotions to unleash. Edgar sits at the counter eating Jimmy’s snacks, and Gretchen, sensing something might be wrong, asks Edgar if he wants to talk about his meeting. He tells her no, but with an extra, un-Edgarlike amount of snark. However, a lack of responsibility is all Gretchen is looking for, so she considers this a win in her book, and goes down to talk to Jimmy. However, she finds him sitting on his bed, surrounded by his dad’s stuff. She goes to comfort him, but discovers he is smiling and laughing. Instead of feeling sad or depressed over the death, Jimmy is truly “relieved”-he is free of the pain his dad caused him throughout his life. He takes all of his father’s stuff and shoves it in a drawer to throw away later. Gretchen seems to be happy he has figured out his emotions, but there’s a pain in her eyes, as she considers how joyful Jimmy seems over this news. The two head upstairs to watch TV, and the camera lingers as the Dad Drawer pops back open. I wonder if that’s symbolic.

What a unique way to deal with grief. It was dark, it was tragic, and it was amusing all at the same time. While I found the ending a little rushed, I was glad they rejected the typical route of storytelling, even if only for the near future. The way this show tackles human emotions is unique and brilliant, and we need more just like it.

Tags: Chris Geere, Men Get Strong, Recap, You're the Worst