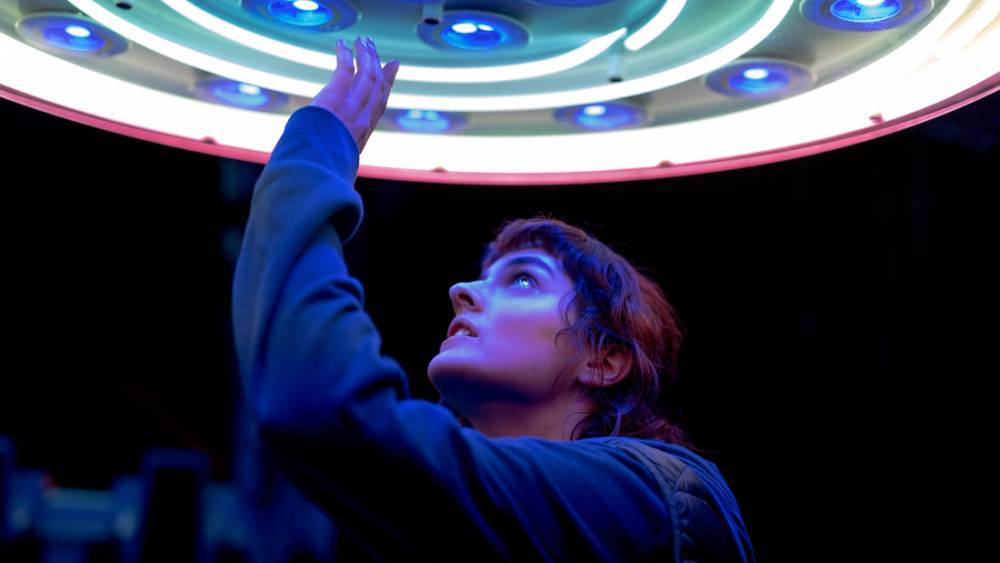 Every once in a while, there’s a film that begs the question: is an idea enough to carry a film? Because sometimes, a film’s core conceit and metaphor fall completely flat, but the execution is so entertaining, you’re willing to overlook it. Such is the case with Jumbo, a film by French director Zoé Wittock that tries to tell a “deep” story about a woman’s struggle to feel normal and her relationship with a judgmental mother. In terms of these themes, the film falls completely flat; however, the way in which it presents these themes is so marvelously bananas that I ultimately ended up, at the end of the day, enjoying the ride, so to speak.

Jeanne Tantoi (Noémie Merlant) struggles to fit in. After being abandoned by her father, Jeanne spends her days working in the local amusement park, and her nights tinkering with a series of inventions. She has no time for romance or lovers, much to the chagrin and confusion of her mother, Margarette (Emmanuelle Bercot), who is trying to reclaim herself in the aftermath of her husband’s abandonment. However, Jeanne may have finally found a way to merge all of her passions when she finds a love that understands her, fulfills her needs, and supports her passion for tinkering and machinery: the park’s newest roller coaster attraction, Jumbo.

The first 30 minutes of Jumbo were bit of an emotional roller coaster for me, so to speak. There were some interesting visuals on display that had me intrigued – glimpses of freedom as a mother and daughter drive down the highway at top speed, singing along to “Fly” by Medieval. It’s interesting filmmaking that grabs your attention immediately. But almost immediately after this opening promise, the film shifted into…more wrongheaded territory. Almost every line and ever scene was a means of symbolism – and heavy-handed symbolism at that. She’s different, you see. She’s an inventor, who likes to build things, and only feels alive on roller coasters. Suddenly the film that showed immediate promise seemed much more dull. Suddenly a story that could have been about a person’s inability to connect, or a metaphor for STEM is a bland story about wanting rides to “take her away.” It’s the same story of loneliness and feeling like an outsider we’ve seen thousands of times in independent cinema, and at the 30 minute mark, I almost turned it off. “I have better uses for my time,” I thought. “This film’s gonna need to do something really interesting to get my attention back.

And then the roller coaster comes to life. And I don’t just mean in a metaphorical sense. I mean the roller coast comes to life, rescues her from falling, and “talks back to her.” And suddenly, Wittock had breathed life into what otherwise could have been a boring Sundance schmaltz fest. I cannot stress enough how much this decision, and the filmmaking surrounding the decision, breathe life into an otherwise-lifeless film. Merlant plays Jeanne with so much affection during these moments, playing the love straight and finding much more devilish glee in the storytelling. She introduces her mother to her new partner with a casual, “Mom, meet my boyfriend. The roller coaster.” And when her mother doesn’t approve (shocker), she turns into a sullen teen girl. “She doesn’t get our love.

Wittock’s filmmaking here is extraordinary, as the effects bringing Jumbo to life are sumptuous, from the cinematography to the sound design creating the “voice.” And Wittock isn’t afraid to take the metaphor into shockingly realistic worlds – after they “fool around,” Jeanne is shown with oil all over her face and dress. Is this a dirty joke of sorts? Boy, I hope so – that’s a wicked sense of humor if so. And even within this naughtiness and weirdness, there’s a sense of sweetness. You believe Jeanne as she makes declarations like “He makes me feel the things you want me to feel with boys,” and when she tearfully (and nakedly) apologizes to Jumbo after “cheating,” there’s a strong sense of emotion lesser directors would kill for. Wittock slipped a Her/Under the Skin style fable into a stereotypical Sundance schlockfest, and in the moments it breaks from tradition, the film really sings.

Sadly, despite the wonder in the roller coaster romance sequences, whenever we’re away from Jumbo, the film shifts back to its boring family drama gobbledygook. Wittlock is an assured director, and does her best to breathe life into scenes of stereotypical family drama, like Margarette smashing Jeanne’s things out of “love,” or Margarette’s series of dalliances in order to move on from her abandonment. However, there’s only so much any director could do with such a flaccid script – a phrase I’d never thought I’d use for a film about roller coaster f*cking. The film wants us to focus on the women and their struggles with love – it’s clear from the family patriarch leaving and, well, the roller-coaster affair that these women have issues with men and love. And occasionally, this is interesting, like a blurred mirror shot showing that human intimacy doesn’t suit Jeanne’s nature. But ultimately, the more the film doubles down on clichés and heavy-handedness, the more my mind began to wander towards more interesting interpretations.

As the film beat in for the umpteenth time that Jeanne has issues with male affection because her dad left, and that Margarette doesn’t like her daughter dating a machine, I began to wonder. “Is Margarette so upset because of her own failed relationship with the dad? Wait, is the dad a coaster? IS THAT WHY SHE CAN SPEAK COASTER AND BLEED OIL?!?” And the more bored I became, the more I gave weight to sequences that probably didn’t need elevating beyond “plot contrivance,” like the boss who sold Jumbo that may or may not have been doing so because of rejection by Jeanne; or the weirdly empowering (at least in my mind) when Jeanne rejected her mother’s affections after her betrayal. We probably should feel more empathy for Margarette in this moment (her daughter is dating a piece of metal, after all), but honestly? The script makes her such a cold, unlikable character, I have no choice but to root for her emotional shunning.

As for the acting, I suppose every actor does a decent enough job. Really the only actor with heavy lifting, so to speak, is Merlant, and she’s a real delight in the role. I’ve heard she’s incredible in Portrait of a Lady on Fire, which I still have yet to see, but her performance here is impressive in its own right. Her scenes opposite other humans are well acted, capturing her discomfort and malaise well, but when Merlant is required to not just act out, but sell a romantic relationship with a roller coast, my God does she sell it. The movie hinges on that bond, and she performs her job amiably. As for Bercot, I’ll give her credit: she makes a complicated role interesting. I certainly empathized with her plight, but I ultimately hated her character. If that was Bercat’s mission, great! If not, that’s certainly a problem with her performance. As for now, I’ll air on the side of caution and consider it a win. Bastien Bouillon is appropriately dickish as Jeanne’s creepy boss. And in a grand show of supporting work, Sam Louwyck’s Hubert, Jeanne’s eventual step-father, is a genuinely good dude. He brings a pleasant presence to the film, and I give him props for just sitting back and letting the action play out, only shining when called upon. More actors could learn from him.

Jumbo probably could have been a great short film. It has some fascinating thoughts on male-less love, and demonstrates its theme that “Love is overpowering” by culminating in a marriage to a roller coaster. But it’s too caught up in its own Sundance-iness. I give Jumbo a slight pass because Wittlock is an impressive director, and because the sequences of roller coaster romance are sweet and daring and funny all at the same time. But I suggest that in the future, Wittlock double down on her inner weirdo. Because when she sticks to the mundane…good Lord is it uninteresting. And that’s not a conclusion I thought I’d come to in a film where a girl hooks up with a roller coaster.

Jumbo is now available on VOD