Kroll and Mulaney’s ‘Oh, Hello’ To Open On Broadway 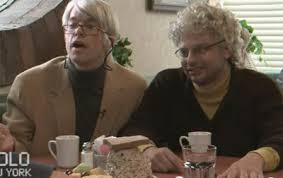 Broadway is about to become a whole lot more Unclean and Ice-T obsessed with the news that Oh, Hello is opening this fall.

Written by and starring Nick Kroll and John Mulaney, the play is the two-man “memoir for the stage” of their most popular characters, Gil Faizon and George St. Geegland, a pair of opinionated, divorced New York 70 year olds. Honed over the course of a decade, Gil and George have appeared in many off-Broadway shows and sketches (mostly The Kroll Show), and have finally made their way to The Great White Way. I absolutely adore both of these comedians. Nick Kroll’s Ruxin was one of the darkest misanthropes on television, always elevating The League, and considering he also plays a major role in Oscar contender Loving later this year, it seems he’ll have quite the fall on his hands. Mulaney, meanwhile, is one of my all-time favorite comedians, with two beloved stand-up specials and creating the role of Stefon on Saturday Night Live. Even though his television show failed, I still look forward to any work he comes out with. Combined with direction by Alex Timbers (Bloody Bloody Andrew Jackson, Rocky, Peter and the Starcatchers), this seems like a must-see for anyone heading to New York from September 23 through January 8th.

You can watch one of the Oh, Hello sketches below.