While the first half of 2017 may have seemed male-oriented, especially when compared to last year’s swarm of phenomenal female performances, that’s a bit misleading. Sure, most of the best films so far have starred men, but let’s not forget that the biggest hit of the year was a woman’s vehicle. Not only that, a higher percentage of the great films were directed by women, including major Oscar contender Detroit. And let’s not forget that the back of this year is more stacked than any year in recent memory. Sight unseen, we may be approaching one of the strongest years for women in recent memory. 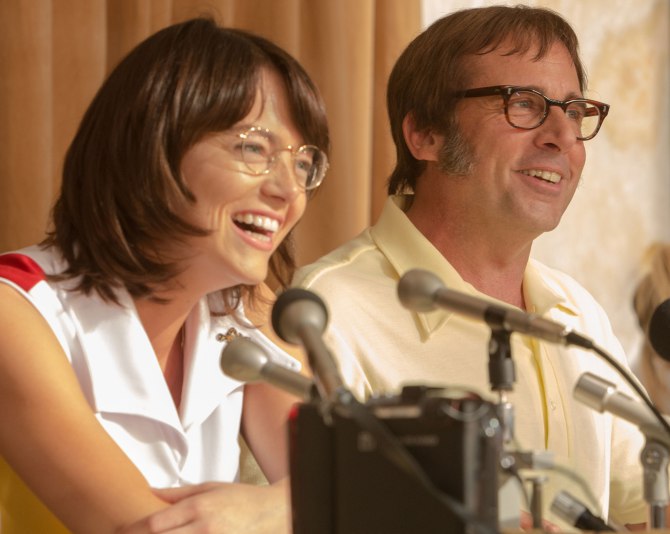 Emma Stone in Battle of the Sexes

Last year, we saw so many great performances by women, the two best performances of the year went unrecognized by the Academy: Amy Adams in Arrival and Annette Bening in 20th Century Women. Overall, I went 2/5 in my July predictions; however, on the bright side, I did call Emma Stone winning Best Actress a full month before anyone even considered her a contender. Yay me. This year, I will double down on my Stone-love and predict that she will receive a nomination for playing Billie Jean King in Battle of the Sexes. The film has a lot working in its favor: it’s a true story, it balances comedy and drama, Stone is fresh off an Oscar and in the best position to rack up another nod, and with a story about women standing up to a chauvinist, it should strike a chord with people finding it timely. Now, the film could be a dud, or too commercial for the Academy, but Dayton and Faris usually draw strong performances out of their actors (Little Miss Sunshine took home Best Supporting Actor in 2006), and I think that, if nothing else, Stone will receive her third Oscar nomination.

They’ll literally nominate me for f*cking anything

Speaking of last year, I made a fatal error in my predictions: I underestimated Meryl Streep. Never underestimate Meryl Streep. Even the people who don’t like her admit she’s a national treasure. I’m not sure she deserved all 20 of her Oscar nominations (she certainly didn’t deserve a nod for The Iron Lady, and she didn’t necessarily need one for Florence Foster Jenkins), but the fact she has them indicates that the Academy loves her and will nominate her for anything (well, maybe not Mamma Mia!). She will be starring in the new Steven Spielberg film (ding) as a famous newspaper publisher (ding ding) about the press standing up to the president (ding ding ding ding ding ding ding). I’m not convinced that Streep will win, but with all of that in her corner, you can go to Vegas now and bet on her receiving an astonishing 21st Academy Award nomination.

Annette Bening, smiling through the pain of being ignored by the Academy

Unfortunately, while I can easily name these two as likely nominees, I run into a troubling position moving up the totem pole. You see, at the moment, there is no frontrunner for the award. There’s no one like Gary Oldman this year for Best Actor, or like Casey Affleck vs. Denzel Washington and Emma Stone last year. The reason this is challenging is that it makes it difficult to round out a Top Five when there’s no one to set the bar. Which means I’m going to have to turn towards history. In 2014, there wasn’t a frontrunner, and it ended up resulting in a terrible performance by a great actress in a rushed film cutting through the field to finally reward a long-overdue icon. I refer, of course, to Julianne Moore filming and releasing Still Alice at the end of the year to take advantage of the lack of strong female roles. Therefore, I will turn to a field of veterans who each have a film at Toronto in the hopes of Moore-ing it and winning their first (or second) Oscar. I’ve looked at Jessica Chastain for Molly’s Game, but that looks like a potential bomb. Frances McDormand looks great in Three Billboards Outside of Ebbing, Missouri, but that looks a bit too off-putting for the Academy, as all of McDonagh’s films have up to this point. Last year nominee Isabelle Huppert is working with the Academy Award-nominated Michael Haneke in a sequel to Amour (huh?), but her performance didn’t receive much buzz out of Cannes. And Michelle Pfeiffer has had Where Is Kyra? in the can for a year now, just waiting for the opportunity to return to the field. However, I think she’ll be a stronger contender in the Supporting field (come back on Thursday for that). Which leaves us with the Queen of the Overdue, coming off her biggest snub yet, Annette Bening. Bening broke hearts in last year’s 20th Century Women, and arguably should have won Best Actress, and yet she was left unnominated. That would be egregious in and of itself, but when you couple that with the fact she has never won an Oscar despite a legendary career, you start to build a narrative. Bening will be playing legendary actress Gloria Grahame in Films Stars Don’t Die in Liverpool, and people have been quick to note the comparisons in Sony’s release schedule to that of Still Alice. I’m not sold on Bening being nominated just yet, so I won’t declare her the frontrunner, but make no mistake: in such a weak year, if Bening is even half as good as she normally is, this could be the performance to watch out for. 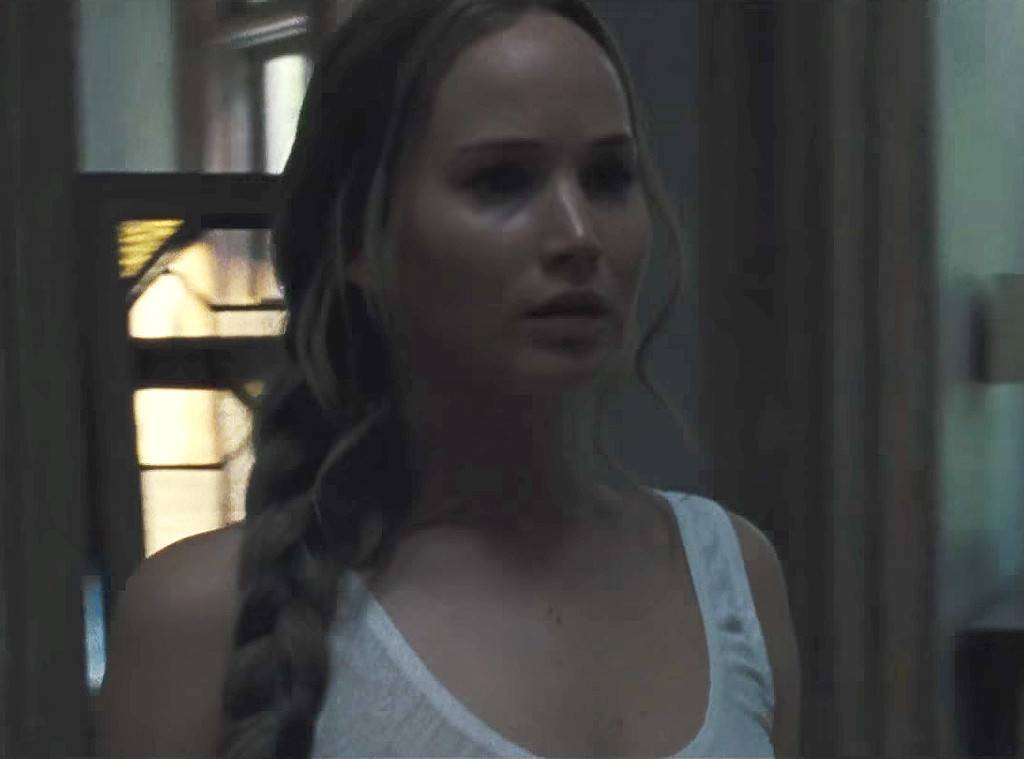 This leaves us with the two top spots remaining. I can go several ways with these two spots. I can pick a major contender from the first half of the year, like Diane Kruger in In the Fade or Salma Hayek in Beatriz at Dinner. It could be a former winner, such as Nicole Kidman in The Beguiled or The Killing of a Sacred Deer, or Brie Larson in The Glass Castle (unlikely based on early reviews, but you never know with the Academy). They could go with an audience favorite, like Zoe Kazan in The Big Sick or Gal Gadot in Wonder Woman (God, if only). However, if there is one thing the Academy loves, it’s an ingénue. If you look at the past ten years, six of them were under forty, and four were under thirty. They like young women who make them feel young at heart, and remind them of Vivien Leigh and Audrey Hepburn. There are several actresses who could fall into this category. If it comes out this year, Margot Robbie could finally earn some love for I, Tonya. Claire Foy could turn her love from The Crown into an Oscar nod for Breathe. On the younger side of things (because the Academy Awards tend to favor teen girls more than teen boys), Millicent Simmons has received raves for the understated Wonderstruck, and could push through. And Rooney Mara is not only an Academy favorite, but she has three great performances that could earn love, for Una, A Ghost Story, and the Academy-friendly Mary Magdelene. However, I’m going to give the edge to two of the greatest young actresses working right now, two of my all-time favorites who are working in exciting, Academy-friendly movies. I’m referring, of course, to Jennifer Lawrence and Carey Mulligan. Lawrence stole our hearts in Winter’s Bone and Silver Linings Playbook, and has since turned into the new Amy Adams/Meryl Streep, earning a shocking four Oscar nominations and one win before she turned thirty. She is working with Darren Aronofsky on a classic thriller, and as the “victim” in such a film, she has the best chance at an Oscar nomination. Aronofsky alternates earning Oscar nominations every other film, and his last thriller earned Natalie Portman a Best Actress Oscar. He’s due for another acting nomination, and if the film is as good as those first trailers indicate, I wouldn’t be shocked to hear Lawrence’s name that Thursday morning. Meanwhile, Mulligan is one of the best actresses around right now, period. After breaking through in the wonderful An Education and earning a Best Actress nomination, she has wowed us time and time again in a series of great performances, from Drive to Shame to Inside Llewyn Davis to The Great Gatsby. In Mudbound, Mulligan will be playing the central character. While her character isn’t necessarily the most important to the plot, it does revolve around here. It’s been years since we’ve seen such a role receive a nomination, as they were all the rage in The English Patient and Out of Africa, but as Mulligan is long-overdue for a second nomination, I think she will return to the Dolby this year. At the moment, I give Lawrence the edge as the frontrunner, if only because I need someone as a placeholder, but I do have confidence that this will be the Top Five.

Because this is an apparently weak year for Best Actress, it is entirely possible that I am wrong about any number of these predictions. There are many great actresses who could sneak in to receive a nomination – and perhaps even win. Early word on the street is that Kate Winslet has given her best performance yet in Wonder Wheel. Judi Dench has never received an Oscar for Best Actress, and history shows that Stephen Frears does well with older performers. And while fantasy has traditionally never done well in the acting categories, Sally Hawkins is one of the most underrated actresses alive, and she could definitely sneak in for The Shape of Water. We’ll have a better idea of the race after Venice and Toronto in a few weeks. Until then, you can see my full list of Best Actress contenders here, and you can see the Top Five below.