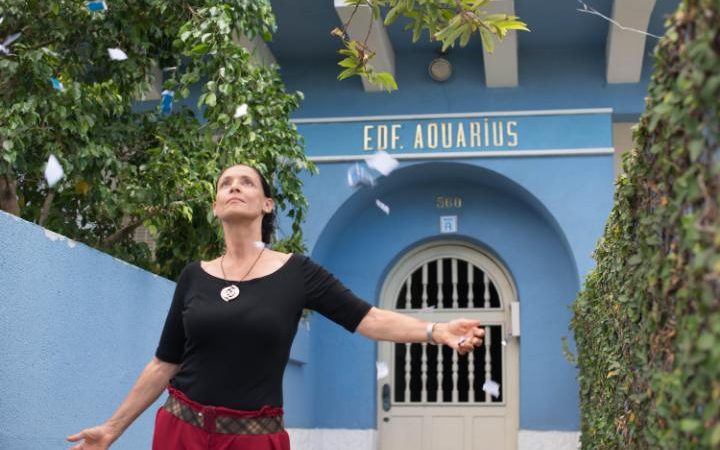 It’s very odd that saying a novel “reads like a movie” is deemed a compliment while a movie that “feels like a novel” is usually an insult. You’d think something going for a higher level of size and scope would be a compliment for a medium often looked down upon as “schmaltzy.” However, while I don’t agree with the difference, I can begin to understand it a bit more after viewing Aquarius, an original film that feels like it comes from a rich novel, and one that writer/director Kleber Mendonça Filho refused to cut anything out of. Because while the film is filled with great performances and rich satire (some of which I don’t fully comprehend because I’m not Brazilian), it also goes on longer than its own good, building and building to an underwhelming conclusion, and never fully justifying the length.

Dona Clara (Sônia Braga) has lived a full life. She’s given birth to several beautiful children, survived breast cancer, survived her beloved husband, become a successful (and retired) music writer, and art collector. She has determined to live out the rest of her exciting days in her beloved Aquarius apartment building. However, a group of developers desire to buy her out, and when she rejects their numerous offers, the chief-developer, Diego (Humberto Carrão) begins a campaign of harassment and sabotage in an attempt to force her out.

Before we discuss any more about the film, we need a small international politics lesson. Sorry, but it is necessary to fully understand what this film is going for. Over the course of the past year and a half, an effort by Brazil’s more conservative political party to remove President Dilma Rousseff for allegedly breaking budgetary laws (the extent of her actions has been considered debatable at best by most political scholars) has finally proven successful. It was an action considered highly controversial, and in many ways inspired the film Aquarius. It makes the film read as a political satire, as a strong, powerful woman stands her own against sabotage attempts from a powerful businessman, and demonstrates the lofty heights that Filho strived for in making it. It also shows why the film is highly controversial, and why international studios had to step in to save the film from the boycotts, protests and government attempts to tarnish the film’s reputation.

Now that the overall themes of the film are understood, let’s discuss how they play out. The film is, in essence, a character study of Dona Clara, and in its absolute richness, the film is a triumph. We are treated to two hours and twenty minutes of intimate detail on Clara’s life, from her days as a young woman, complete with flashbacks to the life of her aunt, to present-day sexagenarian Clara in all her bohemian glory. We follow her in both micro moments, like her friendships, struggle with breast cancer, and her sex life, to macro actions, like her interactions with class, poverty, art, sexuality, and aging. It’s such a sweeping canvas of minor details that make up one massive story, it’s almost awe-inspiring to watch. Every moment feels like a glimpse into a real woman’s life across several decades, and it feels breathtaking each time. One moment shows Clara staring at her topless reflection in the mirror and reflecting on her mastectomy, and it never feels exploitative. Another sequence features Braga dancing to “Fat Bottomed Girls” by Queen, and it feels like an absolute revelation. These are the moments that make Aquarius shine.

However, the problem with the film is its weight, and it is here where the novel argument stands out. In a novel, plots take detours, where worlds are built and extended sequences play out to build metaphors and themes. It’s the best part of the literary field. On film, it feels a little too detailed and rich for the audience-a sequence where the aunt reminisces about losing her virginity on top of her beloved cabinet is great for world-building, and is a great sequence in a novel. However, it doesn’t really add anything to the character of Clara, nor does it add anything to the political subtext. Furthermore, the side tracks and more mundane moments don’t just feel extraneous-they slow down the actual plot. It actually makes the film feel like a chore to watch at times, and that shouldn’t be the case in a film with this rich of themes and this great a main character. It starts to drag and drag until the finale, which may be the biggest letdown of the entire film. I’m not one to bash films where nothing is resolved-life has no resolutions, and I like it better when my films don’t resolve either. But there still has to be something that happens-Aquarius builds to a climax, but instead feels like it ends right before the climax occurs, or perhaps even during. It’s an odd choice, and one that hurts the overall effect of the film, leaving the audience feeling confused instead of inspired or depressed (whichever the intention is supposed to be). I just wish that Filma had either ended the film sooner or dragged it out a little more, in order to properly craft an ending suitable to such a story.

Overall, Aquarius is sort of a mixed bag. It’s definitely a film worth seeing, due to its rich subtext and fantastic main character. However, it’s one I recommend hesitantly, as the side ventures and weird ending tarnish its reputation. It’s a film that needed a sharper editor, or the foresight to be written as a novel instead. This is a book I would be passionate to buy; instead, it’s a film that I kind of shrug and say “I guess it’s worth a rental.”