‘Army Of One’ Review 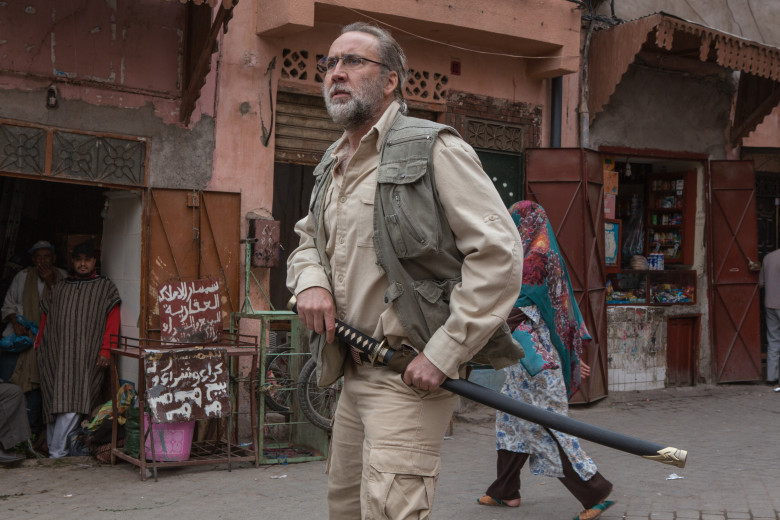 Don’t laugh: I love Nicolas Cage. I don’t mean this in the ironic millennial “I love how crazy Nic Cage is” way, where they’ve only seen National Treasure and The Wicker Man (and only the “Not the bees” scene at that) and think he’s great in a bad way. No, I mean I legitimately think Nicolas Cage is one of the greatest actors who has ever lived. This sounds blasphemous coming from a film critic, and I dare say it may have just turned several of you off, but it’s true. From 1982 to 2002, Nicolas Cage was, in my opinion, one of the greats. He had a niche, playing otherwise-unsympathetic sociopaths and finding the playful humanity in them.

Essentially, think about what Benedict Cumberbatch is doing on Sherlock, and apply it to an everyday individual, and that’s Cage’s forte. His characters were big, brash, eccentric, and overly excited, but they had this humanity in them that made you root for them, no matter how twisted they are. Now, after 2002, he started taking more roles in order to pay off his massive bankruptcy debts, and I’ll admit these films of descending talent have diminished his star status, but I still believe that the man of great stature is in there. And I’ve never been more certain of that than after watching Army of One, a film that would have been a disaster if not for Cage’s fascinating talents with character development.

Based on a true story, Gary Faulkner (Cage) was a true patriot. He loved America, he loved his fellow people, and he loved his girlfriend, Marci (Wendi McLendon-Covey). Out of work and on dialysis, Faulkner was visited by God (Russell Brand), who informed him that he had been chosen to travel to Pakistan in order to capture Osama bin Laden. With no prior training, no knowledge of any country or culture outside his own, and no weapons other than his trusty samurai sword, Faulkner sets out on a quest to accomplish his mission and make his country and Lord proud, in that order.

I know what you’re thinking, and no, I didn’t make a typo. This film is based on a true story, or at least it is for the most part. You see, Gary Faulkner is a real man, who really does look slightly crazed but insanely friendly, and in 2010, he really was found in Pakistan with a samurai sword looking to capture Osama bin Laden, claiming that God gave him the mission. The rest we have to intuit from the stories he tells. And that’s why this film works: it constantly knows that these stories are absurd and unrealistic, and uses that to filter it through Gary’s perspective, leaving him as an unreliable narrator. Some of the clues to this are opaque, such as a sequence where he sees an episode of MTV’s Cribs on TV where bin Laden shows off his “sick cave” or the climax where Gary (I sh*t you not) has a samurai duel to the death with a confused bin Laden. Some of these clues are subtle, yet excellent indicators. One sequence shows Gary crushing in the casino through divine intervention to make a successful trip oversees, only to be mugged that evening by Mexicans who may or may not belong to the cartel, and may or may not be working for bin Laden. The next day, as he tries to get his friends to help him locate the thieves, they groggily inform him he lost all his money at the casino the previous night. It’s a subtle touch, but it allows us to understand that things may not be as clear as we are to believe. And then there’s the incredibly subtle touches, like the portrayal of Pakistan. In real life, Islamabad is a major metropolis, with many modern conveniences and placing high on the Human Development Index. But the film portrays it as a run-down village, where people live in huts and where dentists operate without the proper tools in the middle of the street. There’s two ways to interpret this: one, the filmmakers have no idea what Pakistan looks like, and are inherently racist. Or two, this is how Gary (and, through him, most Americans) perceive foreign countries, and it is intentionally a satirical look at how narrow-minded Americans can be. I feel this film is too smart to be anything but the latter, and it allows the viewer an extra layer of character development as we observe Gary’s psychosis.

Of course, I don’t want to be too hard on Gary, because Cage’s performance, as manic and over-the-top it may be, is too sweet and too lovable to not entertain you. He has a habit of pushing himself right up to the edge to indirectly racist, but spares himself at the last second. Yes, he may believe that America is the greatest country on Earth, but he doesn’t have a problem with any other human being. In fact, he’s actually fairly accepting of everyone. He’s generous, kind, befriends people of all cultures, and a genuinely good person, interested more in building ramps for young girls with cerebral palsy and hanging out in the bar buying drinks for friends than he is in the actions of the government. Hell, he even admits that he can understand the frustrations with the Bush and Obama administrations amongst those in the Middle East, and simply wants to arrest a master criminal. None of these traits would work without Cage’s brilliance at portraying outlandish, obnoxious characters and giving them a heart and soul, and it’s his best work since 2002’s Adaptation.

Meanwhile, the rest of the cast is never as fascinating as Cage as Faulkner (Jesus, is anyone?), but they all do an adequate job. McLendon-Covey gets the best chance to shine as the love interest, and she runs with it. In her biggest breakout roles, like Bridesmaids or The Goldbergs, she is a standout due to being the wild and crazy one with an acerbic wit and deft physical comedy. Given the chance to be the straight man, she relishes the opportunity, and while it means she’s left to play second banana, she’s still pretty damn good. Brand, meanwhile, is fine, but is perhaps the most miscast. Sure, he’s funny, and it’s entertaining to see him play God, but for the type of story that director Larry Charles (Seinfeld, Borat, The Dictator) is trying to tell, and the way that Cage plays the role, Brand just seems too harsh a personality to inspire Faulkner. In smaller roles, Paul Scheer and Will Sasso are funny as Gary’s friends (a scene involving a knife-throwing competition and Will Sasso is one of the hardest moments I’ve laughed all year), and Denis O’Hare and Rainn Wilson are great as two CIA agents leading the hunt for bin Laden who find themselves irritated at Gary’s shenanigans. Oh, and special praise should be given to Amer Chadha-Patel, who portrays America’s Most Wanted Terrorist with a panache that plays off of Cage perfectly.

Look, I don’t know what else to tell you. This is a movie where Nicolas Cage is told by God to find and capture Osama bin Laden with a samurai sword. You’re either on board or you aren’t. I know that this description is a turn off for many of you. Hell, the majority of critics are panning it as we speak. However, if you’re a fan of stupid comedy, brilliant/surrealist satire, or Nicolas Cage-ironically or not-then this is the movie you’ve been waiting for.