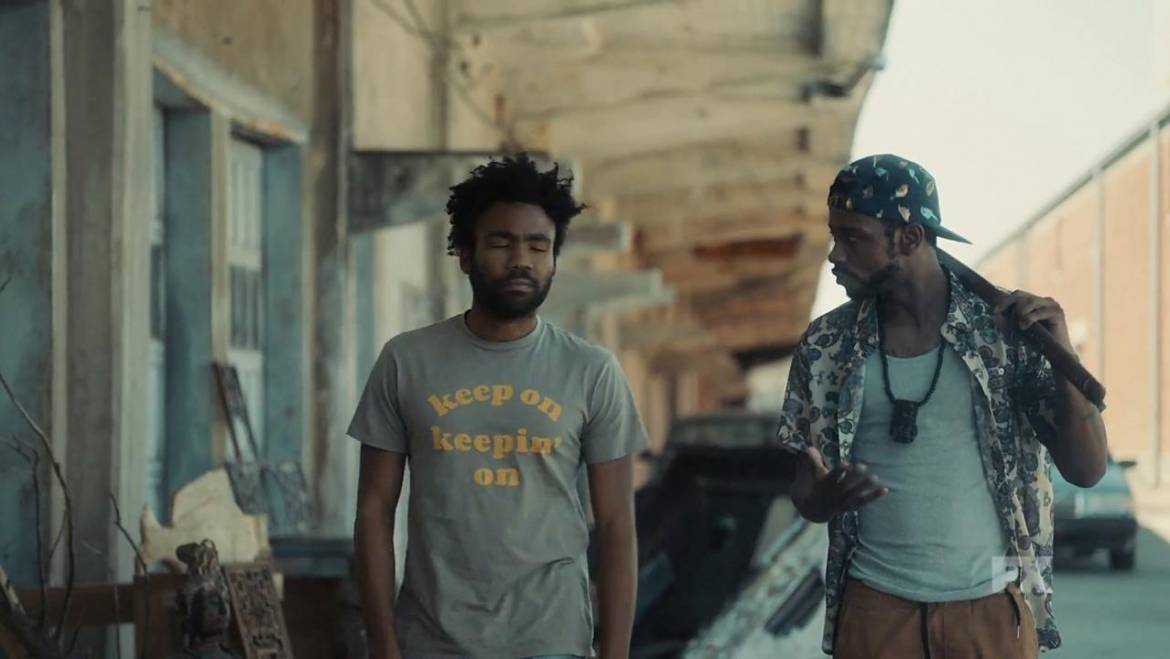 It’s a good time to be FX. They have two critically acclaimed shows running as we speak, they have three anthology series hailed as the best of all time, and their roster is so good, my Wednesday Listicle later today will be devoted to it. So with that in mind, let’s talk about tonight’s episode of Atlanta.

“The Streisand Effect” opens with Paper Boi (Brian Tyree Henry) and Earn (Donald Glover, continuously one of the best performers on TV) discussing ideas for new ventures, including a concert and an album. Earn’s big suggestion is to do an instrumental album in the style of Kendrick Lamar, adding that, “I know some recorder.” Suddenly, some weird guy named Zan comes up and starts talking to them, trying to sell them his hats, shows them memes he made involving Arthur the aardvark (which Earn notes don’t even make sense), and dropping the n-word repeatedly, which makes Paper Boi uncomfortable due to the man’s indiscernible racial background. Darius (LaKeith Stanfield) walks up to the group, and Zan offers him the same deal on a hat. Darius looks at him confused, before offering up a, “Yeah.” Zan gives him a hat, makes Earn give him his phone number, disses Paper Boi’s music, and rides off into the night on a hoverboard. It was one of the weirdest openings to a TV show I have ever seen.

After the opening sequence, Earn wakes up on Darius and Paper Boi’s couch, looking at a gun sitting right next to the mail (the street imagery on this show may be a little heavy-handed, but it’s poignant). Darius is bored, and offers to accompany Earn on errands for the day. Meanwhile, Paper Boi is angered upon learning that Zan has been Instagramming, Vine-ing, vlogging and tweeting negative things about Paper Boi’s music. As they leave, Earn and Darius both warn the rapper not to “bait the dude,” but he keeps typing as they walk out the door.

Paper Boi finds himself angered throughout the day as multiple sketches mock his albums and his talent. We also witness a side-splittingly hilarious fake YouTube vlog that Zan makes to bash Paper Boi’s name, complete with annotations, notes, and a skip ad feature. After witnessing it at a local bar, Paper Boi continues to question his race and talk with his friend about to handle the situation. Luckily, the bartender recognizes the self-proclaimed Social Media Celebrity, and gives Paper Boi the location of his work. The rapper leaves to confront his rival, prepared to unleash his anger upon the obnoxious man. However, upon arriving, he discovers Zan working as a pizza man with a young boy in the backseat. Sobered to the situation, Paper Boi goes with Zan to deliver the pizza, choosing to handle the situation rationally. Zan claims he loves Paper Boi’s work, and sees no difference in what they do. Paper Boi challenges this concept, saying he raps and hustles because “I scare people at the ATM. That’s what rap is-the best way out of a bad situation.” It’s an honest revelation, and one that is often ignored when people talk about hip-hop as a genre. However, Zan challenges this notion, calling it an exploitation of the situation, and Zan’s goal is to simply exploit the exploitation, which is the soul purpose of a “critic.” It’s an interesting theory, and one that I would love to hear fleshed out more. However, they choose not to do this, which is disappointing, but somewhat worth it when the reason for this is to reveal the young boy is not Zan’s son, but in fact his business partner. Zan insists the boy say his catchphrase, which is revealed to be a ten-second continuous bleep. It’s a laugh-out-loud moment, especially when you consider the fact that this show has already said the f-word three times, it begs the question what is too offensive to be said on this show? Meanwhile, the boy goes up to deliver the pizza as Zan videotapes. You see, Zan expects the customer to rob the boy (which he does), and he wants to capture it on tape. Disgusted, Paper Boi exits the car and leaves, wanting to make sure he never stoops to this in his quest to escape poverty, and his departure scored by the bleeped curses of the boy.

Meanwhile, Earn takes Darius to a pawnshop. On their ride over, Darius pitches his theory that “Aids was made as a way to stop Magic Johnson from being the greatest ballplayer of all time.” Earn retorts, “I thought Aids was made by the government to kill homosexuals.” Darius ponders this by responding “Oh, yeah. That too.” He then launches into an explanation about how “black people don’t know who Steve McQueen is.” Earn finds himself more and more annoyed by the conversation, but chooses not to say anything. They arrive at the pawnshop where Earn sells his phone, planning on getting $190 to support his family. However, Darius takes a liking to a sword, and tells Earn, “You know, if you need that money, take the money. But if you get this sword, I can get you more.” Earn ponders this, and notices…a Steve McQueen poster. He asks the store manager, “Do you know who Steve McQueen is?” “Yeah,” the manager replies.” “But would you know who he is if you didn’t have the poster?” “No. Black people don’t know who Steve McQueen is,” he replies. “I only have that poster because if someone comes in asking about that poster, I know he’s planning to rob me.” Earn, feeling guilty at this statement, decides to trade for the sword, and take Darius up on his deal. Darius then takes Earn and the sword to a group of Chinese dealers, where Earn asks, “Do you know how to block mass texts? That Zan dude keeps texting me every party in the city, and he keeps calling them ‘movements,’ and I f*cking hate him.” Things like this come out of Earn’s mouth with a certain sense of poetry. However, as great as this line is, Darius gets to shine even brighter, assuming that Zan may be part Chinese before listing off a bunch of horrible Chinese stereotypes and facts-in front of his Chinese business partners-to Earn’s horror. However, this doesn’t dampen the deal, as Darius successfully trades the sword for a dog. The final step on their journey is to head out to a farm, where Darius hands the dog over to the farm owner. Darius then explains they wait until September for the money, as they need to wait for the dogs to breed in order to sell the expensive puppies. Earn is pissed, as he needs the money that night. He screams at Darius, “Maybe you don’t understand this, but I need to eat! My family needs to eat!” However, Darius counters this, pointing out that he’d warned Earn that this deal requires patience, and yet Earn jumped at it anyway, leaving him speechless. Earn’s biggest flaw has been his ego and his hubris, and once again it has defeated him. As Earn heads to the car, Darius offers him his burner phone, telling him to pawn it to feed his family. Earn accepts the offer, and Darius offers a, “We friends, then,” before climbing into the car. It’s a touching moment, as Earn realized that he’d never really respected Darius’ friendship, and Darius is shown to be a gentler character than we’ve perhaps realized.

Overall, this was a gorgeously shot episode, but there wasn’t much to it. Glover and Henry continue to put up great performances, and I’m now convinced that Stanfield has crafted one of the greatest second-bananas on TV right now. However, compared to the depth the past few episodes have reached, this episode just felt too…slight. There’s nothing wrong with that-the jokes in this episode are great. However, it’s not an episode of Atlanta that lives up to the standards of the first few episodes. But the show is still growing, and with the announcement of a confirmed second season, we get to watch this show continue to grow for at least one more year.