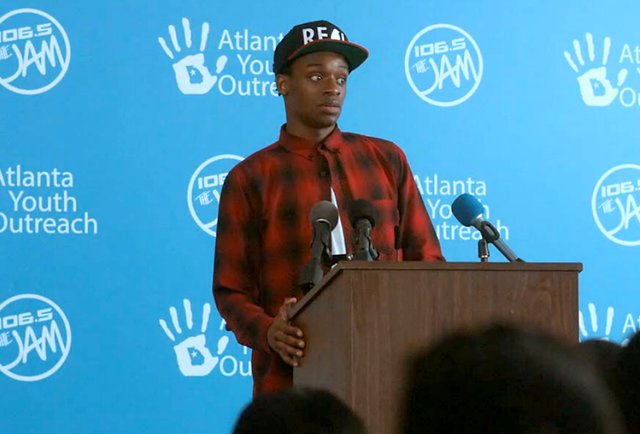 God bless Donald Glover. While Atlanta has served as primary viewing for the past few weeks, it had started to fall into a pattern of fine but forgettable episodes. Sure, its funny to see the show take on trolls with blogger Zan, or have a man seating people at a restaurant with a lightsaber, but where was the real game-changing stuff? Where was the brilliant commentary of “Streets on Lock?” Or something as laugh-out-loud funny as “Go For Broke.” We received it last night with “Nobody Beats the Biebs.” Not only did the episode forward the plot and explore racism in the entertainment industry, it also provided some of the hardest laughs I’ve had at any television program this year. I don’t want to keep you waiting, so let’s dive right into this fantastic episode.

The episode mostly takes place at an Atlanta Youth Outreach fundraiser. Paper Boi (Brian Tyree Henry) is supposed to play in a celebrity basketball game for charity against Justin Bieber, and he’s brought Earn (Glover) along as his cousin/manager. While Earn hopes to set up collaborations to get his client on the map, Paper Boi is willing to settle for flirting with the journalists. He immediately walks up to a female interviewer and starts acting cocky about the game. She barely looks up from her phone, and his confidence starts to decrease. However, when he says his name, she looks up-only she doesn’t recognize him as a rapper, she recognizes him for the shooting that occurred in the pilot. It’s moments like these that demonstrate Henry’s surprisingly natural ability on camera-he never shies away from the story that helped make him famous, but he also regrets his past decisions and wants to move forward from it. It’s something that anyone who has ever done something that they truly regret can relate to, and it helps make him such a compelling character. Unfortunately, the journalist doesn’t see it that way-her audience isn’t into the “gangster thing,” and she isn’t either. Before he gets a chance to respond, her boss-a tall black man who sounds like Eddie Murphy’s impression of a white man comes up to pull her away. Paper Boi laments this loss by commenting under his breath, “Darius Rucker-looking n—–,” in the first true laugh of the night.

The second laugh comes soon after, when Justin Bieber shows up. If you’re like me, you probably have rolled your eyes at several points leading up to this moment. Nobody wants to sit through a Justin Bieber cameo. It would just feel wrong and out of place. Except, it isn’t Justin Bieber. Instead, the show takes a surreal turn: everyone acts like it’s Justin Bieber, and they reference Bieber’s career, but instead, a black, Chris Tucker-looking man plays Justin Bieber. And he plays him as the biggest dick in the world-swearing like crazy, destroying property, and just generally being the most obnoxious man in the world. It’s one of the most bizarre choices I’ve seen in any television show, and I absolutely loved it.

Earn recommends that the rapper should work with him, but Paper Boi rejects the notion-both because he’s reluctant to call Earn his manager and because Bieber had just shouted out “I’m gonna dunk on a bitch!” before dabbing. Earn feels a bit dejected over this, until Janice, a highly respected agent, mistakes him for Alonzo. Earn is about to turn her down, but when she helps get him into the room with all the other managers, he decides to play along, his facial expressions completely showing us every thought going on in his mind. He immediately sets to work with deals for Paper Boi, claiming to be “independent,” and immediately sets to work at the open bar. Unfortunately, it’s here Janice reveals her true motivations: “I know it was you, Alonzo, you f****t c********r.” Apparently, the real Alonzo had forced her out of her old firm, and she makes it her goal to bring him down as a result. Earn finds this entire speech amusing, due to the extreme nature and the fact that he’s not the guy on the receiving end-until reality strikes, and she tells him to wipe “that sharecropper smile” off his face. I’ve seen several shows and films dealing with race, and this may be the most biting and horrifying racially motivated insult I’ve ever heard. It makes a very clear statement about the racism inherent in the system that someone can say that with such ease. It strikes Earn to the core, and he immediately drops the pretense, telling her he’s not Alonzo. It’s unclear if she believes him or not, but she decides she’s going to ruin him anyway. “I’m going to make sure you die homeless,” she tells him, leaving him standing at the bar speechless.

Meanwhile, Paper Boi is horrified as people look on Justin Bieber dotingly as he pees on the floor. HE thinks that Bieber is soft, and is getting a free pass because he’s everyone’s sweetheart. The game begins, and the team is allowing Bieber to get easy layups and dunks for attention. Realizing what his team is doing, Paper Boi decides to step in-he immediately stuffs Bieber’s shot, and the two engage in a war of insults. Unfortunately for Paper Boi, Bieber actually does have some skill, and a real game begins. The score-and the animosity-on the court continue to escalate. As the game winds down, Bieber begins mocking Paper Boi’s career. A fan screams out “I love you, Justin!” and he shouts back “I KNOW, BITCH!” before stealing the ball and taking it down court. It seems like an easy dunk for the Biebs-except an enraged Paper Boi charges down court and tackles him out of the air, in the flat out funniest moment of television I have ever seen. The two duke it out on the court, as young female Justin Bieber fans look on in horror.

Before the episode ends, let’s take a quick detour into what Darius (LaKeith Stanfield) has been up to. I’ve made no secret that Darius is my favorite character on this show, and this episode was no different. After waking up alone and going about a typical day, Darius decides to go to some target practice. He rents a gun and, after being warned by the white owner “not to start anything,” he heads out into the shooting range. The patrons are all tough redneck-types, and if you look in the background, their targets are kind of frightening-one is of a family and another is of a Mexican holding a knife. So Darius heads to his own private spot and hangs up a picture of a dog, before opening fire on it. The rednecks are horrified-who would shoot a dog? They confront him on it, saying that his target is offensive. “Come on, man, my kids could be in here!” they state, in the most horrifically humorous line of the night. Darius counters by saying that in his community, dogs are out of control and attacking children (possibly a lie, but I’m not sure. It’s entirely possible in this show’s reality), and pointing out that the photos they’re shooting are worse. “That one is just a photo of a man that says ‘Dad’ underneath. That’s really specific, man.” However, they aren’t having it, and start to get violent. Luckily for Darius, a group of Mexicans at the shooting range come to his defense, offended by the Mexican cut out. It’s a strong statement about how minorities are subjected to racism and bias every day, and yet only speak out when they absolutely have to, while the redneck sect are more likely to complain any time they’re slightly uncomfortable. Unfortunately, their support fades fast, as they start trying to use Darius as a cause for revolution, which Darius is blatantly against. “I just came down to shoot, y’all.” Nevertheless, the store owner blames Darius for the commotion and throws him out by force, although he does relent to giving Darius back his id.

Back at the Outreach Center, Bieber is holding a press conference over his behavior. It’s the same bullsh*t apology the real Bieber gives every time he does something terrible, until the climax where he reveals “the real Justin” by turning his hat around. The audience gasps, and Justin continues by saying, “This is the real me. I love Christ! I guess I’ve just been hanging out with the wrong people.” He then promises that all of this is explained in a song from his new album, which he then performs with two backup dancers as the crowd cheers (and for what it’s worth, the song-performed by the Childish Gambino-is the perfect spoof of Bieber). Paper Boi is horrified, but decides to capitalize on this speech. He finds the journalist he was flirting with, and offers up the exact same apology as Bieber. She smiles at him and gives him the following advice: “Play your part. People want Justin to be the good guy. You’re the asshole. You’re the rapper.” It is here where the themes of the episode come together, including casting a black man as Justin Bieber. We laughed at Justin’s antics on the show the same way we laugh at Justin in real life. However, his actions are thought of as “charming” and “cute,” while a rapper (a predominantly black field) is vilified and ostracized. We see Bieber as an asshole on this show, but in real life we coddle to him, and a large part of that is because he’s a cute white kid instead of someone from the street trying to make a living. And its almost worse, because some of Bieber’s biggest “charming factors” are co-opted from hip-hop culture, and are demonized amongst actual rappers. It’s a sobering statement, and is made absolutely surreal when coupled with a dancing Justin. Earn shows up, and he and Paper Boi leave in silence after the weird and horrible day that they’ve had, as Justin continues to dance.

What an episode. From its themes, to its casting, to its jokes, everything about this episode lands. It’s the perfect description for the show as a whole: smart, funny, and surreal. This is one of the best episodes of television all year, and I think the only way I can sum it up properly is this gif.