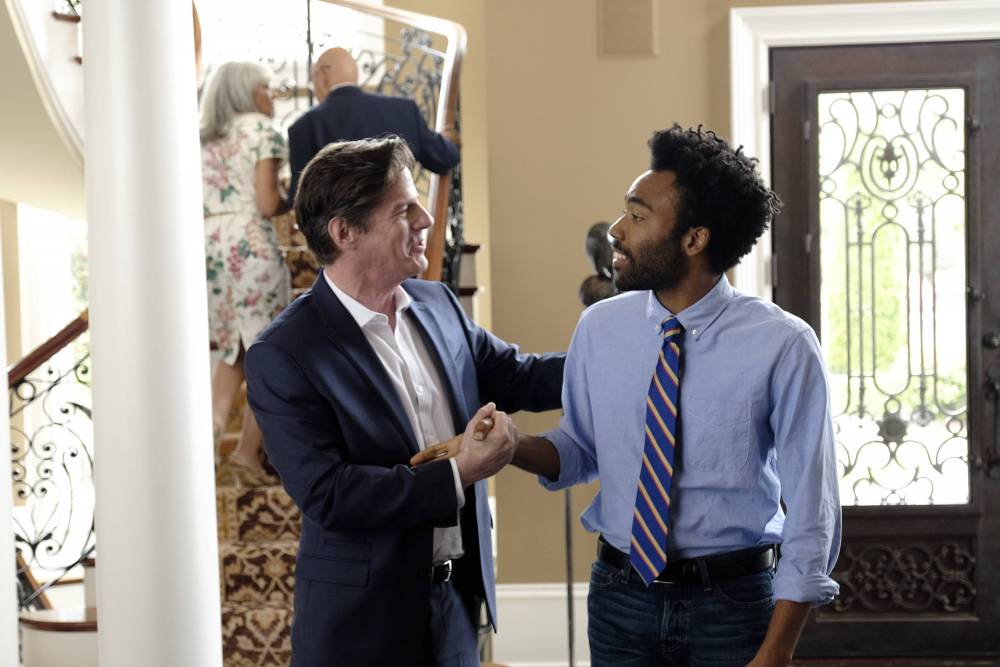 I’ve missed a couple of weeks of this show. My apologies. I skipped writing about “The Club” because, honestly, it wasn’t that great an episode. The jokes didn’t really land, the themes didn’t entirely work, and it just didn’t have the impact of other episodes of the show. I’d give it a C- overall. Luckily, they bounced back with last week’s surreal “Juneteenth,” which, if the episode is any indication, is a topsy-turvy day where anything can happen.

The episode opens with Earn waking up in bed. He soon realizes that it isn’t his bed, and that it belongs to some girl he’s hooked up with. The two share an awkward exchange, ending with his offer of “Thanks,” before leaving to be picked up by a clearly bemused Van. The two are nowhere near the good terms they were on when we met them in the first episode, as can be seen when they have a (fairly amusing) fight over opening and closing the window. You see, they’re going to a party with one of Van’s old friends, who has married a rich white man, and she needs him to play the role of her respectful husband. How rich, you may ask? His house is portrayed as a castle. This is certainly going to be an odd Juneteenth.

Upon entering the house, Earn is immediately confused, and Donald Glover provides us with a series of fantastic facial expressions. The house feels very…plantation-ish, for lack of a better term. He’s referred to as “Earnest” throughout, everything has a decidedly Southern aristocratic feel, and there’s a line of black servants and singers up and down the stairs singing spirituals. “They up for auction after the party?” he asks the hosts disdainfully. However, while Van shoots him dirty looks, the white host, Craig (of course), laughs. It’s soon revealed he wants to be down with the cause-he paints interpretations of Malcolm X speeches, he’s visited Africa multiple times, and has many photos with black people. He asks Earn multiple times where he’s from, to which Earn replies “I’m not sure. This kooky thing called slavery happened and my entire ethnic background got wiped out.” However, Craig just laughs this off.

Earn finds Van and begs her to go-the entire thing feels “very Eyes Wide Shut,” and the serving boats are shaped like slave ships. However, Van finally snaps: she needs this, and Earn needs to stop being selfish and help her for once. As it turns out, Earn realizes that she’s right, and begins to play the part. He plays her dutiful husband as they talk to some of the oddest characters the show has ever had: an aging writer playwright whose recent work is about “A pastor and a pregnant teen who are held hostage by two gangbangers in a strip club during Hurricane Katrina” (a concept Earn calls “very relatable), a reverend bragging about the importance of a “Mega-Church” every two seconds, etc. Earn is then asked about his relationship with Van, and he gives a very point blank speech about their relationship and about how great she is. It’s a surprisingly honest moment. Too honest. It ends up making Van uncomfortable, so she heads to the bar to get drunk while Earn is forced to listen to Craig performing slam poetry (choice line: “Jim Crow. Is haunting me. Like that movie Poltergeist”). As Van gets drunker, she’s invited outside to talk with her friend. The wife admits that she only married the husband for his money, to which Van asks, “Then who do you confide in?” She then turns this into an introspective question-who does she have to confide in? The friend offers up some answer for her, but Van soon realizes this is a quote from For Colored Girls, and the two head back inside.

While inside, the valet asks for a pic from Paper Boi. Craig and his wife overhear, and realize that Earn is his manager. Craig is elated that Earn is helping further such a great art form; his wife, however, is less than pleased, and begins to become very condescending. Van, tired after drinking a lot and putting up with the party’s eccentricities, stands by as Earn completely snaps. He calls the entire party dumb, rants about how awful everything is, and eventually tells Craig, “Stop being so likable!” While his wife is insulted, Craig apologizes and agrees. Somehow this episode managed to even make a character like Craig likable. Van and Earn drive home, and she has him pull over. When they do, she begins to kiss him, and the episode ends as the two of them do it by the side of the road.

Look, “Juneteenth” isn’t the best episode in the series. It’s mostly a vignette-ish way to explore Van and Earn’s relationship, which is a good thing, considering that it’s something left unexplored since the first couple episodes. While I wish there was more, I’m not going to complain too much in an episode that gave us Craig, his slam poetry, or that play. It wasn’t their best episode, but it was a good episode nonetheless.

I’ll be posting my final recap in the coming week. Until then, you can read other Atlanta recaps by clicking on the Atlanta link in the tags above