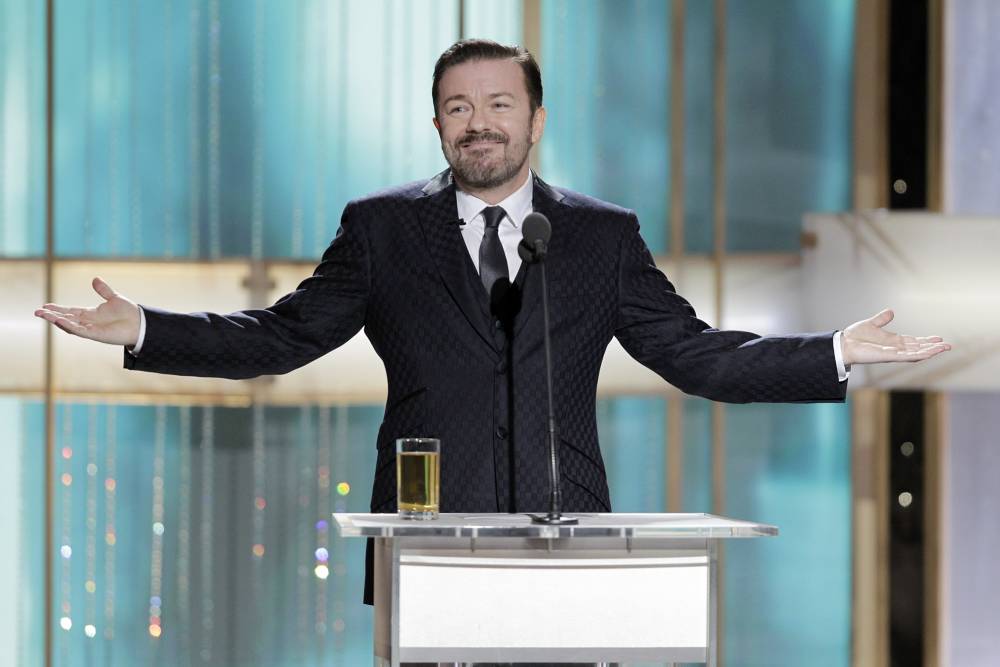 As we enter the final stages of awards season, we’re going to be hearing a lot about upcoming shows and their respective hosts. After the circus that was the Oscars’ attempt to hire a host last year, it should be no surprise that the Golden Globes would want to lock down a host early and efficiently. Oftentimes, that means asking someone from the past to make a triumphant return to elicit laughs and move things right along. Unfortunately, that choice this year is an uninspired fifth outing for the show’s most infamous host.

That’s right, hosting bad boy Ricky Gervais is returning to host the 77th Annual Golden Globe Awards. The former star of The Office and Derek, Gervais made a name for himself with three consecutive hosting gigs in 2009, 2010, and 2011. Thanks to an acerbic wit and a full pint of beer, Gervais eviscerated both the attendees and the event itself. He famously called out the elephant in the room when films like The Tourist (a critically-reviled drama) and Alice In Wonderland (a critically-reviled fantasy) earned nominations for Best Comedy, as well as the Globes’ obsession with Mel Gibson (even to the actor’s face). However, as time has gone on, and Gervais’ ego has inflated, he has started making his jokes meaner and unfunnier, and has stuck his head so far up his own ass he no longer resembles anyone humorous. His hosting gig in 2015 was unbearable to the point of unwatchability. So after Seth Meyers’ respectable job in 2017 and Andy Samberg and Sandra Oh’s absurdist take last year, you can say I’m a little disappointed with this regressive choice for host. If you’re looking for someone fun, but mean, why not pick Stephen Merchant? He’s the one who made The Office what it was, is generally a nicer guy, and will even be in a nominated film with Jojo Rabbit! It’s a win-win! But I digress. Maybe Gervais will do a good job. I don’t know. The 77th Golden Globe Awards will announce their nominees Monday, December 9th and will present the awards January 5th, 2020.