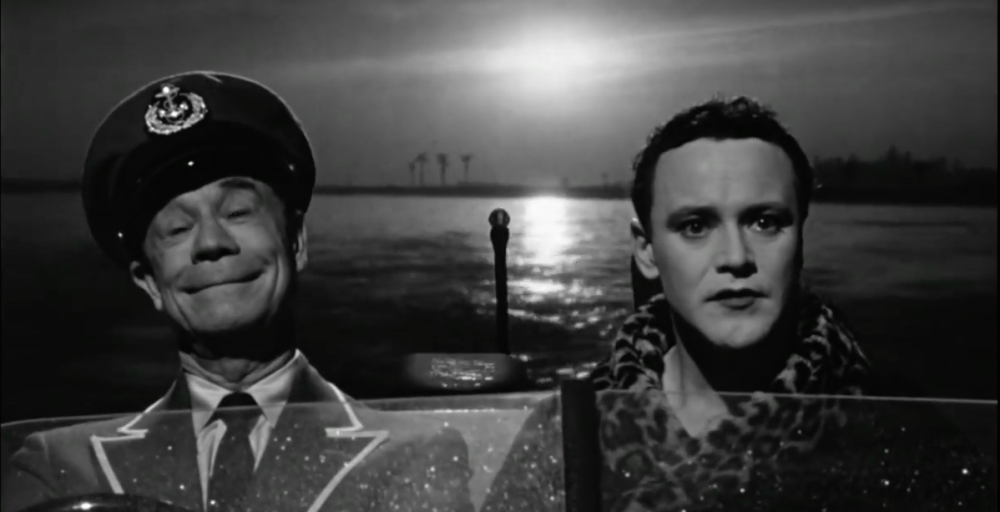 Arguably the most underrated genre in film is comedy. Despite being the favorite of general audiences, you rarely find them on best-of lists or awards races. Perhaps the reason is because it is such a difficult genre to get right. Sure, cheap laughs will always entertain the lowest common denominator (Adam Sandler has built a career out of it), but to actually make something smart, funny, and heartfelt, you have to walk the finest line in any filmmaking medium. In honor of that fine line, the BBC has polled 253 critics from 52 countries for their ten best comedies of all time, creating a combination of their favorites and the “objective” bests. The final result is the BBC’s list of the 100 Greatest Comedies of All Time.

Taking a quick look over this list, I don’t find much room to gripe. Sure, there are some comedies I love that I wish had made the list, personal or cult favorites like Tommy Boy, Three Amigos!, Pee Wee’s Big Adventure, and A Mighty Wind, but there’s nothing I see on my first go-through that tells me this list is abhorrently wrong. However, as for their eventual ranking, a more thorough look is required for analysis, breaking each down by quarters. I did a quick breakdown of decades for your convenience, and discovered the bulk of these comedies came out in the establishment-bucking period of the 60s through the 80s, with the decade of excess bringing in a whopping 18. There was also an uptick of comedies from the 1930s, which makes sense due to the necessity of comedy in the face of the Depression

Starting with #100-75, I see a healthy combination of films that I’m delighted made the list and films that should have been higher. The tie between two Jerry Lewis films for 100 seems fitting in the days following his death, although I have yet to see either of them. I’m a little surprised to see The Hangover on the list, not because it isn’t funny – it doesn’t entirely hold up, but it still is humorous – but because the sequels have ruined its reputation. There are several older films I’m glad to see made the list, including What’s Up, Doc?, A New Leaf, Safety Last, and especially Kind Hearts and Coronets, as well as several newer films I’m glad made it, including South Park: Bigger, Longer, and Uncut, Rushmore Zoolander, Top Secret!, and The Princess Bride. However, there are also a few films that should be Top 20 that are entirely too far down, including There’s Something About Mary, The Jerk, Office Space, and especially Waiting for Guffman and Ghostbusters, two of the funniest movies of all time. I’m very upset neither of those films are Top Ten, but at least they made the list.

#74-50 started to move towards the funnier, newer films, and awarded films that changed the game. Once again we see Jerry Lewis make the list with The Nutty Professor. We also saw some newer classics make the list with In the Loop and The Royal Tenenbaums. I have yet to see Loop, which is considered the gold standard in political comedy, but I will double down on the love for Tenenbaums, which I watched a bit of on HBO the other day and loved once again. However, I’m more excited by the awarded spots for What We Do In The Shadows and Team America: World Police. I think the latter is the funniest film of this century, while the former is the hardest I have ever laughed in a theater, and just barely missed a spot on my 2015 Top Ten list. Both are remarkable comedies, and worth a watch. We also saw Edgar Wright’s two entries fall at 66th and 60th, and while I think that Hot Fuzz (66th) is a better film than Shaun of the Dead (60th), I’m just glad both films made the list. However, not every new film mentioned deserves to be here. I haven’t watched Step Brothers in its entirety, but while the parts I saw made me laugh, I would not consider it one of the best comedies ever, let alone 64th. I guess I’ll have to settle for the rewarding of the “classics,” be they older, like Arsenic and Old Lace and Harold and Maude, or the relatively “newer,” like the good Trading Places (made great by Eddie Murphy, who shockingly doesn’t appear again on this list), the great Caddyshack, and the near-perfect Naked Gun, which would have been much higher than 72nd if it hadn’t been for co-star O.J. Simpson. The list even began to reward films directed by, written by, and/or starring women, including last year’s dark comedy Toni Erdmann and the millennial masterpiece Mean Girls (surely a film that could make an argument for a higher placing). However, personally, I’m just excited that two of my all-time favorite films made the list. I love Best in Show, and am glad it made it, but The Blues Brothers is one of my All-Time Favorite Films, and to see it come in at #53 is music to my ears.

As we enter #49-25, we begin to see many of the heavy-hitters of the comedy scene. Before proceeding any further, I want to address the elephant in the room: no, Pulp Fiction is not a comedy. It has comedic elements, yes, but it is in no way, shape, or form a comedy, and it should not be on this list. On the other hand, darker comedies Trouble in Paradise, The Producers, and Raising Arizona are still inherently satiric, and earn their spots with pride. I’m surprised to see the satiric M*A*S*H* and Borat not break the Top 25, considering I find both films to be laugh-out-loud hysterical, but I’m just glad they made it. The same can be said for the farcical Animal House (easily a Top Ten in my book) and the game-changing storytelling of classics The Philadelphia Story and Sullivan’s Travels. Traditionally “women’s” films began to break through here, from the romantic comedies When Harry Met Sally… (a big day for Rob Reiner), It Happened One Night (shockingly and offensively low), The Apartment, and Singin’ in the Rain, to the female written/directed/focused Bridesmaids and, surprisingly, Clueless. And films with commanding central performances also made a big play with Tootsie (surprisingly dropping from its usual spot in the Top Ten) and the highest film from this century, Anchorman: The Legend of Ron Burgundy (debatably deserving of its spot, but I’d say I’m pro-this decision). And of course you can’t have a list of comedies without an appearance from the Kings of the 30s, Chaplin and the Brothers Marx, and we see A Night at the Opera come in at 39th and The Gold Rush come in at 25th. However, if I had to pick a favorite from this portion of the list, it would have to be the British farce that was A Fish Called Wanda, which came in at 36th. Kevin Kline alone earns that film a spot on this list, and I’m glad it fell as high as it did.

And finally, the Top 25. Here’s where you find the cream of the crop, from Mel Brooks and Young Frankenstein and Blazing Saddles to Monty Python and the Holy Grail to the silent classics of Sherlock, Jr., The Great Dictator, Modern Times, and City Lights (which should be much, much higher). It’s also apparent that the voters loved the screwball comedy, as the Top 20 featured Bringing Up Baby, His Girl Friday, and the modern spin on the genre The Big Lebowski (a bit overrated, but still deserving of the list). This brings us to the Top Ten, and honestly, there aren’t many surprises. I haven’t seen Jacques Tati’s Playtime, but The General and Spinal Tap are both two game-changing comedies. Airplane! is one of my all-time favorite comedies, and I love Duck Soup and Life of Brian. I’m a little surprised to see Groundhog Day at #4, but considering it is regarded as one of the best fantasy films, spiritual films, and romantic comedy films, I guess it makes sense (make no mistake: I do love it, I’m just surprised it made it this high). I’m also surprised Annie Hall landed at #3 considering all of the backlash people have (perhaps deservedly) for Woody Allen, but I for one think it should absolutely be there. Then, of course, there’s Dr. Strangelove, which I think is not only one of funniest films, but one of the best films of all time, period. And perhaps the most surprisingly unsurprising pick of all is Some Like It Hot as #1. I love Billy Wilder, I love Jack Lemmon, and I love this film, but for whatever reason, I’ve never considered this one of the all-timers. Still, I can’t be mad at the selection – it’s still an excellent film.

Overall, there’s a lot to like about this list. The critics did a much better job with this one than last year’s Top 100 of the Century. In honor of this list, I will take a break from the Top 100 lists this week and provide you all with a special surprise this Wednesday. I’ll see you then, and you can see the BBC’s full list below.