Breaking news out of Hollywood tonight as Warner Bros. announces that their entire 2021 slate, starting with Wonder Woman 1984, will release simultaneously in theaters and on HBO Max.

If you’re wondering why that introduction is so short, it’s because I am, quite frankly, still in shock. There are so many layers of ramifications, of causes and effects, that I don’t even know where to begin. The list of films affected by this decision includes blockbusters like Dune, The Conjuring: The Devil Made Me Do It, Godzilla vs. Kong, The Matrix 4, and Space Jam: A New Legacy, alongside Oscar contenders for both this season and next season, like Judas and the Black Messiah, King Richard, The Many Saints of Newark, and In The Heights. Each film will maintain their domestic release date, and will launch in the U.S. the same day it would normally premiere in theaters.

Obviously this decision is going to have serious ramifications on the film industry at large, and I’ll be tackling those in a minute. But first, we need to address the fact that this is the result of an insane series of events, and will likely set off another series of events. After all, Warner Bros. doesn’t get here without a series of things going wrong. If the U.S. had properly handled the pandemic from the start, this doesn’t happen. If audiences at home weren’t obsessed with streaming due to obscenely high theater prices, this doesn’t happen. And if HBO Max hadn’t suffered a miscalculated launch that failed to secure deals with Amazon TV and Roku (the two largest streaming hosts in the world) while simultaneously never explaining to subscribers the difference between HBO and HBO Max, then WB wouldn’t be hastily restructuring their entire platform to rescue the $4 billion project. Oh, and it probably would have helped if Warner wasn’t pressured into releasing Tenet too early by Christopher Nolan as a ploy to “save cinema,” which instead revealed that theaters were not ready to reopen and prevented other studios from following suit, ironically dooming the process altogether.

It’s going to be interesting to see how all of this eventually plays out – particularly how other studios respond. After all, Disney has already made similar comments in terms of emphasis on streaming and a Disney+ release for Soul. And AMC has already come out fiercely against the decision, calling it a knife in the back to theaters (one could claim that their excessive price gouging and predatory behavior toward independent theaters was the real knife in the back doomed to self destruct, but I digress). At any rate, it will be interesting to see how this all plays out in the coming days. You can read the full press release below. 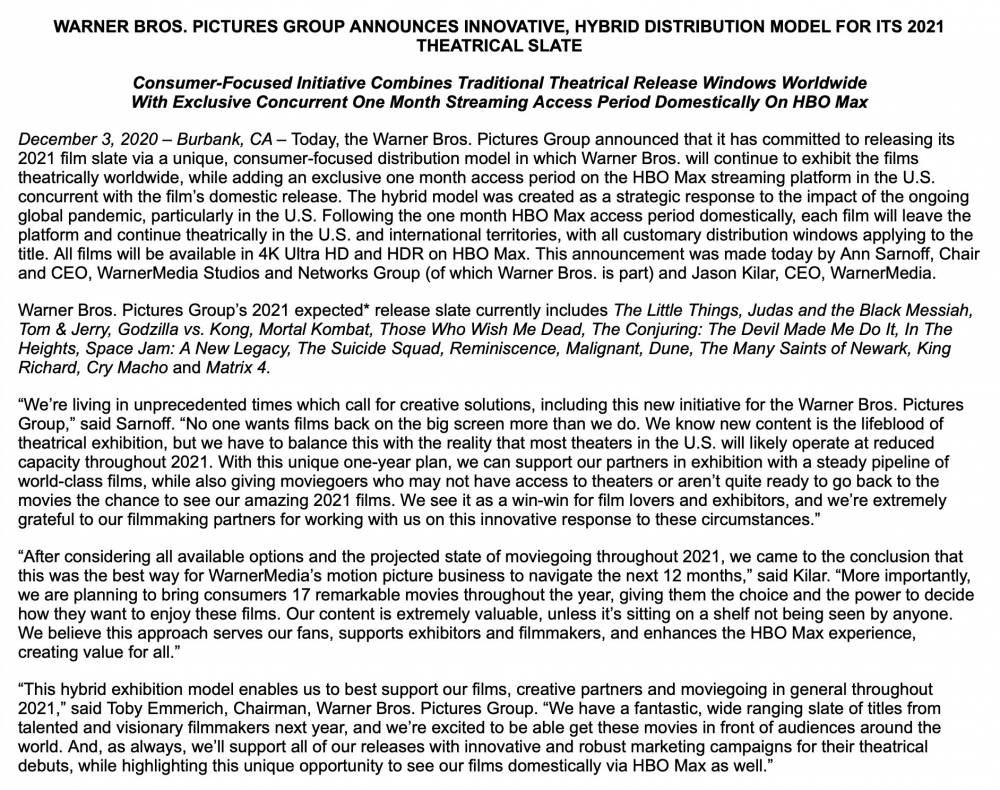