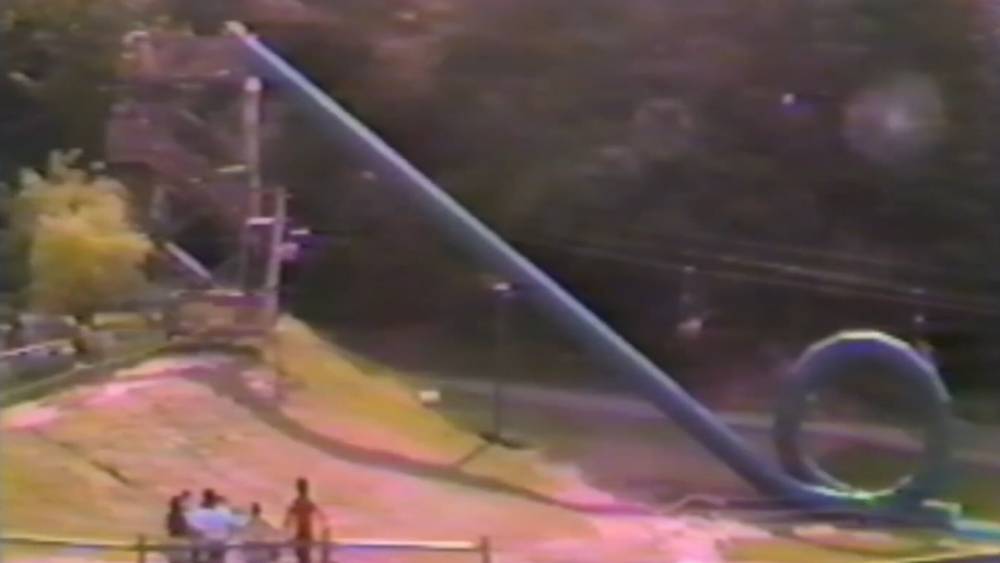 There’s a unique aura that surrounds the infamous Action Park, the New Jersey-based water park founded by shamed Wall Street guru Gene Mulvihill in the late 70s. The story truly has everything, especially if you’re a cynic like me: Wall Street con men flagrantly ignoring all legal and safety protocols, drunk teenagers making terrible life choices, an exploration of how one bad idea can span several bad ideas, and ultimately the use of humor and mental blocks to try and cope with mass tragedy and trauma. With the rich field of material to draw from it should come as no surprise that HBO Max and directors Chris Charles Scott and Seth Porges would try to mine the story for a documentary about nostalgia and hubris. And while it does fall into some of the same traps the similarly themed 2019 documentaries Fyre: The Greatest Party That Never Happened and Fyre Fest fell into, Class Action Park still manages to strike the right balance, and offer up some interesting commentary on grift culture and Gen-X forced nostalgia.

In the 1970s, Gene Mulvihill needed to find a new moneymaking outlet after he was thrown off Wall Street for flagrant fraud. Funded by his buddy and possible mobster Bob Brennan (who helped popularize “pump and dump” schemes), Mulvihill funneled their funds into Action Park, a notoriously unsafe water park located in New Jersey. The park was known for its unsafe conditions and rides: a diving cliff that doubled as a casual swim area, souped-up bumper cars with a clear shot to the freeway (which drove through the middle of the park), ledge-less downhill ski tracks with non-working brakes, a wave pool with tsunami-level settings, and a water slide that went in a loop de loop. The lifeguards and employees were all local 14-year-olds, there was a non-carding beer tent, and the local teen population took glee in finding new ways to make the unsafe rides even worse – often at the encouragement of Mulvihill himself. Class Action Park looks to explore how this literal Pleasure Island came to be, why so many New Jerseians possess a nostalgia for it, and how to grapple with the legacy of a cultural touchstone that killed several people.

The recent era of documentary filmmaking and discourse has involved the incisive criticism and introspective investigation of the rising trend of the grift. While it’s difficult to pinpoint when or why we’ve recently been plagued with a rise in stories about positive-thinking trust fund brats who read The Secret and realized that if they just sold an idea without thinking of the consequences, most humans are dumb enough to fall for it. Long before the film actively name-checks them (be still, my beating heart), Gene Mulvihill’s lawless dreamscape hearkens to mind images of recent grift disasters (and subjects of their own series of fascinating documentaries) like Billy McFarland’s Fyre Festival and Elizabeth Holmes’ Theranos. Class Action Park draws a direct line from the short-sighted, money-first mindset born from the decade of excess through both Action Park and today’s hucksters, as Gene’s story begins on Wall Street during the era of cocaine, greed, and a cult of celebrity that not only inspired a generation in the wrong way, but eventually elected a president (a president who the film shows us openly considered investing, before realizing the idea was too crazy even for him).

Without ever overplaying their hand, or undercutting their message, Scott and Porges break down how the craziest, funniest aspects of Action Park were born out of a naive sense of cost-cutting and manipulation. Child labor laws were flagrantly ignored so that every ride (no matter how sophisticated) could be operated by drunk, horned up 14-17 year olds. Injuries were only ever “serious” – and thus reportable – if Gene decided they were, resulting in multiple fatalities and daily injuries. Hell, the very concept revolved around the notion of “Do It Yourself” fun. And it was impossible to stop, because Gene’s charisma was so powerful, and his grift so straightforward, that he could convince anyone of anything. The town wasn’t willing to step in and control him because of the money being brought in (not to mention the councilmen clearly on Gene’s payroll), and future politicians like Chris Christie are on camera praising his “entrepreneurial spirit.” Class Action Park uses humor and research (two well-worn allies in the battle of speaking truth to power) to break down exactly how Gene’s “cross between Ayn Rand and Lord of the Flies” could and would inspire an entire generation to bullsh*t and manipulate their way to the top on nothing more than a smile and a “dream.”

A major part of what makes Class Action Park so fun is the way it incorporates glibness without ever undercutting the tragedy. It’s smartest decision is incorporating the silver-tongued narration of John Hodgeman (who famously became famous playing manipulative hucksters with convincing voices on The Daily Show and in the Mac ads), while including first-hand accounts from natural storytellers like Chris Gethard. The two of them understand the thin line Action Park holds between hilarious and nightmarish (Gethard as a recurring visitor during his childhood), and they use their comedic gifts to elevate the sarcastic nihilism needed to understand the concept while giving proper heft to the eventual deaths that inevitably come to pass. Furthermore, Scott and Porges perfectly structure the film in order to get the most out of their anecdotes at the right time. This means the first act (which I dub “the fun part” of the film) is dedicated solely to the absurdity of the park itself, leaving the toxic culture and eventual repercussions for the end, as an inevitable coda.

Not only does this allow the story to absorb you through humor and pathos, but it brings the obvious aspects out in the open right off the bat. We don’t need to dwell on the fact that there’s a loop-de-loop slide, or that Gene tested rides by bribing ten-year-olds and seeing where they got injured, or the fact that the park is dissected by a major highway, which also happens to be right next to their beer tent. Scott and Porges use these details to draw us in – an amuse-bouche to the healthier course at the core. It makes the gradual decline into terms like “impaled” and “dislocated shoulder” and “electrocuted” all the more gentle without losing their power – even if each of these nightmarish incidents are often concluded with the oft-repeated commercial slogan “There’s nothing in the world like Action Park!” Now, not every decision is flawless. Scott and Porges utilize the same incorporation of pop culture references that I loathed in Fyre Fraud and Get Me Roger Stone. We get the chaotic implications of the analogies – just let the loop-de-loop slide speak for itself! Nevertheless, this is still an impressively shot film, and the direction helps elevate the story and themes underlying the hilarious awfulness.

Now, there’s an underlying theme in the film that, while never outright explored, is as ever-present as the greed, corruption, and mayhem angles. And that’s the New Jersey-ness of the whole ordeal. The story of Action Park is something that could only be born out of Jersey culture, similar to how certain things can only ever happen in Florida, or Texas, or Ohio. There’s a toxicity in the culture that underlines the entire story, which is part of what makes Gethard’s interviews so necessary. While the other Jersey natives interviewed view their stories with jovial “Kids were tougher back then, but that was crazy!” fondness, Gethard breaks down how a culture of bullying, arrogance, and greed that underlined the state (then overrun by mobsters and corrupt cops who fled New York for the chance of a suburban life). Gethard understands the pain that bore this society, casually noting “We laugh about it, because what else are we gonna do?” It’s a refreshing take especially when compared to 40-somethings laughing about labelling young children “CFS (Can’t F*cking Swim)” while a mother lays flowers on the grave of her dead child. Without ever demonizing its subjects, Class Action Park constantly deconstructs their views, using footage to break down the way that these Gen-Xers refuse to look introspectively to criticize their own upbringing. Sure, hundreds of kids were severely injured, but what we need to understand is that “Back in my day, we didn’t have cell phones! We climbed trees and had REAL fun!”

No character drives this point home as brilliantly as Faith Anderson, a former lifeguard who constantly portrays herself as being a “good girl” while throwing her fellow lifeguards under the bus, and later reveals that she worked the bumper boats right before another interview reveals that working the bumper boats was a punishment for being a pain in the ass. Now, the film doesn’t go nearly far enough into detail on the New Jersey culture for my liking. It seems content simply connecting the crass capitalism and toxic surroundings as a reason for the parks flourishing. But, I mean…there’s gotta be more to it than that, right? What’s the deeper message here? The closest we come to actual analysis of why New Jersians have this toxic death wish comes when the poor New Jersey park employees are condescended to by rich New Yorkers, but that’s it. I want to know why these dumb 80s assh*les got suckered in by the “Darwinian economics” of it all, and have become the perfect douchebag Gen-X archetype. I’m not at all disappointed in the movie I got, it’s just something I wish the film had a little more of.

Class Action Park is exactly what you want in a documentary. Or perhaps, it’s everything I want in a documentary. It takes a weird story, explores the human element, and let’s the story unfold almost narratively through lively interviews, a well-structured narrative, and a decisive lens of commentary and criticism. It’s funny until it’s not, mainly because the film (and about half of its interviewees) understand that sometimes, you have to laugh through the pain. Action Park was the perfect representation of America, and how we got to the broken state we’ve been in for a few decades now: the unfiltered, chaotic greed, an endless desire to rebel against any and all authority, and a growing sense of immorality and apathy towards human life, all wrapped up in a great time for a bunch of dumb teenagers. I wish Class Action Park had dove further into detail on its own themes, and examined its own thesis statement a little closer. But maybe that would ruin the mystique. Like the park itself, things are better when you don’t stop to analyze or overthink things. Just sit back, enjoy the ride, and hope it doesn’t kill you along the way.