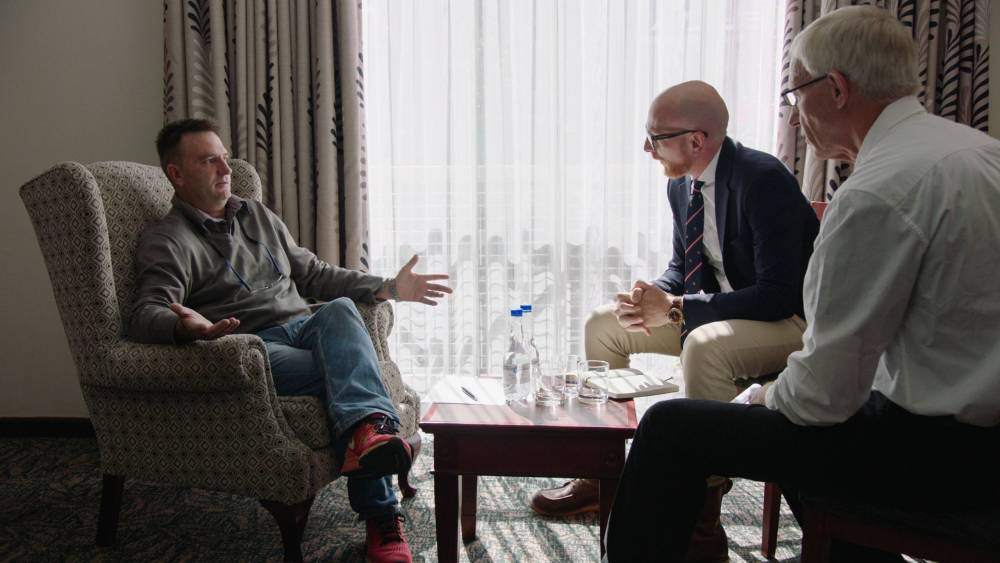 I’ve written multiple times on this site that my favorite type of documentary are the ones where they set out with one plan in mind, only to uncover something greater along the way. The way 2016’s Tickled set out to investigate a weird message board and uncovered a vast criminal conspiracy, or The Act of Killing wanted to study genocide and instead captured a man suddenly realizing the sham of his own life. It is for this very reason that Cold Case Hammarskjöld emerges as one of the year’s best documentaries – it turns a real life story into a 70s-era conspiracy thriller á la All The President’s Men. To put it simply, it turns a documentary into a riveting narrative on par with the best films of the year.

In 1961, U.N. Secretary-General Dag Hammarskjöld, who was working to decolonize Africa and establish the U.N. as a driving force for good in the world, was killed in a plane crash. For years, conspiracy theories have abounded that someone from a first world nation was responsible for bringing the plane down, as a means of keeping the Congo under their control. Recently, filmmaker Mads Brügger and investigator Göran Björkdahl decided to uncover the truth, interviewing actual citizens and potential suspects to see if there was anything they missed. What they uncovered was unlike anything they had prepared for.

At the heart of Cold Case Hammarskjöld is a good old-fashioned mystery. The brilliance of Brügger’s direction and storytelling is his way of unfolding it in the style of a classic noir. Obviously it draws inspiration from classic documentaries like The Thin Blue Line, Serial, and Making a Murderer, but at its core it resembles films like All The President’s Men and JFK, thrillers where ordinary people discover an unbelievably true story about the corruption and evil that exists in our world. For most of the film’s first half, you’re trying to guess where the twisting, turning story will lead you, wondering which countries could have been involved, what the method of murder was, and so on. And you’re shocked at the level of incompetence, racism, and cover-up that went into the initial report of the plane crash, which refused to interview the locals that witnessed the crash simply because they were black. This is a classic mystery in the vein of The Maltese Falcon, where the initial mystery soon gives way to something deeper, and the more you flail to put the pieces together, the more you’re invested in the material, so that by the time you reach the final interview, where a complicit party goes on the record to reveal the heinous backstory, your jaw drops to the floor in response. I won’t spoil the ending for you, but I’ll say this: when you learn exactly how Hammarskjöld was killed, and who was behind it, it’s the least interesting part of the story – so much so that both the interviewers and their smoking gun are surprised that it’s even the focal point anymore. It is cinematic gold.

Even more impressive, however, is the actual execution of the filmmaking. Documentaries thrive on the material they’re given. Unlike a narrative project, where there are scripts and stories and performances, a documentary thrives on what the interviewee reveals, and how the overall message is conveyed through subtext. Once again, Brügger draws from The Thin Blue Line to tell his story, utilizing Errol Morris-esque gimmicks to help demonstrate the severity of this story to the audience. There’s animation, a secretary recording Brügger’s story, solitaire, dramatic emphasis on the Ace of Spades, and more. And while these details are all helpful in visually cluing in the audience to the complicated mystery at hand, the filmmakers also provide a refreshing sense of honesty about these gimmicks: multiple times, Brügger admits the sequences are simply there to show that they haven’t been able to crack the case and are using the gimmicks as conjecture to pad the holes. Now, sometimes this doesn’t fully work – there’s an extended sequence where the filmmakers admit their mission has been a failure, and while it’s great to see them admit to their failures, it’s slow-moving sequence that just drags out the film’s running time. But it’s hard to be too mad over this digression – at least these sequences are headlined by Brügger and Björkdahl. Documentaries like this can only thrive if the filmmaker/interviewer is a charismatic, likable figure, and avoids coming off as pompous or condescending. It was one of the weak points in Tickled – Farrier comes off as a bit of an unaware jackass. Hammarskjöld’s subjects are warm, inviting, funny, and whip-smart, easily enticing audiences to follow them on this journey. One particularly great sequence shows the two preparing the cigars they’ve saved for when they find their smoking gun – only to dig for hours to no avail. These are funny men that truly enrapture us in the core story, and help make this a can’t-miss documentary.

Cold Case Hammarskjöld is many things rolled into one. It is a dramatic mystery, a true crime documentary, a conspiracy thriller, and a living piece of evidence in an underreported case of genocide. It is the type of film that leaves you guessing at what new detail will emerge next, and shock you when you see the truth. It’s the reason documentaries exist, and the reason I consider them a separate art form than narrative films. There is no director, no actor, and no writer capable of telling a story this dense, this mysterious, and this shocking in the same way Brügger does here. This film provides justice for Hammarskjöld, justice for the people of the Congo, and justice for the world in general.