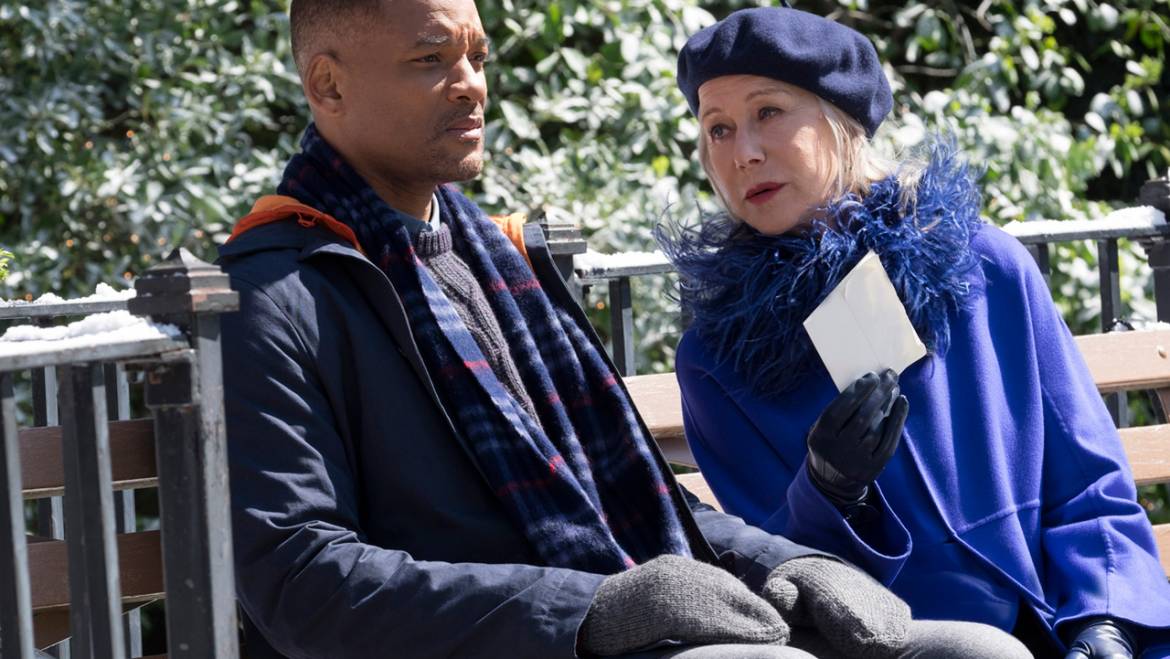 For the first few minutes of Collateral Beauty, I believed the “worst of all time” claims were overblown. Sure, Will Smith’s monologue about how advertising “isn’t just about selling sh*t” quickly devolved into being about how advertising is just selling sh*t, but there’s a spark in his voice, a passion in his speech, and an interesting idea in the importance of Time, Love, and Death. You begin to think, “Oh, this isn’t great, but it’s not so terrible.” And then things change, and you witness a sad Will Smith dressed like an autistic man playing with dominos sadly while knocking them over to resemble a world collapsing. It’s at that point you say, “Oh, no. No no no.” That’s how the entirety of the movie is: giving you a glimpse of something that isn’t too terrible to look at before pulling the rug out from under you and giving you some of the worst writing and acting of 2016. Make no mistake, Collateral Beauty is not in any way, shape, or form a good movie.

(Note: the following description features a spoiler for the film that trailers do not. However, I opt to talk about it because a) this film is so dumb it needs to be talked about, and b) it’s a decision made about twenty minutes into the film. If you want to know nothing about the film, skip the next paragraph or two)

Howard Inlet (Smith, with one of the dumbest names in film history) is a successful New York advertising executive. However, his life falls apart when his six-year old daughter passes away. Unable to eat, sleep, or function for three years, the business begins to flounder. In response, some of his closest friends and co-workers, including the efficient Claire (Kate Winslet), logical Simon (Michael Peña), and selfish-but-well-meaning Whit Yardsham (Edward Norton, with a name somehow surpassing “Howard Inlet” in dumbness), decide to stage a coup. After learning that Howard has been writing angry letters to the concepts of Love, Time, and Death, they decide to hire actors (played by Keira Knightley, Jacob Latimore, and Helen Mirren, respectively), to portray physical embodiments of these concepts, in order to have Howard removed as head of the company for mental instability. However, these mysterious figures will instead teach everyone an important lesson about the beauty found in life and death. (*gag*)

That plot description is exactly what’s wrong with this film. Imagine if It’s A Wonderful Life added an extra twist, during which it is revealed that Clarence was hired by Mr. Potter in order to get George Bailey removed from the Savings and Loan. That’s the general conceit of Collateral Beauty. Now, this itself isn’t a terrible decision, but two things need to happen to make this idea work: first, you need to actually have the directorial aptitude for it, which David Frankel clearly does not possess. Second, you need to commit to one idea or the other. Enough of these garbage movies where they have this magical realism bullsh*t that isn’t really, but then maybe it is. It’s only been done well once, and that was Miracle on 34th Street. It makes for a groan-inducing movie, and one that had me slamming my head against the wall in frustration. Of course, none of this holds a candle to the film’s ending. Make no mistake: the ending of this movie is one of the dumbest of all time. It’s on par with the twist ending to Safe Haven, it’s that bad. I’m not sure who’s more to blame, director Frankel or writer Allan Loeb (who wrote The Switch, one of the worst movies I’ve ever seen), but someone needs to be held accountable for what I just saw.

Whether or not he deserves the blame for this story should be laid at his feet, Frankel still needs to be held accountable for his directing. The multiple shots of the dominos become irritating, the acting is so bad in some scenes there should have been an immediate decision to reshoot, and there’s a recurring cinematography choice that makes me so mad I need to talk about it. The first time Mirren appears to Smith as Death, the camera films her emerging from the snowy backdrop by switching from soft focus to deep focus-which is to say, it goes from incredibly blurry to incredibly clear. This is a somewhat cool effect at first, but then they repeat it for Latimore, and then Knightley, and so on and so forth multiple times. It’s infuriatingly repetitive, and the metaphor itself isn’t that great. Frankel is a fine director-I adore The Devil Wears Prada-but his work here is so sloppy, it is left not only incapable of salvaging the poor material, it elevates its shoddiness.

The actors themselves-an incredibly talented group-are a bit of a mixed bag. Despite being the main character and the crux of the story, Smith is barely even a presence in the film. He does have a moment or two to shine, showing the comedic timing that makes his earlier films great as well as the emotional weight that’s made his later films soar, but he mostly just mopes sadly, and strangely portrays “grief” as a close relative of “autistic.” It’s such a weird choice that’s too weird to be offensive. If anything, the true lead of the movie is Edward Norton, not that this is necessarily a good thing. Poor Edward Norton spends the entire film trying to figure out how he ended up here. He’s clearly not trying, and it makes for a fun game to try to figure out the precise moment of filming in which he realized the film was garbage and just gave up. Winslet and Peña fare little better, and while Latimore is a little…underwhelming in his performance as Raffi/”Time,” Knightley makes the most of her role, and Mirren is so bad she’s kind of great. If anyone makes it through this film unscathed, it’s Naomie Harris as Madeleine, a grief counselor that Howard meets with. Harris feels so natural and so appropriate in the film, I will controversially say it’s a better performance than her soon-to-be Oscar nominated role in Moonlight. Shocking, I know, but that’s the truth. It’s a shame she has to be brought down by the film’s unbearable finale.

If I had to say something nice about this film, it’s that I appreciate the multi-cultural nature of this cast. It’s a refreshing change of pace from the mostly-lily white template of these types of stories. However, this was a movie that just made me feel tired. Tired of movies with faux-magical realism rubbish, tired of movies that make rich people suffer from middle class problems (I don’t need to hear a man named “Whit” who can afford tickets to Hamilton and can shill out $60,000 to destroy his boss/friend’s life talk about how he doesn’t make enough money to get by), and tired in general. I disliked this movie, and considering how poorly it sticks that landing, it’s a movie that isn’t worth your time.