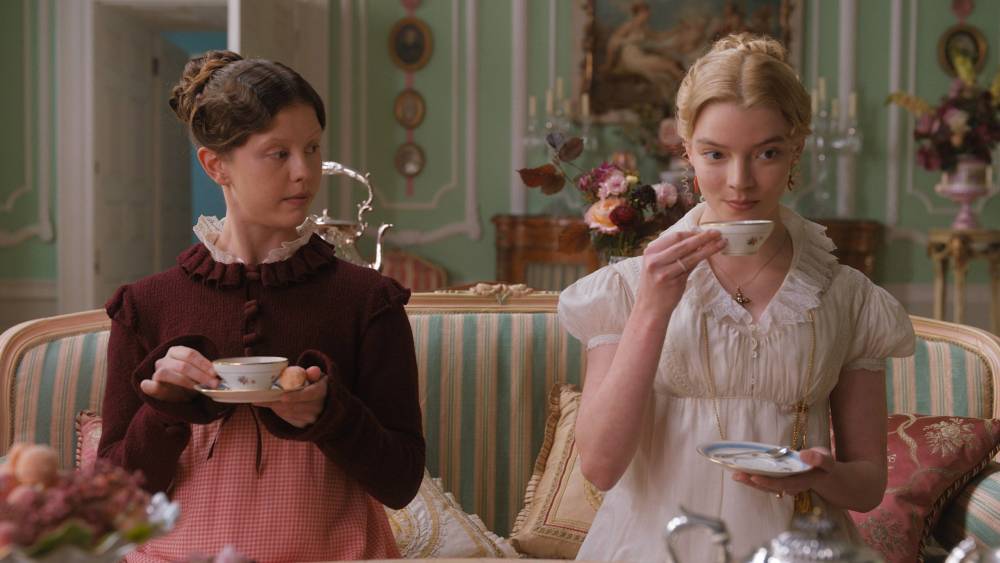 I am not a fan of Jane Austen. I feel it is important to open this review with that announcement. While I respect Austen’s ability to craft witty parables satirizing the ridiculousness of the über-rich, I often find she continuously writes the same monotonous archetypes into the same tedious scenarios ad-nauseum, and all with a holier-than-thou attitude (I often find similar critiques with Shakespeare). I tell you all this as a proper preface to my mindset entering Autumn de Wilde’s adaptation of Emma., a film that marketed itself as a clear rip-off of The Favourite, and which not only surpassed my Austen hangups, but stunned me as a brilliant piece of comedic filmmaking in its own right.

Emma Woodhouse (Anya Taylor-Joy) is the epitome of the wealthy, spoiled child. Living alone with her hypochondriac father (Bill Nighy), Emma entertains herself by playing matchmaker for the people about town, as well as sparring with her sister’s brother-in-law George Knightley (Johnny Flynn). In need of a new pet project, Emma takes young orphan Harriet Smith (Mia Goth) under her wing, in order to find her a suitable husband – perhaps even the new church vicar, Mr. Elton (Josh O’Connor). Meanwhile, she herself pursues the handsome new arrival, Frank Churchill (Callum Turner). But as Emma begins to learn that human beings have feelings themselves, and aren’t her personal puppets, and begins to develop an empathy she hadn’t previously known, she soon learns that the perfect love finds everyone, even in the place they least expect.

Emma. predominantly works because of the way de Wilde stages the story. Without outright mimicking Lanthimos’ style from the Oscar-winning period piece satire, Emma. finds ways of replicating that film’s ability to feel modern without becoming modern. This results in the film’s greatest decision: staging the classic piece as a screwball comedy. The classic genre of the 30s and 40s, screwball comedies emphasized romances built on quick-witted barbs, fast-paced zingers, and hilarious feats of physical humor. While it is easy to find humor in Austen’s classic comedies, the genre change not only elevates the humor, it creates an entirely fresh angle on a tired story. Sequences of flailing worrywarts panicking over drafts and pompous vicars storming out of parties where they aren’t properly catered to are staged with precise hilarity. Sight gags are executed with aplomb, be they hard cuts to two teenage girls hardcore flirting or a terrific shot of a clearly-miserable Emma trying to hold a baby. Meanwhile, both de Wilde’s script and her expert direction elevate Austen’s original dialogue into the witty sparring it always had the potential to be. Emma and Knightley spar with the chemistry of Hepburn and Tracy, delivering great romantic lines like “More than I wish, and less than I ought,” or the particularly great exchange “She is accomplished and superior;” “She is certainly accomplished.” By providing a classic, yet unique angle to the traditional story, de Wilde restarts its potentially-stale heart with a breath of new life.

Even more necessary to the film’s success is de Wilde’s decision to capture the theme most often absent in Austen adaptations: the class commentary. Austen’s greatest strength has always been her ability to satirize the douchebaggery on display from the upper classes of the Regency era. However, Hollywood, for whatever reason (I think we can guess) has always parsed these stories down to the less-interesting romantic subplots (even in the case of the very good 2005 rendition of Pride and Prejudice). De Wilde makes it clear, almost from the jump, that she understands the criticism on display of those in Emma’s position. The opening scene, portrays Emma picking flowers to celebrate the marriage of her former governess…by ordering her servants to pick the flowers for her. Little moments like this show the laziness, selfishness, and obliviousness of the rich of this era, and set her forth on a journey of growth other adaptations (including the terrific Clueless). Emma is not some spunky, likable ingenue – she is a stuck-up, manipulative girl who has had everything she’s ever wanted, and channels her malaise into playing with the emotions of the lower classes. Whereas other adaptations look at the balls and dinners gowns as glorious, romantic ordeals, De Wilde has her cake and eats it too: while the gallantry is fully on display, each elaborate dress, strategic ball, and dinner party is portrayed as a strategic, comically egregious affair. Invitees fight it out for the best seats, ostentatiously display themselves at balls, and make a grand show of their cordial greetings and interactions. Each one of these sequences is portrayed with every ounce of gravitas of a comedy of manners, from The Rules of the Game to Parasite to The Favourite, and by restoring these themes to the material, it returns Emma. to its rightful place as brilliant sarcasm.

I have somehow written 1000 words on this film without yet discussing its production design, which is baffling to me. This is a lush, rich movie that would make most auteurs jealous, let alone a first-time director. In fact, upon revisiting my notes, the exact wordage I used was “scrumptious” – a word I don’t often use and probably won’t use again. Everything, from the top down, is impeccably executed. The scenic design is simply impeccable, while Alexandra Byrne’s costume design is exquisite. She can make ballgowns seem extravagant and orphanage wardrobes both noticeable and hilariously bland. Christopher Blauvett’s cinematography captures every lavish detail, from grandiose, romantic dances to hilariously dramatic zooms on everyone’s faces when characters commit a faux-pas. And De Wilde finds little ways to drop historically accurate, gorgeously staged jokes throughout the backdrop, like the little detail that there are sheep literally everywhere. But the film’s MVP, without question, is composer Isobel Waller-Bridge, whose core is period-appropriate, and oftentimes quite silly. Waller-Bridge’s music utilizes traditional hymns and folk songs that set a mood, lift the spirits, and generally capture the film’s atmosphere to great aplomb. In a year of great scores, this one undeniably takes the cake.

The sumptuous filmmaking is aided, of course, by the all-time great ensemble, which is terrific from the top down – but above all in the performances of Joy, Goth, Nighy, O’Connor, and Miranda Hart. Taylor-Joy (now of Queen’s Gambit fame) in particular is a real delight, perfectly capturing the balance between Emma’s grace, charm, and lovability as well as her stuck-up elitism. She also has a way with words, as her ability to spar helps elevate her chemistry with Johnny Flynn’s Knightley – an actor who lacks the charisma of, say, Matthew Macfadyen or Paul Rudd, but carries himself admirably. Perhaps the biggest surprise of the bunch is Mia Goth, who goes against type as the hilarious, naive Harriet and seems to be having a complete blast. Honestly, I’d like to see her in more comedies as opposed to the horrors and shock-dramas she’s been accustomed to in her short career. Meanwhile, The Crown’s Josh O’Connor takes on the role of the pompous vicar, and manages to deliver a master class in comedic acting. Every aspect of his performance – line delivery, facial inflection, and physical performance – adds to the joke, and it’s the type of star-making turn that makes me anxious for the rest of his career. His declaration of love around the film’s midpoint is awkward, horrific, and hilarious all at the same time (it’s also a testament to Taylor-Joy’s performance, as well).

Speaking of physical performance, I don’t want to leave out Bill Nighy, who has a complete blast as Emma’s father who feels deadly drafts wherever he goes. Nighy uses his facial tics and his twig body as a prop, surrounding himself with an absurd amount of curtains and flying into a panic at a moment’s notice. It’s a testament to the screen legend’s talent, and I am here for it. And rounding out the film’s main cast is Miranda Hart, the renowned British comedian who shows up sporadically to steal the damn movie. No one can ramble incoherently like Hart (who previously wowed American audiences in Spy), and she uses that gift wisely as the well-meaning busybody Miss Bates. Callum Turner’s Frank Churchill is appropriately handsome, as is the mysterious rival to Emma’s popularity, Amber Anderson. And while it’s a minor role, I want to give a special shout out to Oliver Chris, who plays Mr. Knightley’s brother, and Emma’s brother-in-law. In a minor role (I don’t think he even has any lines), Chris manages to give a noticeable, hysterical performance as a put-upon husband to a formidable, spoiled wife (a mirror to what Emma could be if she doesn’t go through change), and I cannot commend him enough for elevating what could have been a nothing role.

Emma. is an absolutely delightful take on a classic tale. By restoring vital themes and finding fresh angles, it manages to maintain Austen’s original source material without losing an ounce of originality or tact. It’s been several months since I saw this film for the first time – and a few weeks since seeing it a second – and I still lavish in the lush artistry, the pitch-perfect performances, and the skillful delivery of the dialogue. Now, in the Year of Our Lord 2020, do we really need another Jane Austen adaptation? Probably not. But if there must be a new take on a classic, I can only hope it’s as smart, as funny, and as excellently structured as Autumn de Wilde’s first outing.

Emma. is now streaming on HBO Max, and can be rented on most On Demand services