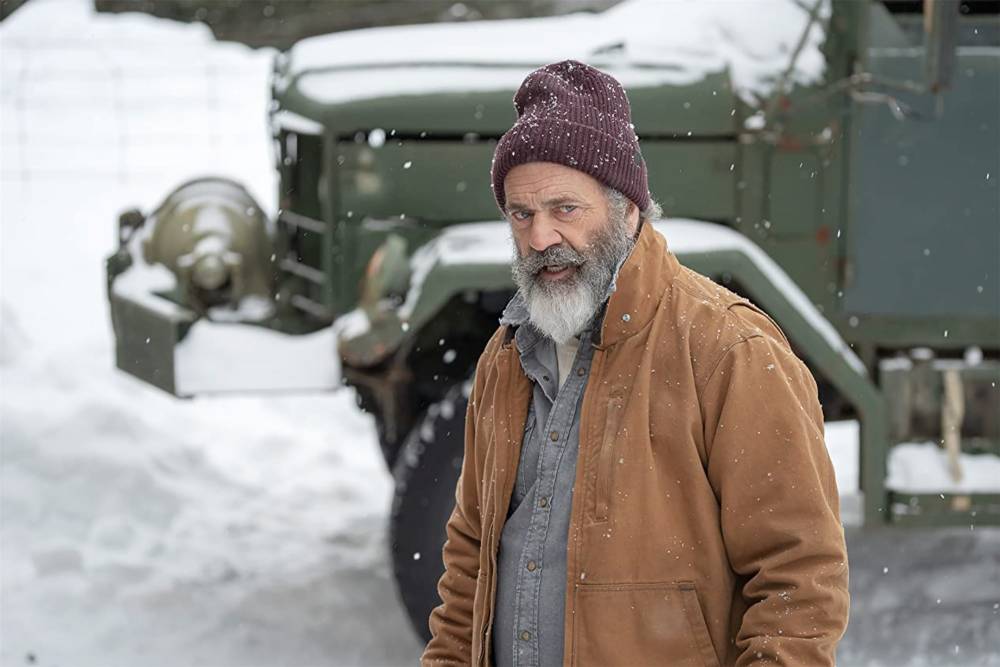 While I am always a proponent of Hollywood getting its freak on, there is such a thing as too weird. It’s damn hard to hit – after all, cinephiles are willing to crawl around inside John Malkovich’s mind or watch Nicolas Cage and John Travolta swap faces. But every so often a film just goes too far, asking too much of its audience with a far-too-outlandish setup. And thus, we have Fatman, a film by Ian and Eschom Nelms where Mel Gibson plays a grizzled, nihilistic Santa and fights off hitmen. What could have been a terrific short film or SNL sketch is dragged well beyond its limits while simultaneously being unable to decide between its ridiculousness and its seriousness.

Chris Cringle (Gibson) has grown disillusioned with the world around him. While he had prided himself for decades on his ability to deliver presents to the children of the world, an ever-growing sense of disdain for the evils of society has left him delivering more coal than presents and drinking away his sorrows. In fact, his quota of toys has fallen so far behind, his government subsidy is in question, forcing Chris to take a U.S. military contract to make ends meet. However, Chris has bigger issues: after receiving coal for threatening and torturing his classmates, billionaire middle-schooler Billy Wenan (Chance Hurstield) hires a hitman (Walton Goggins) to hunt down the infamous fat man and eliminate him once and for all. And the hitman, who has his own grudge with the man in red, happily accepts.

There’s no denying that Fatman is a premise with excellent promise. In fact, one could imagine this concept kicking ass as a short film. The concept of an angry, embittered Santa who delivers lines like “All I have left is a loathing for a world that’s forgotten” and spends his off-days drunkenly shooting at beer bottles is inherently incredible. The Nelms brothers consistently find little touches to explore and flesh out this concept, like the implication that Santa’s worldview has been corrupted by talk radio’s rantings about potentially fictional street gangs of children and “participation trophies.” There’s also the increasingly humorous angle of Walton Goggins’ hitman (who is a blast from beginning to end) becoming an assassin because he didn’t get what he wanted for Christmas as a child, and spending the entire film hunting down leads to kill Santa. There is something inherently funny about Goggins waving a gun in a postal worker’s face and screaming “WHERE DO THE LETTERS GO?!?” These are good ideas; unfortunately, there’s not enough there to make an hour and a half movie. Each storyline is interesting for about twenty minutes before outstaying its welcome. And what’s worse, they are intercut and interspersed at random, which may work in the hands of a stronger filmmaker, but here works to its detriment. As is, the jumping storylines deny us the ability to understand any one character or plotline. Had the film taken its time, developed a character, and then fleshed out its universe, it may have worked better. But as is, this is a great short film expanded into a mediocre feature.

The mixed-bag nature of the filmmaking applies to the film’s tone, as the Nelms Brothers seem unable to decide if they want this film to be unabashedly self-serious or laced with silly irony. Whenever the film decides to go silly, like the billionaire child having a massive Napoleon portrait on his wall and threatening a classmate with a car battery, it then bogs us down with a super-serious theme or message, like a lengthy explanation of how Santa is subsidized by the U.S. government as a scheme to kickstart the economy at Christmas, or portraying the military as running an abusive Amazon-like factory when the elves are signed to a military contract. Now, these are both terrific angles; I’ll even admit that a story about a man who consistently saves the economy but isn’t given his stimulus check from the U.S. government and can’t pay his bills hits home in December 2020. But because the film never pays these themes or plotlines the due they’re owed, and simultaneously cuts back to a ridiculous touch, like the score by Mondo Boys constantly remixing classic Christmas songs as thrilling orchestrations (“Carol of the Bells” in particular serves as this film’s Western standoff music), or scoring dramatic reveals to Bing Crosby’s “Do You Hear What I Hear,” the film ultimately results in a tonal whiplash that never meshes the way it needs to.

In terms of the acting, everyone’s sort of exactly as you’d expect them to be – with one perfect exception. The grizzled, notoriously aggressive Gibson is, admittedly, perfect casting on paper, and he does work on occasion. Particularly, he pulls off any moment where Chris threatens or rants at the people he encounters (perhaps he’s not acting). But something still seems…off. While he has the melancholic anger down pat, there’s something missing in this performance to elevate this film to the next level. Ditto with acclaimed actress Marianne Jean-Baptiste, who brings an elegance to Ruth that is needed, but can’t overcome the film’s inability to write for women. Eric Woolfe seems to enjoy himself as Elf #7, the leader of the Elf Union, while Robert Bockstael has a proper menace as the military commander Captain Jacobs. In fact, there are only two performances that stand out above the rest. The first is Hurstield, who plays the perfect über-rich assh*le, and relishes in each opportunity to push his douchebaggery to the next level. The second and most important member of the ensemble is Goggins. Goggins is having an absolute blast as the hitman, understanding how exactly to balance the silliness of the film with the seriousness of the role. Goggins hams it up to eleven while simultaneously acting as if every moment is The Most Important Thing In The World to his character. It is a master class in comedy, and elevates the entire film tremendously. It makes me wish every performer had gotten on Goggins’ level – it would have made for a better film.

Fatman is a confused film that fails to live up to its own promise. It goes dramatic when it should be fun and tries to have fun when it should be serious. I don’t fault anyone involve – there’s real promise in both the Nelms’ direction and writing, and I think Gibson does as good a job as he can in the role. But I can’t help imagine what a more…fun insane actor in the role, like Nicolas Cage, or John Malkovich. Imagining the fun they could bring really makes it clear how depressingly dull the film that exists really is. I’m not mad I saw Fatman. I’m just disappointed.

Fatman is now available to rent from most On Demand services