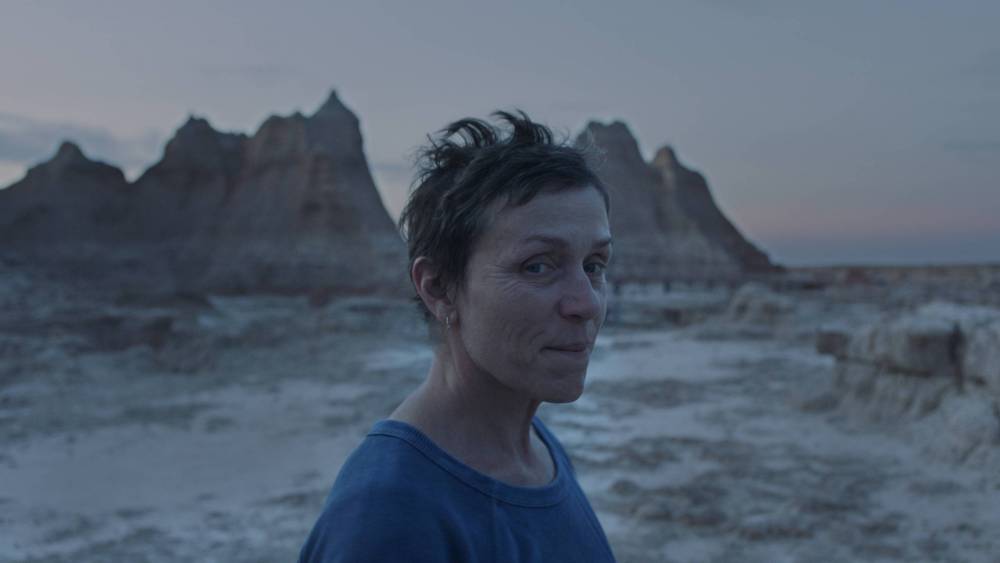 The industry awards may not start until February, but make no mistake: awards season is officially underway. And with 2020 kinda coming to a close (we have no idea if Malcolm and Marie or Judas and the Black Messiah will make an impact), the three most influential critics’ groups – New York, Los Angeles, and the National Society of Film Critics – have made their preferences known. And while they did have some differences, there are a few key takeaways worth noting. Specifically, that there is widespread love for Chloé Zhao, Small Axe, Radha Blank, and the late Chadwick Boseman.

The New York Film Critics Circle was the first group to vote, announcing their winners last Friday. While First Cow (the Top Ten list frontrunner for most publications at the moment) took home the top prize of Best Film, the one-win wonder was overshadowed by a handful of other big winners. For example, Spike Lee’s Da 5 Bloods, which has fallen off of many critics’ lists, managed to earn two acting awards – one for lead Delroy Lindo, and one for Chadwick Boseman’s moving portrayal of a fallen Vietnam soldier (whose third-act monologue about grief and forgiveness has taken on new meaning since the actor’s death). Lee also received a special award for his short film love letter to New York earlier this year. Also receiving love was Never Rarely Sometimes Always, which won Best Screenplay and earned lead actress Sidney Flanigan a fairly well-deserved Lead Actress win. And in a surprising, but deserving, turn, New York continued its tradition of awarding comedy by presenting Best Supporting Actress to Borat Subsequent Moviefilm’s Maria Bakalova. To be fair, I’m not sure who else you could have picked – she’s that good. Steve McQueen’s anthology Small Axe pulled off a surprise win in Best Cinematography, and while her film underperformed expectations, Chloé Zhao won a deserving Best Director award for Nomadland.

Meanwhile, the National Society of Film Critics went a completely different direction. Whereas frontrunner Nomadland underperformed in New York, one could say it overperformed on a national level (not to say it doesn’t deserve its praise). Nomadland took home a staggering four awards, for Best Film, Best Director, Best Actress for Frances McDormand, and Best Cinematography. It was a massive win for the film, which had faced an uphill climb after getting slapped with the “frontrunner” moniker. The group then proceeded to continue trends started from their East Coast brethren, as Lindo earned his second title this season, as did Bakalova. The Borat star’s mention is certainly worth noticing – whereas the NYFCC has a history of rewarding comedic turns, the NSFC does not. If they’re rewarding Bakalova for her work as Tutar Sagdiyev, then there’s something seriously worth noticing going on. Never Rarely Sometimes Always managed to take home its second writing prize, making it a dark-horse contender for Best Original Screenplay at the Oscars. And the acting categories were rounded out by critical darling Paul Raci, who has been receiving nods from individual critics’ groups all month, and put himself on the Oscar map with a win here.

And then there’s the Los Angeles Film Critics Association proceeded to throw their own wrenches into things. While there were a few similarities (Wolfwalkers in Best Animated Film, Never Rarely a contender for Best Screenplay), L.A. decided to shake things up with their treatment of Small Axe. Not only did the collection of films win Best Cinematography, as New York decided, it ended up winning the whole caboodle. That’s right, for the first time in history, L.A. awarded an anthology the Best Film award, beating out Nomadland for the top prize. This is a bit of a conundrum for other critics and outlets – Small Axe aired on television, and is competing for the Emmys, but is very clearly a collection of films. This makes it more of a head-scratcher for those trying to prepare Top Ten lists for Film and Television (I’m thinking I’ll end up just doing both, myself). No matter what, it’s a crazy, inspired decision on the part of the LAFCA.

The most significant win here, however, is Zhao. By winning Best Director from the National Society of Film Critics, she is now 3/3 amongst major groups, and 5/5 overall. That’s a staggering accomplishment, and I find it difficult to imagine anyone else winning Best Director at the Oscars later this year. Outside of Small Axe and Nomadland (who each contended in several categories), other big winners include Ma Rainey’s Black Bottom and Promising Young Woman. The former nearly swept the acting categories, earning wins in Best Actor and Best Supporting Actor for Boseman (he really went out on top, didn’t he?) and Glynn Turman as well as a Runner-Up award for star Viola Davis. As for Promising Young Woman, the dark thriller earned two awards – one for its impeccable Screenplay, and one for lead Carey Mulligan. Other dual winners include the documentary Time and the foreign language winner Beanpole. This is especially good news for Time, who went 3/3 with the groups and cemented themselves as the Best Documentary Feature frontrunner. And in terms of Oscar contenders, Mank and Sound of Metal certainly didn’t have the weekends they were looking for, but they at least found some support at LAFCA – Mank won Best Production Design and earned Amanda Seyfried a Runner-Up notice, while stars Riz Ahmed and Paul Raci both earned Runner-Up nods for their work on Metal.

Oscar season is upon us, people. You can smell it in the air. I’ll have more news as groups continue rolling out awards throughout the month, as well as prepare my predictions for next month’s industry awards. In the meantime, you can see the results from all three groups listed below.