If you stick around this site long enough, you’ll learn that I’m a huge fan of the work of Benedict Cumberbatch. Perhaps this is because of his incredible talent, perhaps because I have a massive man crush on him. Either way, I think he is one of the greatest working actors. However, no matter how many fantastic performances he will give in the years to come, it will be difficult for him to ever top his defining performance as famed detective Sherlock Holmes in the BBC series Sherlock.

Created by Mark Gattis and renowned sadist Steven Moffat, Sherlock translates the famous Arthur Conan Doyle stories to modern day London to great effect. Focusing on the relationship between Holmes and his partner Watson (the king of reaction shots Martin Freeman), the show is about to enter its fourth season, following a shocking third series cliffhanger, as well as an even more bizarre Christmas special that created more questions than answers.

Sherlock is one of my all-time favorite programs, and I’m incredibly glad that the new season is right around the corner, considering fans have often had to wait two or three years in between seasons, creating massive demand once new episodes are created. In the first image from this new season, Sherlock’s casework seems to have earned him the company of a dog. Frankly, it’s no Watson, but the idea of the emotionally cold and socially awkward Holmes trying to solve cases with a dog is enough to entertain me for the next six months, and I’m sure will inspire a thousand fan fictions by the time this picture has made its rounds.

Sherlock Series Four is expected to be released late 2016/early 2017, and if you need to fill the void in your heart, the entire series is on Netflix. 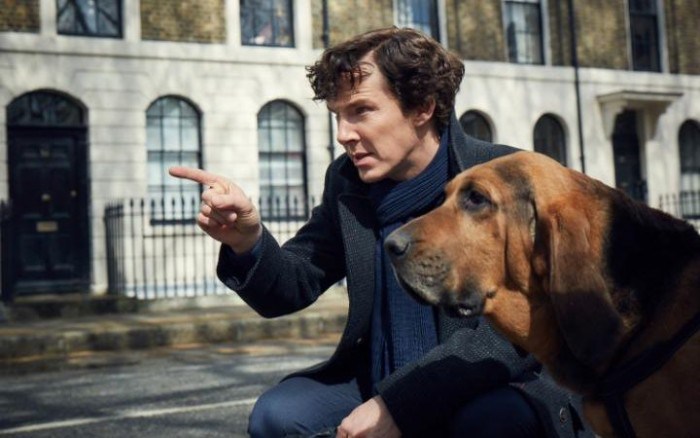