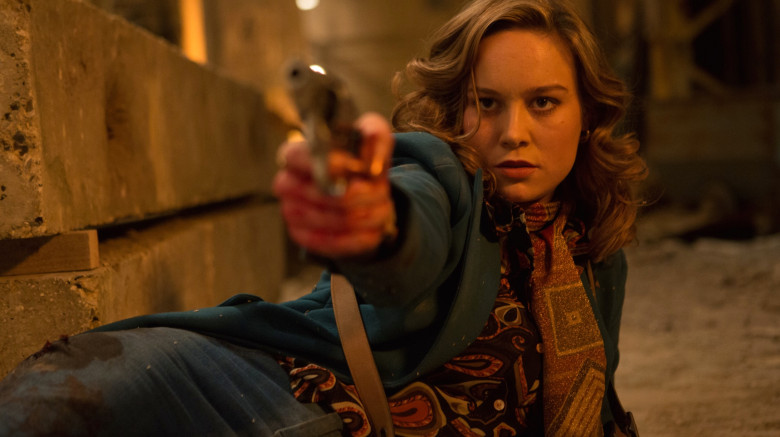 Free Fire is one of those films that has so much potential to be great, it makes you even angrier when it isn’t. Writer/Director Ben Wheatley had so much promise in his idea for a free-for-all shootout in a single location between a series of crazy characters that it seemed impossible to fail. What’s more, certain sequences in the film were so strong, it would seem the only way it would be possible to fail would be intentional. That’s why I’m so frustrated at the final result. The fact it ends up being an overwhelmingly uninteresting final product is somewhat of a slap in the face of not only the wholly game cast, but the eager audience promised a Scorsese (who has his name on the project as an executive producer) or Tarantino knock-off.

It was supposed to be a fairly simple trade-off. Arranged by representatives Ord (Armie Hammer) and Justine (Brie Larson), the plan is for the I.R.A. leaders Frank (Michael Smiley) and Chris (Cillian Murphy) to purchase assault rifles off South African gun runner Vernon (Sharlto Copley) and his former Black Panther associate, Martin (Babou Ceesay). Each group has brought along two henchmen as a form of “muscle.” However, as the tensions build and boil over, guns are drawn, and suddenly, the ten characters find themselves in a free-for-all gunfight for their very lives.

On paper, this is a fabulous project. The characters are unique and funny, the idea of a shootout in an enclosed space is clever, and the fact the project is set in the 70s makes for fun costumes and music. And yet, there are so many issues I don’t even know where to begin. I guess I have to start with the most obvious, and the most shocking. This film is boring. Each act starts off with so much promise, only to make you slowly lose interest, until you begin to say, “Well, maybe it’ll catch on in the next act,” and then the cycle repeats. Let’s start with act one, which starts out bad, and then picks up steam once we meet Ord. However, let’s break down this sequence to see where it goes wrong. The tension is slowly built up by a series of misunderstandings and betrayals: the wrong guns are brought, personalities clash, and members were involved in a previous bar fight. Throughout this, you’re left thinking two things: what’s going to be the incident to set it all off, and do I care? The answer to the first, despite several McGuffins, is fairly obvious in hindsight, while the answer to the second seems to be “yes” at first, only to result in a resounding “no” the longer the intro continues. And that’s the problem. It always starts with a good idea, only to leave you growing more and more bored as nothing happens.

This can also be seen in Act II, when the action picks up. You think to yourself, “Ok, now we’re cooking with fire. This should be great.” Except…it isn’t. The entire act is just the same sequence of events on repeat, for nearly thirty minutes. Someone comes up with a plan, they all make jokes to incite the other side, they try to execute the plan, someone gets slightly wounded, they retreat back to their area of the warehouse. And then it starts all over again. And sure, some of the jokes are kind of funny, but that’s barely enough for a short film, let alone an hour and a half-long movie. Personally, and in slight spoiler-ish territory, I blame this on the movie’s inability to kill off any of its main ten for most of the film. The joy of movies like this comes from never knowing when a major character, whether you like him or not, will die. Let’s take a look at Tarantino, because he is the master of these kinds of movies, what with Reservoir Dogs and The Hateful Eight. In both movies, he slowly kills off characters, in random orders, just to keep the tension alive, as well as to keep momentum going. In Free Fire, he leaves all the characters alive until the last ten minutes, filling our blood lust with random aside characters that are barely necessary for the plot’s functionality. It’s almost like Wheatley thought we would care about these characters enough for them to last until the end. I can assure you that we do not. I loved Ord and Vernon a great deal, but that’s what would make it so much more interesting for them to perish at the thirty-minute mark, so that I never get the chance to grow tired of them. All leaving these characters alive does is drag out the plot and leave the audience stranded without momentum.

Look, that’s all well and good so far. “It’s sort of boring, but kind of pretty to look at. It’s what you’d expect from a so-so director.” That alone isn’t what makes this movie so frustrating. It’s that the moments that are good are really good, which makes the lesser moments so much more infuriating. For example, there’s a sequence near the end of the film involving two characters, a truck, a horrifically bloody ending, and John Denver’s “Annie’s Song.” That is funny in and of itself, and thanks to great acting, funny dialogue and pacing, and great direction, it’s a fabulous sequence. It’s what we were promised with the basic setup of the movie. But that’s it. Just one sequence, that comes at the very end of the film. The entire movie should have been like that! This is the way it feels every time there’s a great line following twenty terrible ones, every time a fight sequence is well-shot after four terribly paced ones, and so on. This is a film that knew how to be good, but actively chose not to be. And that makes me angrier than anything else about the film.

As for the cast, the actors are all fine. None of the characters particularly stand out, so I don’t have anything mean or nice to say about the bulk of them. However, there were five actors that managed to stand out, thanks to the best dialogue and acting. The best of the lot, hands down, was Armie Hammer. I have mixed feelings about Hammer as an actor, having loved him in The Social Network but watching him destroy my childhood with The Lone Ranger, but when he has good dialogue and a clear vision, man is he good. He makes Ord a dashing, funny assh*le, and I couldn’t get enough of him as he sat in the corner and sarcastically mocked the idiots around him. After Hammer, I’d say I enjoyed Murphy the second most. The closest thing this film has to a great actor, Murphy is the straight man of the action, and as it turns out, that’s something this film desperately needed. Especially when contrasted by Sharlto Copley’s Vernon. Copley’s thing has always been “When I say ‘go big,’ I mean go BIG!” He’s the most overactiest actor to ever overact. And yet, if I’m being honest, I kind of like it. Especially here, where his dialogue feels almost improvised to an absurd degree. I can’t badmouth a performance this fun. Meanwhile, newcomer Jack Reynor, who broke out in last year’s charming Sing Street, makes a clear shot for superstardom with his Denver-loving idiotic assh*le Harry. And finally, I could never badmouth Ms. Larson, one of the best actresses working today, who clearly has a blast teetering the line between straight man (or woman, as the case may be) and lunatic (her delivery of the line “Would everyone just calm the f*ck down?!?” is one of the great moments of the film).

In the end, I think Wikipedia does the best job of explaining the problem with this film. After seeing this film, my brother and I got into an argument over the ending. We chose to consult Wikipedia to figure it out, and the plot description didn’t even match what we had figured out. This tells me only one thing: this film is somehow so simplistic and yet so convoluted, people don’t understand it or just don’t care enough to understand it. It makes a fun concept seem boring, and then taunts us with a series of great sequences, just to show us what could have been. I can’t mark this film down all the way, because the acting and good sequences are legitimately great, and deserve their kudos. But man, is it frustrating to see a film with this much promise and this much talent mock its audience by delivering something that is so substandard.