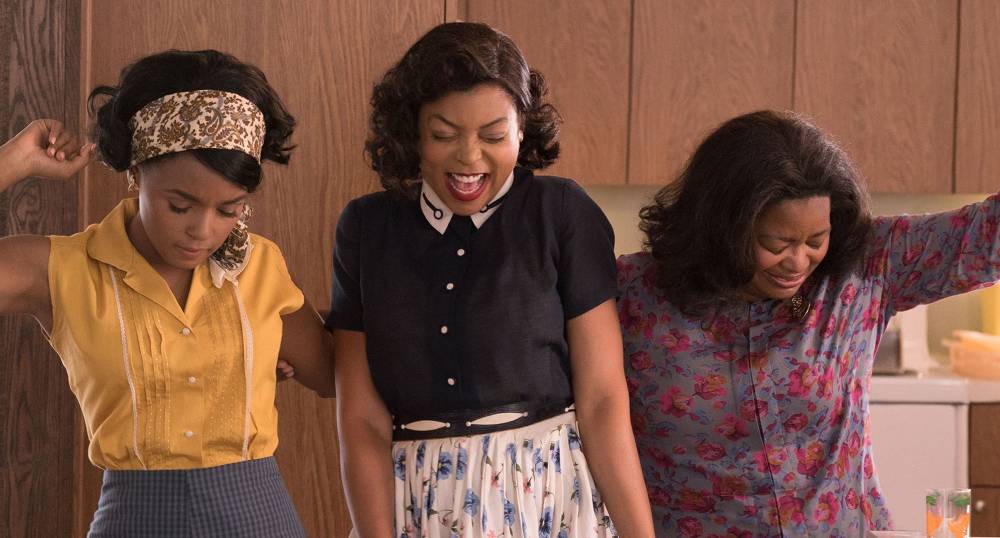 From a young age, Katherine Goble (Taraji P. Henson) was gifted with numbers. Gaining a full-ride scholarship to schools throughout Virginia, she became the third African-American to earn her PhD in math, graduating at age 18. She began work at NASA as a computer, alongside her two friends, non-supervisor Dorothy Vaughan (Octavia Spencer) and non-engineer Mary Jackson (Janelle Monáe). The three women are amongst the top of their fields due to their high intellects, but barriers keep them from attaining the classes and careers that their minds deserve. However, due to a desperate need for numbers in order to finally put an American man into orbit, Director Al Harrison (Kevin Costner) reaches out to hire Katherine to assist in the calculations that will make John Glenn (Glen Powell) the first United States citizen to orbit the Earth.

I’m not going to pretend like this film is perfect. It’s kind of a cookie cutter biopic, filled with cheesy/borderline stupid lines (I swear to God, there is a scene where Kevin Costner literally breaks down the segregated toilets and announces “We all pee the same color!”) and moments where they want you to applaud. However, to that I say, “So what?” Why is it a bad thing to give audiences what they want, especially if you do it in such a fun way? Audiences want an uplifting story? Give them an uplifting story. Audiences want good performances? Give them good performances. Audiences want a bouncy score/fresh songs to entertain them? By God, give it to them. Why is it a bad thing to stick to tradition if it’ll be done so well? There’s nothing original under the sun, so you might as well just be really good at what you do. And that’s what Hidden Figures does so well. It tells a story that we don’t know, tells it in a way we do, and tries to keep us entertained for the ride.

What’s nice about the film is that it just seems so optimistic about things. Anytime it veers towards melodrama, or tries to delve into more serious subject matter, it’ll course correct to remain inspiring. Any time they give you a villainous moment to sneer at (i.e. a rude librarian or an uptight boss), they’ll give you Kevin Costner and John Glenn to remind you about why standing up for what’s right when you see the best of us kicked to the ground is the best course of action. And they even try to find a middle ground on how they paint race relations-while the “villains” here are nowhere near as nuanced as, say, this year’s Loving painted the antagonists, they still try to put their own spin on things. Vivian Mitchell isn’t portrayed as just some evil white woman who hates the African-American community (well, not entirely). She’s just some woman who is out to enforce the rules as closely as possible, even if that means she has to hold them down doing it. She even tries to patronizingly explain to them, “You know, despite what you may think, I don’t actually have a problem with you folk.” While it’s still simple enough for a general audience to understand, this is not just the black and white portrait of race that most films of this sort take. There’s some thought and some weight that went into writing this film, and it shows.

What makes this story so important, however, isn’t just the one issue. Yes, race is the heart of the movie, and it handles it deftly and expertly. But there’s more to it than that. It’s about what makes America great, and what can make America great. I don’t mean this as any form of slogan or true belief. I refer to it as an idea, in the sense that John F. Kennedy or Martin Luther King meant it as an idea. It’s the idea that America can learn to overcome its prejudices and flaws to achieve the impossible. The optimism that can be seen in our heroines, who face discrimination at every turn for not only being black in a white field, but being women in a men’s field, is the type of optimism that makes greatness possible, and it is shared and recognized by future people’s champion John Glenn. It’s an optimism that runs through this film, teaching us why math is important, the oft-forgotten space race was remarkable, and why it’s just generally great to be optimistic. It makes you feel good about yourself to be alive, and in a time when people are forgetting, ignoring, or quashing this feeling, it’s a wonderful reminder of what working together without any sort of bias or hatred can bring about.

What also helps it along is an electrifying score by Hans Zimmer and especially Pharrell. It’s been a long time since a film had a score like this. I’m referring to movies where an artist will write actual original songs that actually fit into the film, instead of just focusing on the cash grab. That’s not to say that these songs aren’t pop enough to play on the radio-indeed, I’m hoping to hear “Runnin,’” “Able,” and “I See A Victory” playing in the near future, even if I have to buy the album to do it. I just mean that they aren’t just thrown in to try to bring in a new audience or gain awards buzz. They’re just interested in furthering the storytelling through music, and I think that task is successful.

In terms of the acting, the weight of this movie has to rest on the shoulders of Ms. Henson, and she performs the job adequately. She plays Katherine as the perfect balance between smart, spunky and nerdy that makes the best heroines sing. Sure, she holds back any of her flash that she brings to roles like Queenie in The Curious Case of Benjamin Button or Cookie on Empire, and she may rely on the “nerdy” character tic of constantly pushing up her glasses any time she says something smart, but it helps to make her a genial character, and I’m not sure of anyone who could play the role better. Getting the better chances to shine are her two co-stars. In many ways, Spencer is just reprising her role from The Help in her portrayal of Vaughan, but where’s the problem in that? Minny was a strong, independent woman with sharp comedic timing, and Spencer certainly has that in abundance. And here she gets to throw in a dash of leadership that poor Minny never had, as Dorothy is much more in control of her own fate than Minny ever was. However, my favorite of the trio is Ms. Monáe as Mary Jackson. Known more as a singer than an actress, Monáe made her debut earlier this year in Moonlight, and proved she had talent. However, her excellent performance in that pales in comparison to her work in Figures. Commanding the screen each and every time she appears, she’s smart, spunky, funny, beautiful, and electric, all at the same time. She gets the first zinger of the film, and her fight to attend night classes and earn a job as an engineer was the first time I welled up in the film. She’s the film’s secret weapon, and I feel it is the performance people will be talking about when they walk out.

Meanwhile, the characters outside the main trio each play their parts convincingly. I’d like to think it’s a massive inside joke that they cast literally the whitest actors I can think of, Kirsten Dunst and Jim Parsons, to play the more bigoted characters our heroines encounter, but whether or not that’s intentional, they play their parts well. Kevin Costner, meanwhile, is officially in Veteran Actor mode, showing up and giving his classic performance that seemed astonishing back in the day but seems borderline laughable now. Luckily for him, it works for the role, not unlike Sylvester Stallone in last year’s Creed (but nowhere near as astonishing), and he brings a heart to an otherwise miserly role. And moderately unknown Glen Powell, who was far and away my favorite actor in this year’s Everybody Wants Some!!, makes an appearance as astronaut John Glenn. Glenn passed away literally a month before this film’s release, and I can think of no greater way to honor his legacy than Powell’s performance in this film. Powell portrays Glenn as an honorable man who knew what was right, wasn’t afraid to flaunt traditions and expectations in order to do what was right, and enjoyed cracking a nice joke along the way. Powell’s performance is the perfect legacy for a man who prided himself both on what his piloting skills did for this nation and for what he was able to do in the Senate for both African-American and women’s rights.

Hidden Figures is the feel-good film that 2016 has desperately needed. It’s inspirational, it’s educational, and it’s entertaining. It allows us to honor three women, as well as a whole team that history has ignored or forgotten, and see a better way forward, without feeling scolded or nagged. It just shows us that certain things are right, they should be treated as right, and in doing so, everyone is happier. It shows you a world that you would rather live in, and makes you feel good about what can be accomplished. So what if you’re afraid you’re not going to understand the math in the film? I’m math illiterate, and I’m not afraid to call this one of the best films of the year. And you shouldn’t be afraid either.